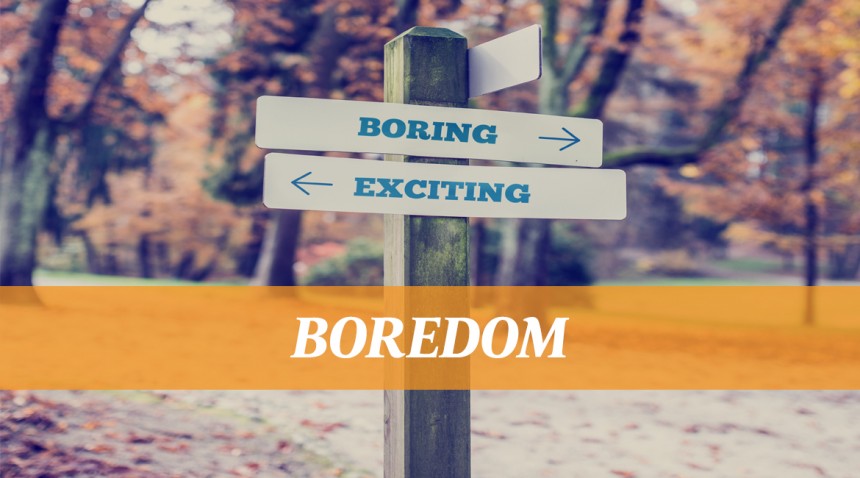 A number of years ago my good friend John Kanary and I were hustling around an airport attempting to book a flight with anyone who could get us to where we were going. Our plane had been cancelled and we had a few hundred people coming to a seminar we were to conduct in another city.

I’m sure you have found yourself in a similar situation; it can be frustrating to say the least. These happenings are fairly commonplace in my business because of the travel involved. I wouldn’t want to guess at the number of times we went one place and they sent our bags to another. I have reached the point where I carry my bags; I never check them.

At any rate, this particular day John said something that brought a smile to my face and caused me to appreciate how I spend my days. He said, “You know, you get hassled, messed up and periodically a little uptight in this business, but you never get bored.”

Boredom has to be the most life sapping, mental disease you can be afflicted with. It is highly contagious and people of all ages are carriers.

Whenever you hear a person say, I’m bored, let those words serve as a warning. They are actually telling you they are boring and if you hang around you may catch it. Put them out to pasture in a hurry and get on with life.

The most accurate definition of boredom I have ever heard is this – Boredom is the absence of a creative idea.

Generally, people who are bored are not aware of the cause of this problem. If you or someone you love find that you are bored frequently, realize there is a simple cure.

Begin to think immediately of a better way to do something. The creative juices are within you but you must turn on the tap. Those who are bored are not living; they are dying. When their heart stops beating, it will be a formality.

The best way to do anything has never been thought of. Get on a creative improvement kick and jar others mentally into the same activity.

Believe me, you may get uptight every now and then but like John Kanary said, “You will never get bored.”

See Bob Proctor live all weekend from the comfort of your own home. His first ever Seminar of the Century will be LIVE Streaming. You can get all the details and register here: http://www.seminarofthecentury.com