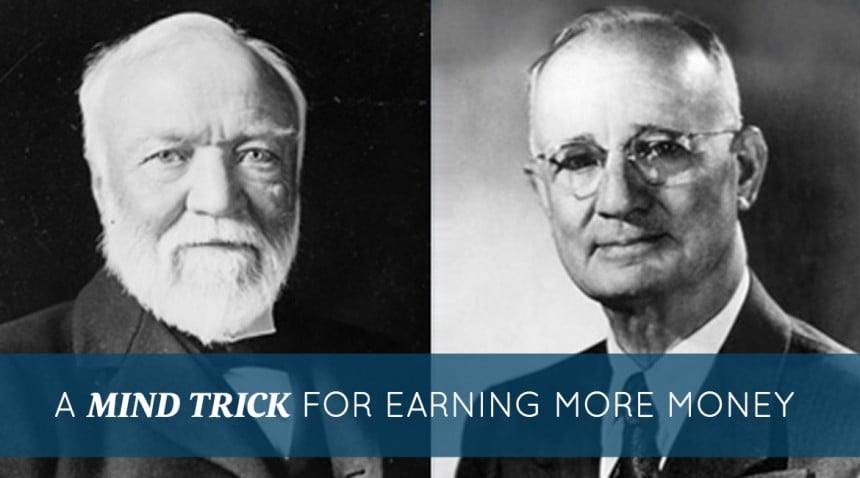 “The second you commit, it begins to move into form.”

What thoughts went through your mind when you heard that statement in the video? Were you excited and hopeful? Or did you think, “That sounds great, but I don’t know how I’ll ever make $100,000!”

Listen, I get it. When you’re strapped for cash, it’s hard to stay focused on a hundred grand. But it’s also hard to have a happy and fulfilling life when you don’t have money to do the things you want to do.

So the question is, which one would you rather be committed to—your ideal situation or your current circumstances?

If you want $100,000, for example, but you have trouble consistently focusing on it, do something to help your mind get on board. Create a meaningful affirmative statement about it, and then read it aloud to yourself at least twice a day.

That’s what Andrew Carnegie asked Napoleon Hill to do before Hill took on the task of interviewing 500 of the world’s wealthiest people.

Carnegie said, “Napoleon, you’re going to have lots of problems. Everything in you is going to tell you to quit because that’s the easiest thing in the world to do for weaklings. I don’t think you’re a weakling, but you’re going to need something to help you.

“This is what I want you to write:  Andrew Carnegie, I’m not only going to equal your achievements in life, but I’m going to challenge you at the post and pass you at the grandstand.”

Hill threw the pencil on the floor and he said, “Now you know darn well that can’t happen!”

“I know it won’t happen unless or until you fix that idea in your mind.  Now, Napoleon, I want you to make a commitment to me that you will read the statement every morning and every night for 30 days. You can do anything for 30 days,” replied Carnegie.

And guess what? He did it! It has been reported that Andrew Carnegie created 53 millionaires, but Napoleon Hill has created millions of millionaires.

The process that Hill used is called autosuggestion, and he included it as the third step to riches in Think and Grow Rich. Autosuggestion is, as Hill puts it, “playing a perfectly legitimate trick on your subconscious mind.”

You see, the more often you repeat the statement, the more you believe it. As your belief increases, so will your emotions and you’ll start to say the statement with feeling. Once the subconscious mind receives any “emotionalized” instructions, it must hand over to you a practical plan for achieving the goal.

If you’d like to earn more money, whether it’s $100,000 or $10,000,000, make sure that you’re not too busy working to spare any time for thinking. You see, people who make a lot of money don’t work hard. Once they’ve set the ball rolling, wealth just accumulates upon wealth.

Instead of working really hard, read and reread Think and Grow Rich. Study it line by line, paragraph by paragraph so you can figure out what Napoleon Hill was really saying. And then act on it. Do that, and I guarantee you will earn the amount of money that you desire.