I Dream My Life, Then Live My Dream 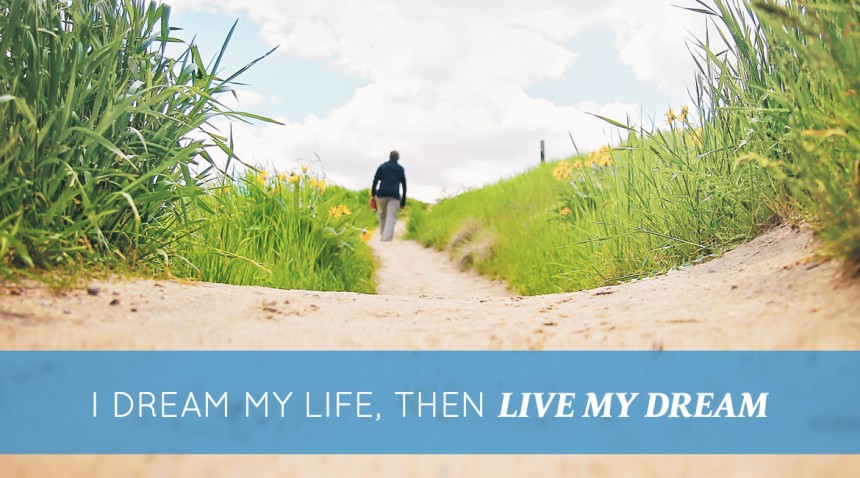 Holding the chortling newborn for the first time, my aunt whispered between goo-goos and ga-gas, “You’re gonna have a good life. I can just feel it.” Later, she said I had an indisputable cheerfulness and positivity evident even in diapers. Although her words foretold the truth, it wasn’t always apparent to me.

Growing up the middle child, I endlessly cleaned up or got blamed for my sibling’s messes. Oftentimes, I ran interference or ran away. The latter caused the most trouble. But it wasn’t running away from a given situation or person that made things difficult, but fleeing myself.

Isn’t it interesting what we agree to as children? Like staring out the window in school only to be told to stop daydreaming. Or belting out a song with passion only to hear our voice is obnoxious and off-key. Or bleeding emotions on paper attempting to fulfill a dream of being an author only to receive mediocre marks because “It’s been done better before.”

Of course, all of these appear ridiculous now. But as children, we don’t know. Believing them as truth is what matters. I heard all of those things and believed them until I decided not to anymore.

For years, I didn’t actively use my imagination. Instead I coasted through life relying on the conditioning of my upbringing to control my thoughts and my results. I didn’t sing either. And the worst part is that I didn’t write. Actually I did, but in secret exclusively for my own pleasure.

Then I began studying how to use my mental faculties. It became apparent very quickly that I had always lived life from the outside in letting my senses and my environment dictate my results.

Slowly I confronted the self-limiting beliefs that held me back. One by one, they fell when I honestly evaluated them.

The first thing I did was to let my imagination soar, dreaming of life’s possibilities. I asked myself, “What do you really want?” Things started to change for the better. “Strange,” I thought, “but probably coincidence.”

More testing was needed to stave off the uncertainty. I decided to try out singing in a choir. What I found out was that not only do I love to sing, but I have a nice voice. “Interesting,” I said, slaughtering another dragon-lie from my youth. “Still not enough to convince me.”

With slight apprehension, yet burgeoning confidence, it was finally time to tackle my lifelong dream of writing a book. This was a chance to prove to myself that living from the inside out was unquestionably the only way to create the life of my dreams. In order to do that, I needed both writing and imagination – a very potent combination. As if dormant, invisible forces exploded into action in my mind, the vision of the story took shape. When I sat down to write, the problem wasn’t coming up with the story, but rather typing fast enough to keep up with the flow of words coming through me. Thirty days later, my rough draft was complete.

After four long years of work, April 28, 2015 marks the launch of my debut young adult fiction novel, Stella And The Timekeepers, and all I can say is, “Wow. Death to the evil self-limiters picked up along the way.”

Being on this side of self-doubt, feelings of low self-worth and the courage to breakthrough, I found freedom. It’s a liberty I probably haven’t felt since I was being coddled in my aunt’s arms. Someone recently said to me, “As humans, we are not trees. We can change.” The first and most important thing to realize is the life you always dreamed of living is on the other side of you…if you dare to dream it.

What is your dream? What has been holding you back? Because you can do what you always dreamt of doing, but you must dare to do it.

For more information about Mick, visit his website at: http://mickpetersen.com/