An Illogical Strategy to Shift Your Toughest Paradigms 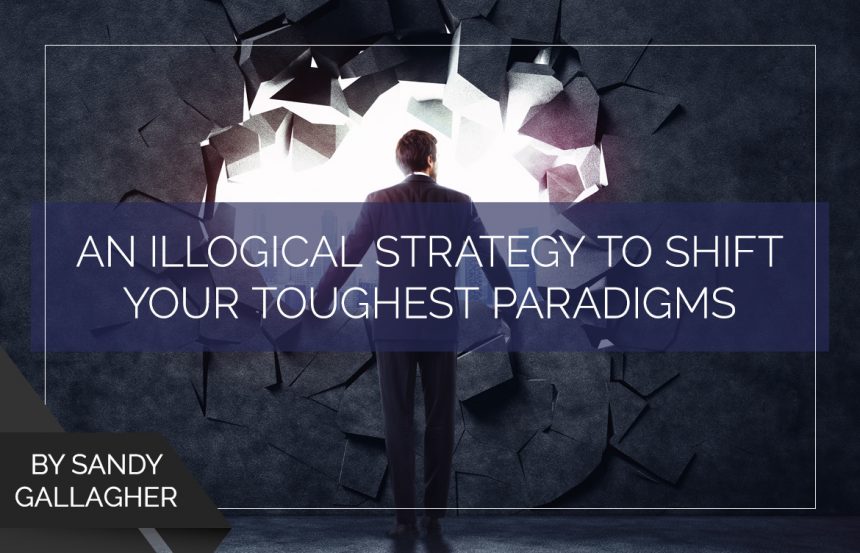 Despite their best efforts and intentions to make significant advancements in life, more than 90 percent of the population go through their entire life getting close to the same results.

So, what holds them back?

You see, our paradigms control our results. Try as we might, we can’t outperform them. Unfortunately, only a tiny percentage of people understand that. And an even smaller percentage know how to change their paradigms to get the results they want.

It’s an enormous problem because millions of people work really hard to improve their lives for years or even decades with very little to show for it. Many of these people try to change everything under the sun to get their desired results. Everything but themselves.

But here’s the deal…

When you really get down to it, your behavior causes your results. So if you haven’t been able to get the results you want, it’s NOT the economy, your boss, or your spouse that’s the problem.

What’s stopping you doesn’t have anything to do with what’s happening around you. It has to do with something inside you, your subconscious conditioning. That is what a paradigm is—a group of habits that are programmed into the subconscious mind that controls your behavior.

So, instead of waiting for the economy to improve or for your boss to recognize your potential, let’s talk about what it takes to shift your paradigm.

It’s inconvenient, but it works

To change a paradigm, start thinking of something in your life you’d like to change or do better.

Let’s say you have a habit of sleeping in and want to get up earlier. That’s a typical result that many people have a problem with.

To get you started, think about the ideas you have planted in your subconscious mind and the habits you have formed that keep you sleeping late, lying in bed after waking up, or hitting snooze when your alarm goes off.

Next, write out the specific negative results you are getting. Write any behavior or result you can think of that you don’t want.

“I always sleep later than I want to. And when I wake up, instead of getting up right away, I tell myself I just need another 10 minutes. Then, I stay up late watching TV at night instead of going to bed at a decent time, making it hard to get up early. It’s a vicious cycle.”

Then, ask yourself, “What is the polar opposite of what I don’t want?” And write out the answer in the present tense:

“I am so happy and grateful now that when I wake up, I get up. And at night, I go to bed at a reasonable time that allows me to get up at 6:30 each morning.”

Finally, write the above statement out one hundred times a day for 30 days.

I know your logic will tell you that this is silly and won’t work. But even though it seems illogical, do it anyway.

That would have been a crazy thing for me to say 13 years ago. Back then, I was the poster child for logic and had been all my life. You don’t get straight A’s through school … graduate as the top law student in the country… and close $100 Billion in deals by being illogical.

But when I started to study Bob’s teachings for hours every day, I quickly discovered that if I was going to make the change that I desperately wanted, I would have to do illogical things.

Because our paradigm dictates our logic.

Our logic controls our habitual behavior.

And our behavior produces our results.

So, if you or I want to be, do, or have something significantly different, we must do things outside of the box we have built for ourselves. We need a strategy that is based on uncommon sense.

And writing the same statement 100 times a day for 30 days in a row is not something the 90-something percent of the population that is stuck is willing to do. It goes again their logic.

However, if you do it, you will start to get up earlier because you will have programmed a new and desirable idea into your subconscious mind over 30 days. The new idea will take root and then take over because the old idea of sleeping until a particular hour and then staying in bed for another 15 minutes after waking up will die from a lack of nourishment.

Give it a whirl

Do this exercise for a relatively simple habit first. Then, realize that it will work for any habit if it works for that habit.

It will work in sales. “I’m so happy and grateful now that I’m in front of or on the phone with a prospect before 9:00 a.m. every working day, asking them to buy.”

It will work with changing your diet. “I’m so happy and grateful now that I enjoy eating three servings of fruit and four servings of vegetables each day.”

It will work with reading. “I’m so happy and grateful now that I read for 30 minutes every morning before 8:00 a.m.”

It will work with everything.

You can change any habit by planting a new idea in your subconscious mind by repeating it consistently. Repetition is the first law of learning.

It’s a simple little thing, but you’ll see that it works like pure magic if you try it.

Now, I’m curious what you think about this strategy…

Do you think it will work? Are you willing to give it a try? Do you have a habit in mind to start with?

Let us know in the comments below. We’d love to hear from you!