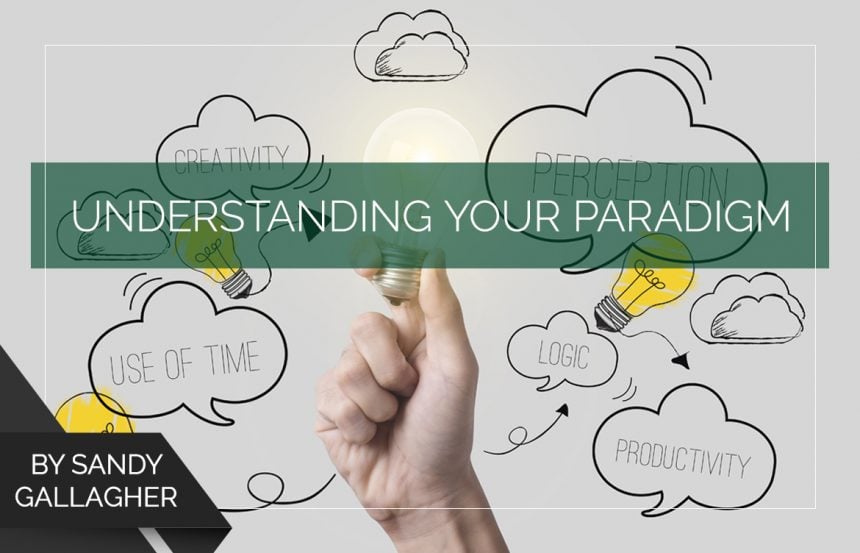 Here’s a question many people grapple with:

If what people assume to be average results are sub-par, why are they so popular?

It’s because most people have ingrained beliefs that are extremely hard to overcome.

You’d think they’d want nothing more than to break free from their mundane and mediocre existence, but they continue to stroll through their lives, accepting their results as if there’s nothing they can do about it. They refuse to believe there is more or better.

What’s keeping so many people stuck?

What is a paradigm?

A paradigm is often a collection of beliefs that are held by a group of people. It can be likened to a mental program being installed in your subconscious mind.

People tend to underestimate the power of their paradigm even though they have almost exclusive control over their habitual behavior. They think using their willpower is enough to change habits they have had all of their life.

We see evidence of it all the time:

A man decides to get in shape. He forces himself to go to the gym five days a week, run three miles on the weekend, and eat smaller portions. Then, his boss gives him an important project. He immediately puts most of his attention into his work and starts working longer hours. A few days later, he skips his trip to the gym and a week later, he stops going altogether and starts eating junk food at his desk.

A woman wants to feel better about herself. She starts getting up early a few days a week to read and do yoga. And she makes sure she looks good from head to toe each time she leaves the house. After a couple of weeks, she gives up because she says it’s not working, and she has too many other things to do.

It’s not surprising when you consider that virtually all of your behavior is habitual. From the moment you get out of bed each morning until your head hits the pillow at night, almost everything you do is part of an automatic routine. That’s why it requires more than willpower to change these deeply ingrained routines.

To ignore the power of paradigms is to put yourself at risk when exploring the future. Your future will look much the same as the past until you understand the power of your paradigms and what it takes to change them.

Understanding the power of a paradigm

Your paradigm has enormous influence over most aspects of your life. It controls your…

The paradigm puts a box around every one of these areas, and no matter how hard you try, you can’t knock down its walls until you change the habits that make up the paradigm.

Let’s look at some everyday habits that can impact each of these aspects of life.

We are often our own worst critics, but when you have a habit of continuously putting yourself down, you are implying or feeling that you are not good enough. But for what and for whom? And according to whose standards?

If this habit or belief is strong in you, then how can you possibly create a happy, prosperous, healthy life? In one way or another, your mental programming would always contradict it.

Whether it’s on a computer, TV, tablet, or phone, millions of people spend excessive time staring at a screen each day.

Doing so is a waste of valuable time because it keeps you from engaging in meaningful activities that can significantly improve your quality of life.

It’s common for people to believe that there’s only one way to do things or one correct answer to a problem, question, or challenge.

However, if you think that most questions generate only one correct answer, you eliminate countless opportunities and possibilities from your life.

This way of thinking stems from an educational system that ingrains in our minds the idea that it’s better to memorize correct answers than look for them yourself.

That approach might work in mathematical problems, but it’s incredibly limiting anywhere else. Whether it’s sales, marketing, or deciding the next step to take in your life, there’s never only one correct answer. There are many different creative approaches to everything in life.

Do you put things off because you “work best under pressure?” Perhaps you stay up late or all night to finish a project or cram for a test. Or you routinely pay late fees for bills and buy gifts on the way to the party.

Procrastinators sabotage themselves to avoid doing something they don’t want to do. The outcome is often poor-quality projects, wasted money, and late arrival at events.

This is not about time management; it’s about being less effective than you can be by allowing fear, outside motivations, or a sense of rebelling to control your actions.

Whether it’s fear of failure or success, fear of making a wrong decision, or rebelling against controlling bosses, friends, or authority figures, the habit of procrastinating never brings out the best in you.

Many people take great pride in multitasking. However, doing more than one thing at once is actually less productive than focusing on doing a single thing. When you try to do two things simultaneously, your brain cannot perform each task successfully.

However, when you eliminate distractions and put all your attention on one task, you can accomplish a tremendous amount in a short period.

Most people’s thoughts are random and chaotic because they constantly react to what they see, hear, taste, touch, or smell. It isn’t easy to think logically when reacting to everything around you. And if you want to improve any area of your life, it’s impossible to do so if you’re usually focusing on your present circumstances.

Thinking and acting logically require orderly thoughts. If you want orderly thoughts, develop a habit of thinking about what you want and responding to life instead of constantly reacting to it.

Wealthy people are comfortable talking about money. Most people, however, are uncomfortable with the idea of money, and therefore, they habitually avoid talking about it, and they don’t set goals to make a lot of it.

If you can’t easily see yourself enjoying abundance and financial freedom, try changing your beliefs about money and setting goals that will help you bring more of yourself to the surface.

How to determine what your paradigm is

The best way to identify your paradigm is to look at your current results. So I encourage you to take a few moments to picture your life and consider the following questions …

Answering these and similar questions will help you zero in on your paradigm, what’s controlling the results you are getting in your life, and identify which habits are working for you and which are working against you.

The good news is if you’re not happy with your results and you’d like to do better, you can do something about it.

How to change your paradigm

You can’t change your paradigm with self-will alone. In fact, there are only two ways to do it.

One is an emotional impact—when something hits you so hard, your life will never be the same. It’s usually negative, but it can also be positive.

The second way is to change the paradigm in the same way it was formed—through the repetition of ideas. It is repeatedly exposing yourself to a new idea to replace an old belief(s) in your subconscious mind.

To get started, choose a new belief that is aligned with the results you want and the habits that will lead you to those results. Then impress that idea—by focusing on it, visualizing it, and repeating it with feeling (as if you already have what you want)—on your subconscious mind repetitively.

You must also consciously and deliberately replace “bad” habits with good habits. Otherwise, you might form another bad habit to take the old habit’s place. The download below walks you through how to replace a habit step by step.

Changing just a tiny part of the old paradigm can make an enormous difference in the results you enjoy in every area of your life.

But make no mistake. You cannot change your life permanently until you change your paradigm.