Living in Harmony with the Vacuum Law of Prosperity 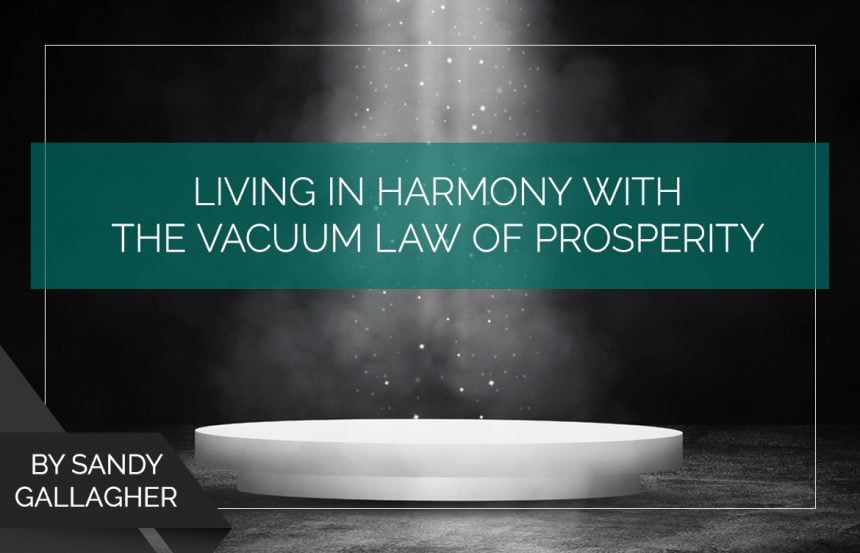 The Universe works in an orderly and predictable manner.

That’s because it is governed by laws.

You may have heard of the Laws of Attraction, Cause and Effect, or even Gestation. However, if you don’t understand the Vacuum Law of Prosperity, I hope you’ll keep reading. Because, as I explain below, living in harmony with this law can start to change your life rather quickly and dramatically.

However, before I get to the nitty-gritty, I’d like to share a story about Bob Proctor and his Aunt Marg for a bit of background and perspective…

Next year will not be different

Marg was more like a sister to Bob than an Aunt. Marg and her husband, Don, had several kids, but they didn’t have much money. In fact, their family would have been considered poor by most people’s standards.

Don worked as a millwright on the other side of town from their home. They didn’t have a car, so he’d have to take public transportation to and from work, and he would work overtime every day so they’d have enough money to get by.

One day, Bob dropped by their house close to Christmas. Don and Marg were doing everything they could to get credit cards from various department stores to buy presents for their kids.

As Bob watched them scrambling, Don proclaimed, “Next year will be different.”

Bob said, “You know something, Don, next year is going to be exactly the same as this year. Every year, you say the next year will be different, but it never is because you never change.”

So, Bob decided to invite Marg and Don to one of his seminars. It was an eight-week seminar that ran for two and a half hours a week.

Even though they had very little money, Bob made his aunt and uncle pay for the seminar because he knew they likely wouldn’t keep coming each week if they hadn’t spent their hard-earned money on it.

Marg and Don didn’t understand what Bob was talking about for the first couple of weeks. But then Bob got to the point in the seminar when he started talking about goals.

Bob stood at the front of the room and asked, “What do you really, really want?”

And Marg realized it had been such a long time since she had thought about what she wanted that she couldn’t think of a single thing.

But as she continued to think about it, things started to come to mind. So much so that Marg was able to fill out a few pages of things she wanted.

Then Marg’s life started to change

One day, while Bob was having coffee with Marg in her living room, she asked if he would mind if they moved to the kitchen.

Bob said he didn’t mind and then asked her why she wanted to sit in the kitchen instead of the living room.

Marg said, “I hate sitting in that room. I hate the curtains that are hanging around the front room window.”

“You don’t hate those curtains, Marg; you only attract things to you that you are in harmony with. If you really didn’t like them, you’d get rid of them,” Bob said.

Marg explained that she couldn’t take the curtains down because she didn’t have anything else to put there if she got rid of them.

What Bob said next changed EVERYTHING

“Marg, even if you had something to go there, you couldn’t put it there because you already have something there.”

And then, he explained the Vacuum Law of Prosperity.

When he finished, Marg got up and started taking the curtains down. Don walked into the room and asked what she was doing.

“I’m getting rid of these curtains!” she announced.

It didn’t happen overnight, but eventually, Marg was able to buy curtains that she loved. And then, she replaced the living room furniture and other items in the house with things she loved.

Because of Marg’s growing understanding of the Vacuum Law of Prosperity, Marg and Don started their own business. After that, their entire family began to enjoy the “finer things in life” that they had previously been unable to experience.

The most valuable lesson

Sometime later, Bob asked Marg about the most important thing she had ever learned from him.

“The Vacuum Law was the greatest thing. Everything in my life changed when I started to understand it,” she said.

So what is the Vacuum Law of Prosperity?

In its simplest terms, it’s the principle that nature abhors a vacuum.

To give you a more direct idea of how it works, take a few moments to do this…

Look around you and focus on one thing within your sight right now.

Now, let’s say you’re looking at a lamp. When you think about it, you realize that you can’t put anything where that lamp is unless and until you move it so something else can take its place.

Yet, we find that we want things to come into our lives, but we don’t create room for them.

When Marg started to understand that nature abhors a vacuum, she started getting rid of things she didn’t like or want to make room for the things she did want.

Are you living in harmony with the Vacuum Law of Prosperity?

If you have things in your life that you really don’t like or don’t want, get rid of them. Sell them, give them away, or throw them out.

When you make space for the good that you desire, that’s when the things you want can and will start to come. This law is one of the most important things you can ever learn.

How can you use this law to create space for the greater good in your life? Use the download below to help you work through this process.

It’s so simple, yet most people don’t make space for the good that they desire. And if you don’t create the room, you’re not going to get it. That might sound like a big claim, but remember, we’re dealing with universal law. It’s not human-made, so humans can’t change it.

Start making space for your desires today, and I promise, next year will absolutely be different.