If You Can’t Say Anything Nice 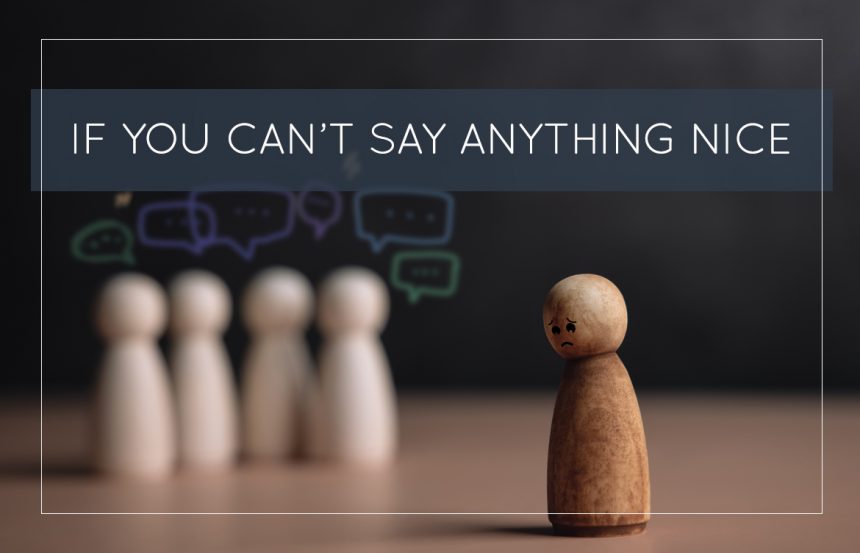 Tragic stories and new data on the prevalence and harmfulness of bullying have made us all more sensitive to the ways our words can hurt others – merciless criticism, nasty sarcasm, hurtful nicknames, malicious rumors, and careless gossip.

In Words That Hurt, Words That Heal, Joseph Telushkin writes about the moral implications of what we say. He points out that most people choose their clothes more carefully than they choose their words, yet, “Unless you’ve been a victim of terrible physical violence, chances are the worst pains you have suffered in life have come from words.” The simple fact is that what we say about others can not only hurt feelings, it can damage reputations and affect the way the person we talk about is treated or thought of.

So much for sticks and stones will break my bones, but names will never harm me.

To prove how often we engage in gossip or negative words, Telushkin challenges his readers to go for 24 hours without saying an unkind word to or about anyone.

Ethical speech – speaking fairly, respectfully, responsibly, and carefully about others – is an easy duty to neglect. Here’s an easy test: ask yourself how the person you’re talking about would feel if he or she overheard the conversation. And would you be willing to say what you said if the object of your gossip was present?

In the end, I was left with a greater appreciation for the advice I’ve heard often but regularly ignore: “If you can’t say something nice, don’t say anything at all.”