The Power of a “Silly” Idea 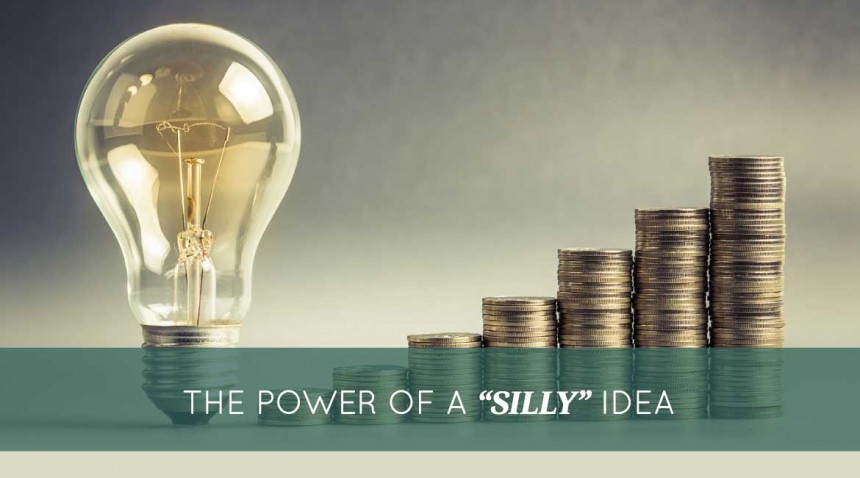 “I know this is probably a silly idea, but…”

If there’s a phrase in the world that sets me right on edge, it’s that one—or any one like it that preemptively diminishes or dismisses the value of an idea.

I can’t tell you the number of times someone has sat down across from me and prefaced their conversation with some variant of, “I know this is probably a silly idea, but…”, then proceeded to describe the most stunning, spectacular concept you could possibly imagine. Something there’s an enormous market for. Something that millions of people are absolutely crying for someone to provide them with.

What I’ve found, however, is that very few of these people really do think their idea is silly. They love their idea. They think it’s got lots of potential.

What they mean, when they say this, is that they’re afraid other people are going to think it’s silly.

And do you know what? They’re probably right.

Can you imagine how silly the idea of a flying machine must have sounded to most of the people living at the time the Wright brothers were concocting their vision? Not just silly. Insane … or worse. Their own father told them it was a sin!

Thankfully, they didn’t listen. Neither did many millions of other whose “silly” ideas became thriving businesses, wonderful products and invaluable services that touched and changed countless lives.

Yet how many more people are there who did listen? How many magnificent ideas never saw the light of day, because their originators let their fear of being thought of as silly (really, their fear of failure) win out over their dreams?

The number is incalculable … and heartbreaking.

A few years ago, Sandy Gallagher and I were discussing the upsetting tendency among people to dismiss their own ideas. Wouldn’t it be great, we thought, if there were a safe place people could go to give shape and life to those ideas instead? A kind of retreat from the world where someone could spend a significant, uninterrupted amount of time mapping out their idea’s path from concept to reality … receive support, encouragement and honest, constructive feedback throughout … and acquire all of the practical knowledge, tools and resources they’d need to make the journey a success.

Would some people have thought that a silly idea? Probably. But we didn’t. So we went ahead and made it happen.

We called it Matrixx. And 15 Matrixx events later, it remains one of the most powerful experiences I have ever witnessed or been a part of.

Matrixx isn’t cheerleading camp. Oh, there’s plenty of motivation. But the whole point of it is to move quickly from thought to ACTION. To that end, it’s intense, near-nonstop work—some of the most energizing and productive work you’re every likely to do.

Amazing things happen during the six days of Matrixx. We’ve watched an invention go from a vague picture in someone’s mind to actual manufacturing blueprints. We’ve seen entrepreneurs and business owners experience epiphanies that instantly transformed their bottom line. We’ve even had people arrive with no concrete idea at all—just a sense of wanting something—and leave with an entire business mapped out in exquisite detail and the wheels to bring it to life already in motion.

LIVES CHANGE at Matrixx. Many lives. Every single time. We’re in the midst of our latest Matrixx at this very moment, and I’m watching it happen right now.

Here’s what doesn’t happen at Matrixx:

You aren’t told your idea is silly, stupid or in any way unworthy of serious consideration. Matrixx takes you out of the ordinary world of doubters, skeptics and small-minded nay-sayers, get you into a small group of individuals who believe in the power of ideas—theirs and yours—and are there to bring them into being.

You aren’t left on your own to figure anything out. You’ll work with both me and Sandy in intensive one-on-one sessions, during which we focus exclusively on you, your goals, and what you must do to achieve them. You also work closely with your fellow participants in structured small-group sessions designed to facilitate very significant breakthroughs and progress, very rapidly.

You don’t leave without a CONCRETE, HIGHLY-DETAILED understanding of:

You aren’t on your own once it ends. You and your Matrixx group become a unit, bonded in a unique and profound way. The relationships you’ll form will last for years, and give you a Master Mind network like no other. I know many past Matrixx participants who connect weekly to keep each other accountable and moving forward.

Our next Matrixx is coming up. Space is limited, and it goes fast. So if you’re interested, I suggest you click here right now to learn a bit more and secure your spot.

Because I would dearly love to see you and your gorgeous, glorious, brilliantly “silly” idea there!