Snap Out of Bad Habits 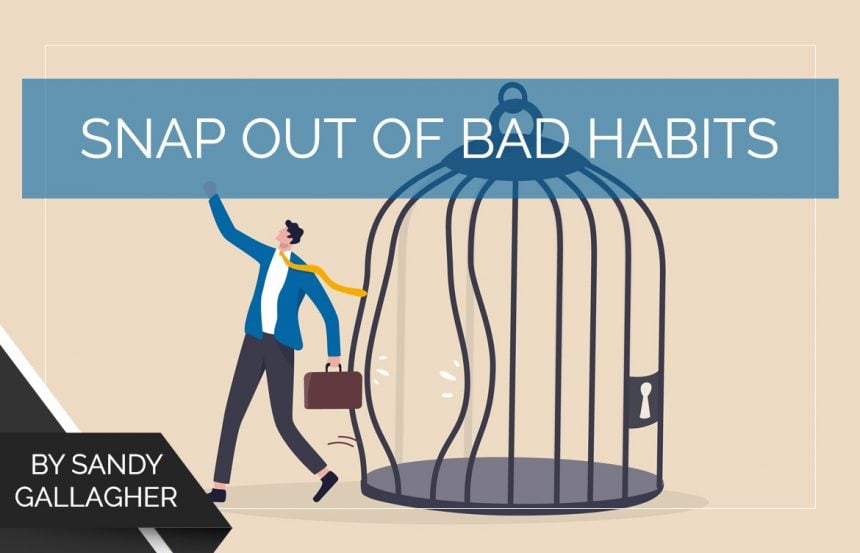 Habits are a normal part of life.

Good habits, such as showering, brushing our teeth, and paying our bills, will generate the results we want in life. However, bad habits, such as smoking or watching too much television can destroy everything.

I have some habits that don’t serve me well. We all do. The trick is becoming aware of them and then taking the time to weed them out of our lives.

Before we get too far into this, let’s establish what a habit is.

A habit is an idea that has been planted in the garden of your subconscious mind and then fed repetitively. After sufficient time, you act on the idea without giving it any conscious thought.

Here’s an example of how a habit is formed.

Imagine you’re about to clean the kitchen after a small dinner party. After gathering all the dishes and filling the sink with sudsy warm water, you start washing and rinsing the glasses.

Suppose a friend walks in and says that you should wash the plates and silverware before cleaning the glasses.

What would you do?

You’d feel awkward about washing the dishes in that order and would likely refuse.

That’s because when you were young, a parent or some other caretaker always washed the dishes in the same order—glasses first. By watching, helping, and then eventually doing them yourself, the idea of washing dishes in a specific order was planted in your mind over and over until it became “your” way of doing dishes.

Of course, you don’t just form habits for doing productive things like cleaning the kitchen. You develop habits to accomplish everything that you do, whether they’re productive or not.

Unfortunately, it’s not easy to change a bad habit, but it can be done.

For example, you might do okay by focusing on becoming more aware of your bad habits and then developing strategies to counteract them. You could, for instance, avoid walking down the hall where there’s a candy machine or resolve to avoid going places where you drink too much.

Here’s another strategy that sometimes works. You might find it helpful to visualize yourself in a tempting situation and then mentally practice engaging in better behavior. For example, if you’re going to a party and want to eat vegetables instead of fattening foods, you could visualize yourself doing that.

Either of those two approaches can help you change a bad habit. However, we believe a third method is by far the most effective strategy for changing a bad habit. This strategy involves replacing a bad habit with a good habit.

For example, many years ago, Bob used to hang around bars all the time. One day he went into his favorite establishment. He looked around the bar as he lifted his glass to sip his drink, and he thought, “There’s nothing but bums in here!”

Bob put the glass down and said, “I’m never coming back here again, and I’m never going to drink again.” And he never did.

But do you know what he did instead?

Bob stopped spending all his money at the bar started betting it all on horses at the racetrack. So, he went from helping somebody with a bar get wealthy to feeding horses.

Then, one day Bob finally figured it out: If you don’t consciously and deliberately replace a bad habit with a good habit, you’ll automatically create another unhealthy habit.

It’s best if you don’t try to change too many habits at once. It’ll become require too much effort, and you won’t change any.

However, if you pick just one or two habits to replace and stick with your plan until the new behavior becomes automatic, it will make a tremendous difference in your life.

For example, if you’re a salesperson who wants to increase your sales, don’t attempt to overhaul your entire sales approach. Instead, you might decide to develop two new habits that could multiply your sales quickly. Examples might include being on the phone or in front of a prospect by 9 a.m. every morning and asking every person outright to make a high-dollar purchase.

Where do you want to start?

Changing a habit takes a fair amount of energy and understanding. But I promise it’s worth the effort.

If you’re ready, here are five steps for breaking a bad habit permanently.

Think of a bad habit you would love to break. You recognize a bad habit by evaluating your behavior in areas where you’re not getting the results you want.

If a few habits come to mind, pick just one. The subconscious mind thrives on detail, so describe it in writing as vividly as you can.

2. Think of the Opposite

Write down every association that you connect to this habit/behavior/result. Write out everything that comes to mind when you think of the habit, whether it’s good or bad. Write it all out in explicit detail.

Next, ask yourself what the polar opposite of the behavior you want to change would be. Then, write it out on a separate sheet of paper.

When you’re finished, burn the piece of paper with unwanted behavior or results written on it. Although this is merely a symbolic gesture, it is important that you destroy it.

Write the positive behavior three to five times every day and read it frequently.

Eventually, the new idea will start to take root in your subconscious mind, which will take power away from the old habit. The harmful habit will die from a lack of nourishment, and the positive one will take over.

Next, get to the root or bottom of your habits: your paradigms.

You can do that by asking yourself the following types of questions about the habit you want to change:

Keep on digging until you’ve exhausted every possible scenario.

I hope you’ll set aside time to complete these five steps for a habit that keeps you from getting the results you want in one or more areas of your life. Although you likely won’t recognize significant changes right away, sticking with this process can change your life.