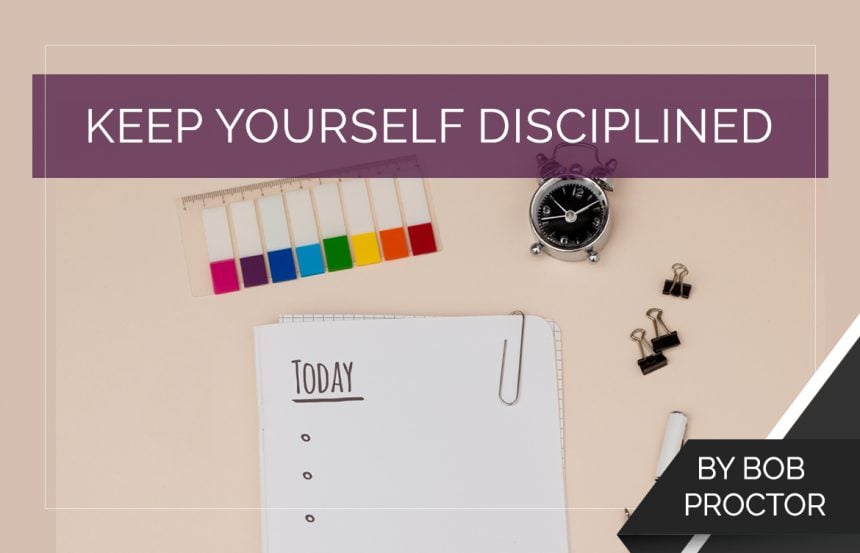 Ray Stanford, my first mentor, told me something critical during one of the first conversations we ever had.

He said, “You need only one quality to succeed. You must have discipline.”

I didn’t want to have discipline. I thought discipline meant punishment.

But the truth is discipline is the ability to give yourself a command and then follow it.

Well, it didn’t take long for me to figure out that Ray was right. You will never develop anything of any consequence if you are not disciplined. However, if you are disciplined, you can have anything you seriously want.

This is so basic, it’s so simple, yet it’s so misunderstood. People who make it in life, whether that’s becoming really rich, running a successful business, or living life on their own terms, have all developed the skill of self-discipline.

However, a common misconception about successful people is that they like doing all the things they do.

That is utterly false.

Successful people dislike the same things you do, but they do them anyway. They get up early. They make sure they’re in front of a prospect every morning at 9:00 a.m. They practice or study while others are watching TV.

Why do they do things they dislike?

Because they know that’s the price they have to pay for success. And so, they discipline themselves to do the things they know they should do whether they like it or not.

Several years ago, I read an interview with author John Grisham where he talked about his earliest days of attempting to write that grabbed my attention.

“The alarm clock would go off at 5, and I’d jump in the shower,” he said. “My office was five minutes away. And I had to be at my desk, at my office, with the first cup of coffee, a legal pad – and write the first word at 5:30, five days a week.”

His goal was to write one page every day. If it took ten minutes, so be it. Sometimes he would write for two hours before starting his job as a lawyer.

Grisham said that such a rigorous discipline was one of several “little rituals that were silly and brutal, but very important.”

I am a very disciplined person. I don’t care if anybody else is working. I don’t care what anyone else is doing. I know what I’ve got to do, and I get it done.

Of course, I wasn’t always like this. I don’t think anyone is born a naturally disciplined person.

So don’t worry if you currently lack discipline. It’s something you can develop with practice, and the more you practice, the better you’ll become at it.

Here are three things you can do to get started:

1. Understand that if you want something different in life, you must do things differently. Write down what you want, then command yourself to do what you know has to be done to get where you want to go.

2. Realize that if you want something different in life, you’re going to have to do things differently. Then, command yourself to do what you know has to be done.

3. Each day, visualize (and feel) a complete shift by holding the image of being successful at what you want to do. Aid your vision in its unfoldment by reviewing your goal (written in the present tense as if you’ve already achieved it) several times a day.

It’s hardly a secret that keeping yourself disciplined as you work toward a goal is critical. But it is the difference between making it or living with regret. What if I had gotten up earlier? What if I had made more sales appointments each day? What if I had studied more?

It won’t be easy to develop and stay disciplined at first. However, you’ll get stronger and stronger. And then you’ll be able to do what you want, instead of just what you think you can do.