The Secret To Saving My Uncle’s Life 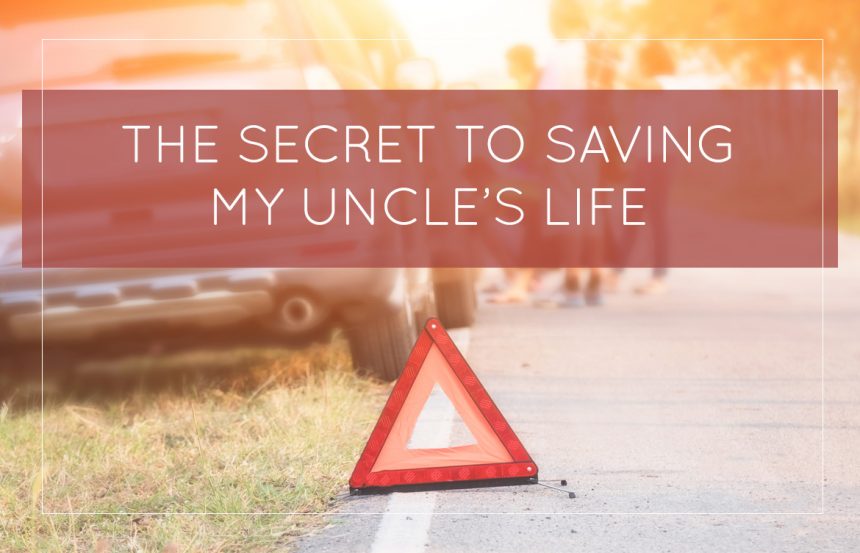 It was Easter in 2007, and my Uncle John and his son Eddie were first to arrive at my house.

He took pastries from the trunk of his car and asked Eddie to take the keys out; little did we all know, the car was still in drive.

As Eddie reached through the window to pull out the keys, the car started rolling back. Within seconds my uncle was run over twice as his car went up then down the hill. Uncle John was pinned underneath his own car.

I rushed to call the police right as my dad and brother tried to relieve the weight of the car from my uncle’s torso so he could breathe and crawl out. No matter what they tried, it wouldn’t budge. My uncle was trapped and coughing up blood.

We knew we were running out of time. We were desperate to save him and feeling increasingly hopeless in the face of a seemingly impossible task. I began to believe that all we could do was wait for help to arrive.

This time my cousin, my brother, my father, and I all made the effort together. We tried a few times and, even though we thought it was impossible, we pushed ourselves even more.

At the point when our bodies should have given out from the strain of the heavy car, a true miracle happened. I have no other words to describe what happened other than the car began to “float” up. Little by little, the car lifted, almost magically. It gave my uncle, who was covered in blood, just enough room to breathe and crawl out from under the car.

The police and ambulance finally arrived. He was airlifted away to a hospital and we were told he probably wouldn’t survive and if he did, he would be severely handicapped for the rest of his life.

Two years later, we were all playing soccer together at Easter.

It’s been almost fifteen years since the incident happened, and I can honestly say it changed my life. Especially now, thinking back on how young and small we all were. My cousin and I were only in eighth grade, and my brother was only in high school!

I keep asking myself, how did the car lift?

I remember praying to God and just pushing with every ounce of strength I had in me. To this day, I’ve never pushed anything that just “lifted” the way that car did on that day.

Faith, perseverance, and love are what saved my uncle that day, and it opened my eyes to just how limitless we are as humans and what God is capable of doing for us. It’s what led me to the limitless belief system I value every day. It gave me the confidence to start my own business. It also reminds me to always double-check to see if the car is in park before taking out the keys, especially when there’s a man taking pastries out of the trunk!

Daniel Russo is a co-founder of PrimeMinds, which is for people who strive to improve their mindset through personal growth that struggle to stay consistent. PrimeMinds is a mindset and personal growth app that provides a fun and organized all-in-one experience that keeps you on track every day. Unlike all of these low-quality and basic mindset apps, they provide you with a customizable personal growth hub that gamifies your journey and is designed with all of the best tools, habits, content, and support.

PrimeMinds is giving you an opportunity to get shares by investing in their company and reserve your spot for the new app version here.