How Thought & Action Created the Movie, “In The Heights” 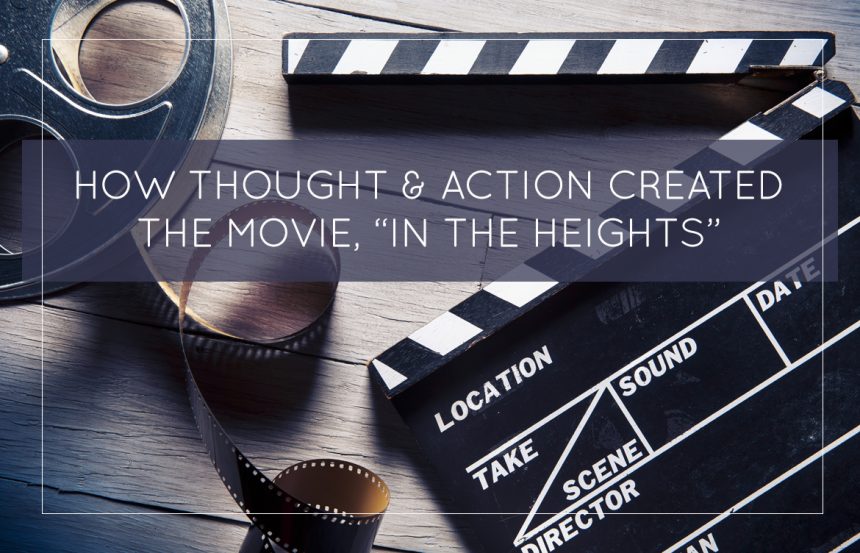 Two weeks ago, the movie adaptation of Lin Manual-Miranda’s blockbuster Broadway musical, In the Heights, debuted in theaters.

The Heights debut is particularly sweet for two reasons:

First, it was supposed to debut in the spring of 2020, but COVID stopped it in its tracks. While this was a giant disappointment, the timing is even better now as we all begin to emerge – exhausted and relieved – from a year that put the brakes on the entire world. This movie’s theme has so much more impact now.

In The Heights is a particular triumph, though, as every aspect of the “look and feel” of the movie features the unfathomably creative mind of Nelson Coates, a dear friend of mine who lives here in Laguna Beach. I feel especially privileged to be in this guy’s world. His is one of the most magnificent talents I’ve ever known. He’s like Willy Wonka, ever and always spinning incredible creations as he accesses nothing more than his “pure imagination.”

After Nelson’s award-winning success as Production Designer of his over-the-top, gilded world of Crazy Rich Asians, that movie’s Director Jon Chu brought Nelson along into his next big project, the movie musical, In The Heights.

How Nelson got there, though, is a tale all its own.

Nelson has created the look and feel of movies across the gamut, from rom-coms such as The Proposal (Sandra Bullock, Ryan Reynolds) to feel good movies such as The Big Miracle (Drew Barrymore, John Krasinski), and to dramas such as Flight (Denzel Washington), Runaway Jury (John Cusack, Gene Hackman, Dustin Hoffman), and most recently, The Morning Show‘s second season.

Nelson scouts for months all over the world before recommending his locations to the Director. He turns monkey-infested grass shacks into palaces. He not only imagined that crazy rich wedding in Crazy Rich Asians but crossed every finger and toe that the water flowing into the scene would work – they hadn’t had time to fully test it before filming.

Nelson’s crew takes over city blocks on his command, and he chooses color and style of anything you see in the frame, directing one set creation after another. He literally races hours ahead of the Director and the film crew, creating worlds that will only exist a few hours in time.

Nelson loves to work out impossibilities. As an example, in the Heights movie, he discovered an ultra-modern brownstone and toiled for days to transform its interior into a grandmother’s homey apartment so that the lead actor (Usnavi) could walk – in one take – from his home to the bodega (corner store) he owned.

Nelson welcomed the added work because he figured that this angle of the lead actor’s walk would better introduce the neighborhood cinematically with a backdrop of the George Washington bridge.

His depth of detail is so intense that it takes multiple viewings of the same movie to try to catch all the many tiny touches and “Easter eggs” that are shout-outs to his closest friends and family.

Acting on his great big dream

In The Heights is undoubtedly Nelson’s greatest achievement to date because it tells the story of how HIS decision brought this opportunity to his door.

Twelve years ago, Nelson was a giant fan of the Heights Broadway musical. When he heard that the theatrical production might be converted into a screenplay, he began to follow that path like a bloodhound dog.

The script was initially purchased by a now-defunct production studio and was subsequently tied up in legal red tape. Once it was freed up, there was a mad rush to purchase the script. It finally landed at Warner Bros., and word circulated that John Chu was in consideration as its director.

For Nelson – a longtime admirer of Jon Chu’s work – this news was like winning the lottery.

Once he knew that Chu was attached to the In The Heights project, Nelson decided to get involved in any and all projects Chu was involved in. By securing a place on Chu’s team, Nelson hoped he could prove himself worthy of the Heights movie, even though he still had no idea when or if it would ever go into production.

Nelson told his agent to get him in front of any hiring entities for any project Chu was working on. And, as he continued to accept high-ranking films, he always kept a space open for the eventual Chu assignment.

No one ever dreamed that Crazy Rich Asians would take flight the way it did, becoming the highest-grossing romantic comedy of the decade. At that point, Chu asked Nelson to be his Production Designer for In The Heights.

There aren’t many people who take action on a big dream, especially when there are a significant number of events seemingly out of your control.

When Nelson made his decision 12 years ago, he wasn’t sure that the Heights movie would even be given the green light to be made, let alone that he would be considered for its production.

He wasn’t sure he would ever secure a working position next to Jon Chu – at the time, he didn’t even know the man.

He had no idea he would find someday himself in Singapore and Kuala Lumpur bringing Crazy Rich Asians to life on the big screen.

But he was willing to take the risk. He believed it would happen somehow, someway. He gave every ounce of energy and creativity to every project he worked on … And he always left space for that day when the call would come for In The Heights.

In The Heights is about never giving up on your dreams. How fitting, then, that Nelson Coates achieved his own dream on the same streets he created … in the Heights.

Your dream is yours for the taking, my friend. Act now.

Diane Armitage is a long-time writer and marketing strategist for Bob Proctor and other industry leaders. Click here for Diane’s video, “10 Things That Millionaires Do Differently,” which includes a coming-soon live interview with Nelson Coates.