Know and Own Your Worth 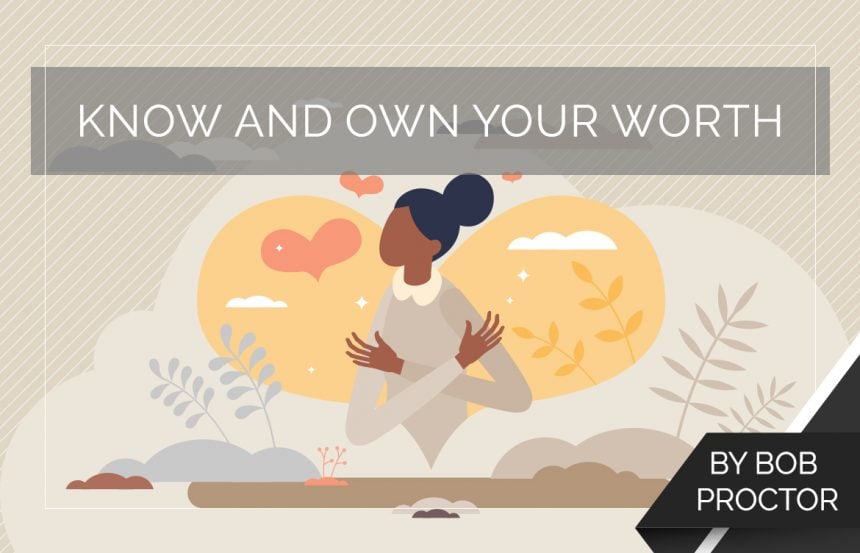 If you knew what you were worth, would you settle for anything less?

It’s not uncommon to feel inadequate, whether it’s issues surrounding your career, relationships, or finances.

But what if you could overcome the unthinkable by realizing your worth isn’t tied to things, experience, or people but to God.

Most religions teach that God is responsible for everything made in this world, and I fully subscribe to this proposition.

However, as co-creators, human beings must bear the responsibility for WHAT God makes in our lives.

The following story, which I share more fully in You Were Born Rich, illustrates this point:

A minister was driving along a remote country road many years ago when he happened upon a beautiful farm. The farm was kept in superb condition.

The fences were well cared for. The crops were a radiant green. And the house had a clean, fresh coat of white paint on it.

The lawns surrounding the house were a deep rich green and manicured as any putting green ever was.

The entire picture was absolutely breathtaking in its splendor.

On the other side of the road, the fields were plowed, and the earth was the deepest black the minister had ever seen, and he was amazed at how the furrows had been plowed in such a way that they stretched out in rows “as straight as clotheslines.”

Far off in the distance, the minister could see the farmer sitting up on his tractor. It appeared that the farmer was moving toward the road as he was plowing.

The minister pulled his car over to the side of the road, got out of it, and walked toward the fence so he could enjoy the light breeze and admire the beauty of the farm.

When the farmer reached where the minister was leaning against the fence, he climbed down from the tractor and slowly walked in the minister’s direction.

As the farmer got closer, the minister smiled, raised his arm, and waved, saying, “My good man, God has certainly blessed you with a beautiful farm.”

The farmer stopped, pulled out an old red and white polka-dot handkerchief from his pocket with his big, scarred, and calloused hands. He raised his arm and wiped the sweat from his sun-scorched brow.

The farmer stood in silence for a moment, looking at the minister, and then he spoke. With a slow, steady voice, he replied, “Yes, Reverend, you’re right. God has blessed me with a beautiful farm, but I just wish you could have seen it when he had it all to himself!”

Your future can be anything you want

No matter what your past looks like, it doesn’t have to be your future.

You are using the mental faculties that everyone has. They are the same faculties used by Steve Jobs, Buddha, and Oprah Winfrey.

You might have formed the habit of thinking that people like the ones I just mentioned are different than you and me. But I want you to know the only difference between you and them, or anyone else is only in appearance and accomplishments.

The farmer used his facilities to create a picture-perfect farm. While we all live in different physical bodies and use our inherent mental faculties differently, our basic structure is fundamentally the same.

I am well aware that many scholars and professionals will tell you that thinking you are capable of wealth, loving relationships, and creating a successful career doing work that you love is a lot of nonsense.

But disbelievers have always existed, and they are, in my opinion, little people. For all of the genuinely great leaders are in complete agreement with what I have just explained about your equality with great people of the past and present.

Even Jesus tried to tell the world, as he was doing his great work some two thousand years ago, that you too were capable of doing what he was doing. In fact, He even went one step further in saying, “Even greater things are you capable of.”

Believe him. He spoke the truth.

Despite what Jesus said and what others have said about your capabilities, it still may be difficult for you to believe you are worthy of anything you want to be, do, or have.

What can you use to base your worth on?

You can get started by defining your value. Ask yourself:

Make sure your answers don’t have anything to do with external situations or how others view you.

By now, I hope you’re leaning into the idea that no one else or external circumstances determine your worth.

Build on the answers you came up with in the previous exercise by using your mental faculties to create a beautiful image of the kind of life you would love to lead.

What do you really want? What kind of relationships do you want? How much money do you want to earn?

Like the farmer who turned the raw land that God blessed him with into a beautiful farm that would fit nicely on a postcard, create an image of a life that is absolutely breathtaking in its splendor. You are worth it.

Get the “You Were Born Worthy” download and follow the steps it outlines to create a self-image that makes the most out of what God brings into your life.

Know Your Worth Self-Image