See It. Believe It. Achieve It. 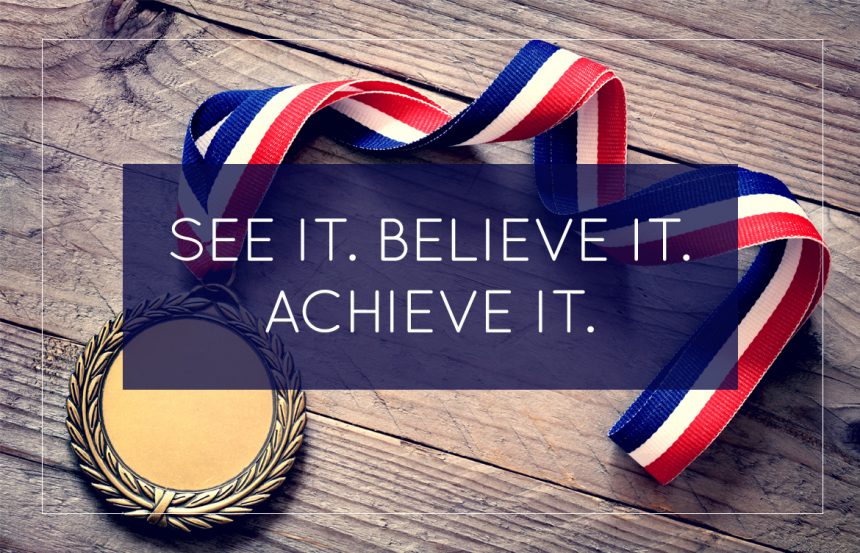 A journey of a thousand miles begins with the first step.

Or, in my case, the journey to an Olympic gold medal began with the first pedal stroke on a bicycle.

For as long as I can remember I had always ridden a bicycle—fast. I won a lot of races against the kids on my street, but never imagined that once I joined cycling’s big leagues, it was going to take almost 18 years of training and racing to achieve my dream of winning an Olympic gold medal.

Let me share a secret I’ve learned, one powerful act that helped my journey, and could help you to work with a laser focus to reach your wildest dream.

You have to see it—the end of your journey—when you start.

And, it’s the first part of my mantra: “See It. Believe It. Achieve It.”

It’s the message I share whenever I’m speaking with school kids and organizations of how to transform your dream into a goal and then make it a reality.

“See it” is about getting a crystal clear picture in your mind of your goal. “Believe it” is when you believe 100% that you can do “that something”. “Achieve it” is the result.

Let me tell you about seeing my dream. At first, growing up in Toronto, the bicycle meant freedom. Freedom of exploring new places, going farther and faster than before.

And then there was the teenaged need for speed.

The local bus became my quarry. I’d chase the diesel spewing monster to see if I could beat it to the end of the line (a 12-minute bus ride). Hey, why do it once? After two or three round trips I’d be wheezing, coughing, and gasping for air, but I had an absolute blast on these missions!

So far, so good. But unfocussed. Until.

During the 1984 L.A. Olympics I saw Canadian Steve Bauer sprinting for Olympic road race cycling gold against American Alexi Grewal. During the TV commercial break there was an ad telling the story of a farm-boy cyclist whose father did the boy’s chores so that the aspiring athlete could train for the Games. Bauer’s performance and the fictional farm boy’s dream was indelibly burnt into my mind.

I was inspired, and left the great bus chase behind. Fleeter quarry was required.

I began to pace cars on flat stretches of road, trying to maintain at least 25mph (40kmph).

But it wasn’t enough. The fire lit by the ’84 Olympics road race wouldn’t be put out.

I craved something more. By that point I had decided to represent Canada at the Olympics. I didn’t have a clue in the world what was involved. I was working full time as a legal secretary and assumed that I’d just have to ride my bike a lot before, and after, my shift. No problem!

I was improving my vision, but let’s just say that I could have used stronger glasses.

At least I saw that I needed to upgrade my equipment from a 44-pound mountain bike to a light-weight racing bicycle. Armed with this insight, I went into the TD Bank and requested a loan for a thousand dollar bicycle to officially begin my Olympic journey.

It seems naïve, but I had faith in the Loan’s Officer. I told her about my Olympic goal, that I could be a champion, and I knew that I could accomplish this. All I needed was a loan.

Time stood still as I waited for the verdict… and then it came. Belief is contagious, and the loan was approved! I felt like I had already won the Olympic Games. Little did I realize that I had an awful lot more to learn.

There is no machine designed for human enjoyment that can inflict more pain than a bicycle.

I soon found out that competitive cycling is all about suffering and speed. Its contradictions include riders seeking fulfilment through mind-bursting and soul-roasting difficulty. This meant that racing my bicycle was more than just pushing my physical limits. It meant that I also had to deal with and conquer my mental doubts and fears and that inside voice that said, “there’s no way you’ll be able to pull this off”.

I was fast, but still raw, unskilled and unfocussed.

Still, if you try, allies will appear.

And sure enough, one did. The National Track Cycling Coach had noticed me and my raw energy. He wisely decided to suggest track cycling—sprinting at nearly 50mph on a banked oval riding a bike that had one gear and no brakes.

I was hooked right from the first ride.

To me fast things are fun things, slow things are boring. Boredom is the enemy. Of course, like all love affairs, there is a cost. Speed is your friend until you crash.

Yes, I won many National titles, International races, and World Championship medals, but there were a lot of injuries and tough breaks.

Broken collarbone, tendonitis in both knees, falling 20 feet side off a cliff while mountain biking, and even blowing up —quite literally, with a ruptured appendix before the World Championships.

Now I can see that each one was a chance to slow down, to re-evaluate what had broken.

On more than one occasion I asked myself, “Aren’t you done yet?” The answer was always the same, “Nope.” And next, “alright, now what are you going to do?” Back to the drawing board I went. Back to re-building. Back to the basics, the fundamentals.

It was only when I looked back that I could connect the dots and their cryptic messages. Easy now to see what I was missing.

Not so obvious back then. The successes tantalized me, but I still was not any closer to achieving my goal. So I gambled. I moved half way across the world to train under a World and Olympic cycling champion now turned coach.

Having faith is a pre-requisite. Having blind faith is a really dumb idea.

Looking back, I should have asked more questions and done a lot more research about the training and racing program I was about to embark on. I was so filled with blind faith, so desperate for an instant fix, that I never even spoke to the coach—I just signed up!

And paid the price. Like a roulette player who bet everything on Red 27, I lost it all for an entire season. I was under-coached and over-trained. Exhaustion and injuries added up to the slowest racing times in my entire cycling career.

Disillusioned, and without a focus I filled the rest of the summer with parties and music concerts, occasionally interrupted by half-hearted training.

It should have been fun, it should have soothed my tormented soul, but it was torture. I was unchallenged, unhappy, and bored. But the good news is, if you are bored you can change things in an instant.

Looking back, I realized that all of my starts and stops were due to a lack of confidence and belief in myself. I lacked the belief that I could do this, that I could actually pull this off, and win.

You have to believe it, no matter how bad things look.

And you have to see it. You need to see the ending you want, and to commit to it.

That fall, on a bleak night, sitting on a worn out sofa in the local cycling clubhouse, I put it all on the line, starting with a new belief, a renewed vision.

I wrote on a yellow sheet of paper: “Win Olympic gold.”

With the odds totally against me, I made the decision then and there to win an Olympic gold medal. I had had enough and I was going to take matters into my own hands. I was going to do whatever it legally took to focus on pursuing my goal and believing in myself. As soon as I had made the decision, the weight completely lifted off my shoulders.

Not only could I see it, but I believed it. All I had to do, was achieve it.

It’s strange, but that was the easier part.

That night at training I told my coach what I was going to do and enlisted his help to make it happen. I knew that I couldn’t do it all by myself. We all need to check in with someone, get a reality check, some guidance, and feedback.

We all need help, and sometimes, you just need to talk to someone.

It didn’t seem like such an important night, at the time. But I had seen it, believed it.

I had an Olympic gold medal around my neck, and was voted as Canada’s sportswoman of the year.

But more important, I know what it takes, and how to help you get there too.

Don’t be afraid to dream, to dream big. Even if you’re not sure? What do you have to lose?

Borrow my motto, my mantra, “See It. Believe It. Achieve It.” and make it yours. Start your journey with the end in mind, and you’ll never lose your way.

You only need to prove to one person that you can do it. And that’s yourself. I believe you are here to do something great, something magnificent. Share what you love to do! The world needs more of YOU. We are all watching and cheering you on.

Lori-Ann Muenzer
—
Lori-Ann Muenzer won Canada’s first and only Olympic cycling gold medal at the age of 38, while working full-time, on borrowed wheels, and competing against competitors half her age at the 2004 Athens, Greece Olympics.

She is a Proctor Gallagher Certified Consultant facilitating and empowering people to Think Into Results like an Olympic gold medalist but in their profession.

Lori-Ann is also a highly sought after Speaker, and Best Selling Author of One Gear No Breaks (www.OneGearNoBreaks.com).