What’s Most Important to Your Success—Mindset or Strategy? 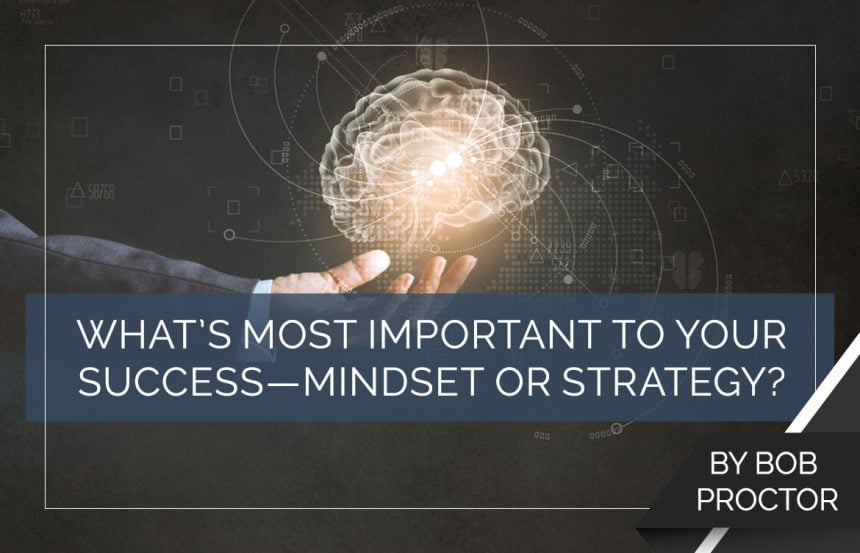 I have traveled all over the world helping people alter the course of their life.

This accounts for why ordinary people often achieve extraordinary success, and brilliant people can struggle to make things happen.

You could be the smartest person in town and have a solid strategy for reaching a goal; however, if you have the wrong mindset, not much is going to happen.

An Attitude of Average

We are creatures of habit.

You’ll see this manifest in simple ways, such as the type and number of restaurants we frequent, or as complex as the companion we choose.

We often decide to change our patterns, only to find ourselves sliding back into them shortly afterward.

Real change requires strong and continued commitment. There is an undisputed link between commitment and reward.

Big goals demand big effort. If the effort is average, then your reward will be too.

However, some find big goals intimidating for that very reason—they demand big effort.

Most of us carry around an Attitude of Average.

We view our lifestyle as being within a range of what’s comfortable and comparable to our friends, neighbors, parents, and siblings. But what it really means is that we’re limiting ourselves by comparing ourselves to others.

We create within our mind an idea of what’s obtainable rather than what’s possible. So, when we set goals, we start out deciding what we know we can do or get and then take steps to achieve that limited goal.

A good example would be if you look at your bank account and income statements of what you eared last year. That represents what you know can earn. Then, you might decide to stretch a little, say 5 -10 percent, to what you think you can earn and set your goal there.

The problem isn’t that you can’t meet that goal—you can! And that’s the problem—the goal is too limited to begin with.

Instead of contemplating what you really want, you force yourself into a series of small steps to reach what you think you can achieve. Since these are small goals, they require small effort and don’t really more you forward.

So how do you break that habit?

How do you create a mindset that alters the course of your life?

R. Buckminster Fuller said, “You never change things by fighting the existing reality. To change something, build a new model that makes the existing model obsolete.”

If you’re not trying something right now that you have no idea how to achieve, it’s time to create a new model.

Instead of making incremental improvements, take a totally new approach by conducting a big and bold experiment.

Conducting an experiment can change your mindset because it’s not based on what you’ve done before. It’s trying something NEW, where the boundaries of what’s possible have been expanded.

Here’s a process for developing an experiment that can help you build a new model:

• Think about a goal that would really excite you. In other words, what is something that would be motivating, fascinating, and stimulating to attempt. Think about how you would feel if you reached your goal.

• Set a three-month timeline. The pressure of a timeline will create flow, deep creativity, and a sense of urgency.

• Focus on who, not how—think about who you could collaborate with to help you reach or exceed your goal. Who could help you fast-track your results? Who could you involve that would take this experiment beyond where you’ve currently imagined it?

Look for people who push you past your limited ways of thinking. Moreover, trying to do everything by yourself often leads to procrastination and failure.

• Do something that moves you closer every day. Every night during your experiment, list one to three things you will do the next day to move you closer to your goal.

If you don’t have it on your calendar, it won’t get done. If it’s on your calendar and you put first-things-first, you’ll be stunned by how much you get done in a single day.

A train creates a tremendous amount of momentum to keep moving along the same track. It takes an unusual or unexpected force to redirect that train. That’s why, without change in some form, we are likely to simply continue on the same path.

There have been times in your life when you decided to make a change.

Even though, you feel committed to it, six weeks later, you realize that you have let the idea slip away and have fallen back into your old habits.

Because our paradigms and old beliefs are so ingrained , deciding we want to change often isn’t enough. While it may not be completely natural at first, anyone can begin to create a success or growth-oriented mindset and live a meaningful and fulfilling life by taking consistent action.

While you may think the experiment that I’ve written about is a good idea, research shows there’s only a 10 percent chance that you’ll make a change. However, if you set a specific time to share your progress with someone else, you have a 95 percent chance of change.

This illustrates how powerful it is to be accountable to someone. Accountability greatly increases your chances of doing what you say you are going to do.

That’s why it is so helpful to work with a coach or mentor. They’ll hold you to your word and ask hard questions if you aren’t measuring up to your own expectations.

If you can’t work with a coach, I encourage you to seek out the support of a Mastermind Group. This is a group of individuals who have similar goals. Sharing your progress and getting support from a Mastermind Group can mean the difference between you succeeding or having setback after setback.

The idea of getting a coach or joining a Mastermind Group may be a real departure. But often a departure is necessary to really move you forward.

If you could become a millionaire all on your own, you’d already be one. Getting help in changing your mindset can be the best avenue to improving every area of your life.