The Illusion of Impossible 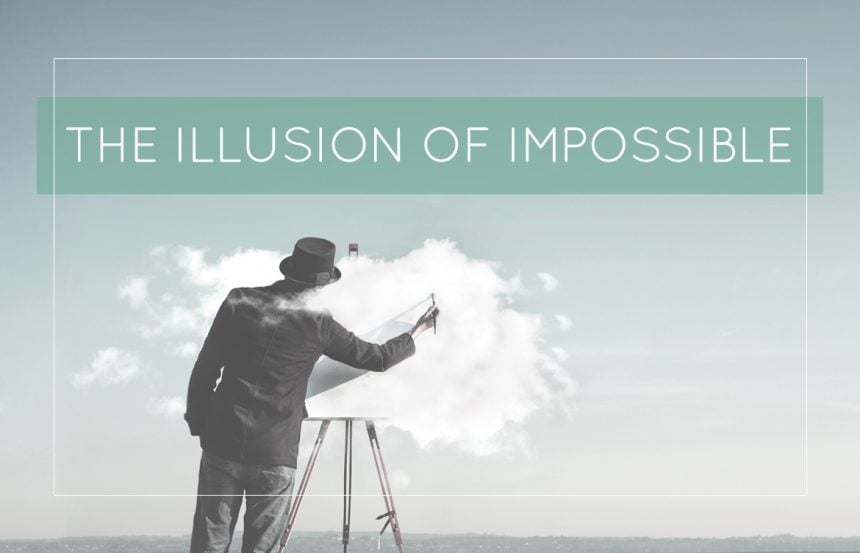 “Predicting the lottery numbers? You know that’s Impossible”. “Yes, Sir, that is why I would like to do it!”

For years, I used other people’s reactions to gauge whether or not my ideas for illusions were worthy in size and scope to pursue. The more I was told it was “Impossible,” the bigger the urge I had to prove that it could be done. After performing magic and illusions for decades, what would be more impossible than predicting the lottery numbers on live TV? After all, that is what illusionists do, right? Making the impossible seem possible, or at least attempting to do so, while unfortunately often ending up deceiving themselves in the process, as I did.

Why is it that as kids, nothing is impossible for us, invisible friends, superpowers, and Santa, who is real… Time passes, and slowly but surely, the “magic” dissipates – and what is taking over is a rational, logical approach to everything. Only letting ourselves guide by what we can see, hear, smell, taste, and touch, disregarding most everything else, dismissing it as “impossible,” illogical, or out of reach.

As an illusionist, my biggest task was to work backward from uncommon feats, out of the ordinary scenarios, and yes; Impossibilities. Live on the air in Denmark, in a televised 2-day special, my former business partner and I accurately predicted all seven lottery numbers. Our proud excitement was met with one single phone call the following day. A nice lady requested us to perform for her son’s 5th birthday party, preferably with balloon animals… I remember thinking that either I wasn’t doing the right thing or was in the wrong place. I concluded the latter, and with a day’s notice, left my native country of Denmark. In that move, I lost my friends, business, and my father, who passed away, and I was sitting in Miami having nothing but two suitcases with me and a deck of cards and felt I had lost everything.

A friend gifted me the book “The Power of Your Subconscious Mind,” and as I started reading it, everything in my life started to change those 13 yrs ago.

When you no longer associate yourself with much in your physical world, you are forced to look in a new direction; Inward. I realized that what I had lost were the illusions, the false associations to people, things, and circumstances. What is real cannot be lost; only the false associations can. What is truly real and everlasting is our ability to create from within – that never goes away!

I went from performing magic mostly for tips in local cafes and restaurants on Miami Beach to producing and performing production shows on television and cruise ships worldwide in less than one year… I knew it had something to do with this book, but I couldn’t articulate HOW it happened. I became fascinated with the material, and have never stopped studying – things kept getting better!

After concluding my last illusion show about 8 yrs ago, I looked myself in the mirror in the dressing room – I knew it was time to stop. Personal development, goals, quantum physics, the mind; It fascinated me SO much more than getting audiences to ask themselves, “how did he do the trick.” In the same vein as when I left Denmark, I stopped right then and there, as my new path was more apparent than ever; combining personal transformation and magic, which is what I do today.

What I’ve found is that Impossible is merely an opinion; it is a mental label that you and I assign to things outside of our normal realm of thinking. The word itself says I ‘m-Possible, so aren’t infinite possibilities already here at all times? They are just merely waiting for you and me to name and claim them.

It’s a strange dichotomy this business of illusions… You want to know how the trick works; yet you simultaneously want to remain in the mystery. As Albert Einstein said; The most beautiful experience we can have is the mysterious. I believe that’s true because when you know how the magic works, it’s not magic anymore, it is reduced to simple mechanics.

However, when you understand life, the laws of your mind, and how to create from within, that is truly Real Magic, and we all hold the key.

To your “Impossible” goal…

Anders Hansen bridges two decades of experience as an internationally acclaimed illusionist with the best of personal transformation in an experience never before seen.

Join Anders in a free training in which he shares with you how you can overcome the Illusion of Impossible in your life and learn how to make an object appear and levitate in mid-air in a cool illusion that you can share with friends and family. Learn the illusion, receive the training, and an invite to join his team on a 1:1 call to overcome the illusions standing in your way. Click here: www.AndersHansen.com/Insights