Thinking in the Certain Way 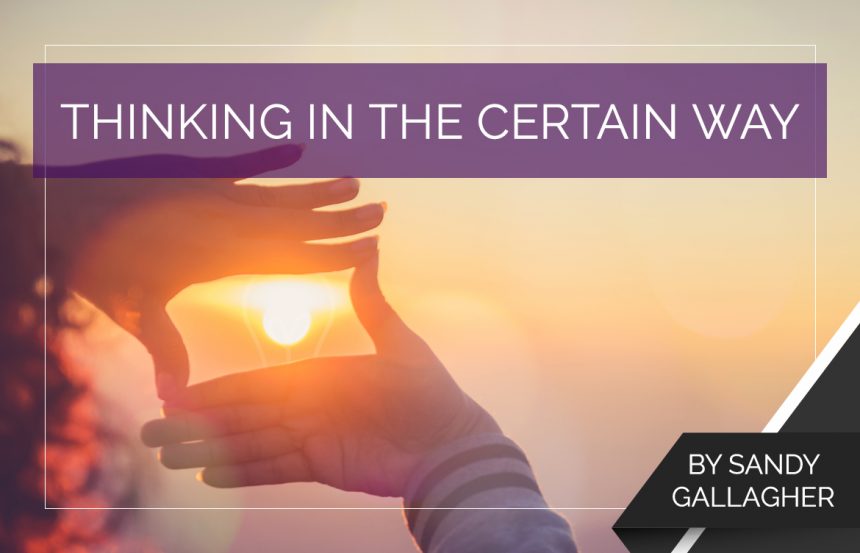 In The Science of Getting Rich, Wallace Wattles says that the first step in getting rich is forming a clear and definite mental picture of what you want.

Unfortunately, many people fail to do that because they have only a vague and misty concept of the things they want to do, to have, or to become.

You see, having a general desire for a nice house or wealth “to do good with” is not enough. Everybody wants those things. If you transmit an idea that is vague and formless to the universe, you’ll get nebulous results.

Here’s how Wallace Wattles put it:

“If you were going to send a wireless message to a friend, you would not send the letters of the alphabet in their order, and then let him construct the message for himself. Nor would you take words at random from the dictionary. You would send a coherent sentence, one which meant something.

“When you try to impress your wants upon the thinking substance, remember that it must be done by a coherent statement. You must know what you want, and be definite.

“You can never get rich, or start the creative power into action, by sending out unformed longings and vague desires.”

However, when you use your imagination to picture what you want precisely, and then use your will to focus on that image, you are in tune with Infinite Intelligence. The conscious use of this high power in this way attracts resources to you from near and far.

I learned the hard way

Many years ago, I thought it would be incredible to live in Malibu in a house beside the ocean.

It was a nice idea, but I didn’t create a picture of exactly what I wanted.

The good news is I found a place in Malibu beside the ocean.

The bad news is it was a tiny condo with ceilings that were barely taller than I am. I had to get small furniture, and the windows were always dirty from the salty air. And the water would often pound underneath the floor.

It was far from the incredible experience I had hoped for.

That was Strike 1 in my efforts to get the home of my dreams.

I quickly figured out what had gone wrong. I had not been specific enough about what I wanted. So, I started working on creating a clearer picture in my mind.

I ended up finding a house where I didn’t have to worry about water hitting underneath the floor, dirty windows, or cramped space. The house was sitting near a big cliff above a canyon.

Well, living so close to a cliff ended up creating a huge problem for me because I have dogs. Every time I let my dogs out, I was terrified that they were going to fall off the cliff.

So, the canyon house was Strike 2. I still hadn’t created a clear enough mental picture of the home I wanted.

While I was living in the canyon, always afraid that I’d lose one or more of my dogs, I created yet another image of the home I wanted.

But this time, I practiced examining every detail of the picture.

I got an idea of a beautiful one-story home on the water. It was large enough for me to be able to live and work comfortably. It even had extra space for visitors. It also had plenty of room for the dogs. I also pictured it being peaceful without being too remote.

One day, I was visiting a friend on Whidbey Island. On a whim, I googled “luxury waterfront homes Whidbey Island,” and the third listing caught my eye.

I watched the virtual tour, and I felt like the house was made for me. It was just like the image I had been holding in my mind.

I made an appointment to see the house, and I fell in love with it immediately. Then, I looked at the asking price, and it was a lot more money than I wanted to spend on myself.

Thankfully, Bob kept urging me to get it, so I went back to see the house a couple more times. I fell more in love with it each time I saw it.

So, I bought it, and I love it just as much today as I did then.

It works for everyone

Wallace Wattles shares a story in The Science of Getting Rich about a poor man who was told. to improve his life, he would have to create a clear picture in his mind of the things he desired. And that he would have dwell on that picture as often as possible so it might be impressed on his subconscious mind.

The man was living in a rented house, and he only had what he earned from day to day. He could not grasp the fact that he could be wealthy.

So, after thinking the matter over, he decided it would be reasonable to ask for a new rug for the floor of his best room and an anthracite coal stove to heat the house during the cold weather.

By holding that picture in his mind, the man obtained the rug and stove in a few months. And then it dawned on him that he had not asked for enough. So, he went through the house he was renting and planned all the improvements he would like to make.

He went through the house, adding a bay window here, a room there, and new furnishings throughout until all the details were complete in his mind as his ideal home.

Holding the whole picture in his mind, he began thinking in the Certain Way and moving toward what he wanted. He was able to buy the house and rebuild it into the form of his mental image.

And then, with greater faith, he went on to picture greater things. And, as it can be with all of us, he got everything he wanted, according to his faith.

Getting anything you want

Thinking in the Certain Way begins by deciding what you want and then creating a clear mental picture of it. Then, you must keep that image in mind continually, as the sailor has in mind the port toward which he is sailing the ship.

It’s not necessary to do concentration exercises or set aside special times for prayer, affirmation, or meditation. All you need is to know what you want and to want it so badly that it will stay in your thoughts.

However, according to Wallace Wattles, you also need to do two more things. First, behind your clear vision, you must have a purpose—a reason why—to bring it to physical expression.

And second, you must have unwavering FAITH that the thing is already yours; that it is “at hand,” and you have only to take possession of it.

Live in the new house, mentally, until it takes form around you physically. In the mental realm, run the successful business you dream of, live in a healthy body, and enjoy financial freedom. Enter at once into full enjoyment of the things you want.

If you train yourself to think and behave this way, I promise the payoff will be huge.