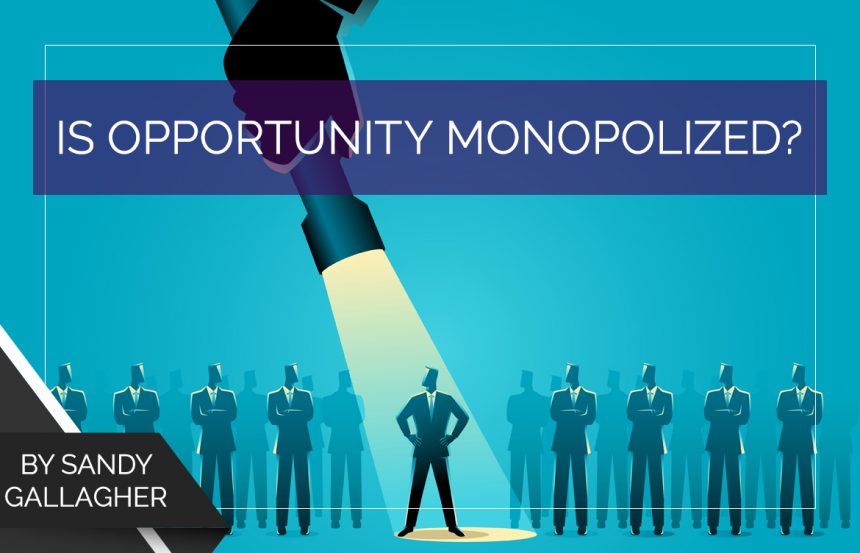 A couple of weeks ago, Bob live streamed a Q&A session called “What a Wonderful World.”

People all over the world watched as Bob reminded us that if we use the infinite power that flows through each one of us in a certain way, we can create any life we want.

And, in this article, Wallace D. Wattles reminds us of the same thing. He shows us that opportunity is not monopolized by a group(s) of people; it is available to each and every one of us—no matter who we are or what our circumstances may be.

In addition to Wattles’ words on this topic, which were published in 1910, I share my observations from the present-day perspective.

As you’ll see, while the trappings of the physical world change over time, the truth underlying the ideas that Wattles’ shared (shown in italics below) is timeless.

No person is kept poor because opportunity has been taken away from him—because other people have monopolized the wealth and have put a fence around it. You may decide not to engage in certain kinds of business, but there are other channels open to you.

Some market sectors are, as Wallace Wattles put it, pretty well fenced off. Think Microsoft, Google, and even cable providers. However, there are countless opportunities in other areas where you can do exceptionally well.

Today, among other things, data protection products and services, home delivery of delicious, healthy food, and providing green options to customers are in high demand.

And, with things changing so fast in today’s world, demands for new products and services emerge every day. There are limitless opportunities for anyone who is willing to keep their eyes and their imagination open for new and improved ways of doing things.

It is quite true that if you are an employee of a large company, you have little chance of becoming the owner of the company.

However, it is also true that if you will start to act in a certain way, you can soon leave the employ of the company and start a business that not only lights you up but also provides a highly desirable product or service to others.

At different periods, the tide of opportunity moves in different directions, according to the needs of the whole and to the particular stage of social evolution which has been reached.

At present, among other things, opportunities are available for mobile commerce and no-touch alternate payment options, faster delivery options, and personal hygiene products and protective equipment.

There is an abundance of opportunity for the man or woman who will go with the tide, instead of trying to swim against it.

Office workers, either as individuals or as a group, are not deprived of opportunity. The workers are not being kept down by their masters—by the powers of big business and the conglomerates. As a group, they are where they are because they do not do things in a certain way.

People are where they are because they are not aware of how to go somewhere else, somewhere they’d really love to be. Because of their paradigms, they keep doing things the way they’ve always done them and following the masses, instead of walking their own path.

When it begins to do things in a certain way, the working class can become the master class. The law of wealth is the same for them as it is for all other groups. Workers will remain where they are as long as they continue to do as they do. The individual worker, however, is not held down by the ignorance or the mental slothfulness of his class; he can follow the tide of opportunity to riches. This book will tell him how.

No one is kept in poverty by a shortness in the supply of riches. There is more than enough for all. A palace as large as the capitol at Washington might be built for every family on earth from the building material in the United States alone. Under intensive cultivation, this country would produce wool, cotton, linen, and silk enough to cloth each person in the world. The visible supply is practically inexhaustible; and the invisible supply really is inexhaustible.

Everything you see on earth is made from one original substance, out of which all things proceed. New forms are constantly being made, and older ones are dissolving; but all are shapes assumed by one thing.

There is no limit to the supply of formless stuff, or original substance. The universe is made out of it, but it was not all used in making the universe. The spaces in, through, and between the forms of the visible universe are permeated and filled with the original substance—with the formless Stuff, with the raw material of all things. Ten thousand universes can still be made, and even then, the supply of universal raw material will not be exhausted.

No person, therefore, is poor because nature is poor, or because there is not enough to go around.

Nature is an inexhaustible storehouse of riches. The supply will never run short. Original substance is alive with creative energy and is constantly producing more forms.

When the supply of building material is exhausted, more will be produced. When the soil is exhausted so that food stuffs and materials for clothing will no longer grow upon it, it will be renewed or more soil will be made. When all the gold and silver has been dug from the earth—if man is still in such a stage of social development as to need gold and silver—more will be produced from the Formless. The formless stuff responds to the needs of humans; it will not let them be without any good thing.

This is true of man collectively. The race as a whole is always abundantly rich. If individuals are poor, it is because they do not follow the certain way of doing things which makes the individual man rich.

The formless stuff is intelligent; it is material which thinks. It is alive and is always impelled toward more life.

It is the natural and inherent impulse of life to seek to live more. It is the nature of intelligence to enlarge itself and the quality of consciousness to seek to extend its boundaries and find fuller expression. The universe of forms has been made by formless living substance, throwing itself into form in order to express itself more fully.

The universe is a great living presence, always moving inherently toward more life and fuller functioning.

Nature is formed for the advancement of life; its impelling motive is the increase of life. For this reason, everything which can possibly minister to life is bountifully provided. There can be no lack unless God is to contradict himself and nullify his own works.

You are not kept poor by a shortness in the supply of riches. I shall demonstrate a little farther on that even the resources of the formless supply are at the command of the man or woman who will act and think in a certain way.

All the abundance in the universe is available to all of us through one formless substance—thought energy. By the thoughts we choose to think, you and I decide what level of riches to bring into our lives and the lives of others.

Today, start to replace thoughts of scarcity and inopportunity with thoughts of wonder and possibility. One idea can change your life forever. Right now, even though people are spending more time at home, giant companies are being created in at kitchen tables and basements.