The Definition of YOU 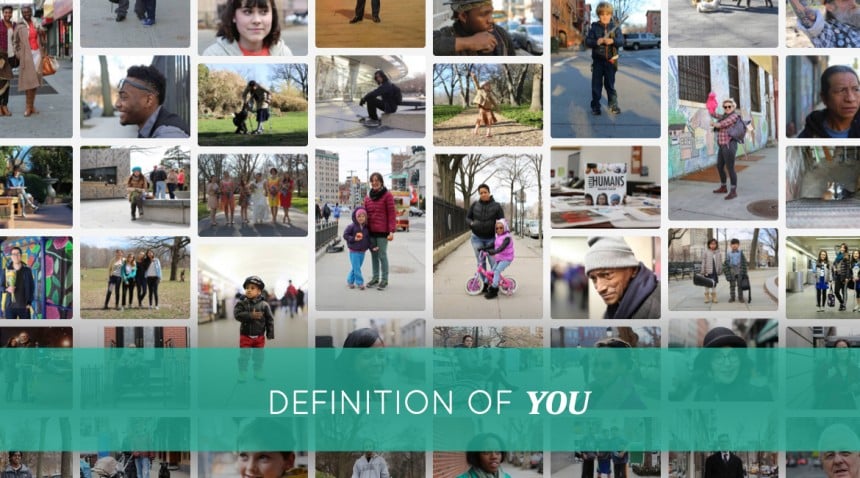 One of my favorite stops on my travels around the Internet is the website Humans of New York.

This site is the dream-made-manifest of Brandon Stanton, a bond trader turned street photographer who spends his days wandering around New York City, snapping pictures of people he comes across, spending a few moments chatting with them and hearing their stories, then (with their permission), posting those images and stories on his site. The posts are often funny, sometimes poignant, and always thought-provoking.

By sharing his dream with the world, this young man has tapped into something powerful and resonant. The site’s companion Facebook page has drawn over 4.5 million (and counting) followers in just a few short years. He has developed a passionate global fan base, among whom he has inspired some incredible and transformational acts of generosity. He’s been profiled on national news programs and in major magazines. The enormous popularity of his site even landed him a book deal, and the resulting volume shot to the #1 spot on the New York Times bestseller almost the moment it came out.

Recently, one of Brandon’s posts struck me as particularly inspiring and profound —something with a lesson for everyone.

It consisted of a picture of a lovely young woman, with this quote beneath it: “For the longest time, I was so focused on being deaf in my left ear, that I almost forgot my other ear was perfectly fine.”

My first thought when I read this was of the tremendous sense of relief and freedom this woman must have experienced, when this realization really clicked for her.

What a moment that must have been. And what a better, happier, richer life she must living now.

What do you define yourself by: what you lack, or what you HAVE? Practicing gratitude is one way, the best way, to begin shifting your focus from the former to the latter. As the response to Brandon Stanton’s work demonstrates, opening your mind and heart to other people’s a-ha experiences is another.

Define yourself by what you HAVE, not what you lack! http://bit.ly/1n9YbOe #abundance #gratitude #bobproctor

Remember, there’s no shortage of abundance in the universe, including in your personal corner of it. Choose to focus on its opposite, and you’ll never see it. Choose to find it, and not only will you; you’ll also realize that it far eclipses any “deficiencies” you had previously dwelt upon. So much so that it erases them altogether.

And YES, both of these actions is a CHOICE. Something you have conscious control over!

If you’re interested, you can check out Humans of New York and learn more amazing Brandon Stanton’s story — itself an amazing inspiration — right here.