The Meaning of Demand 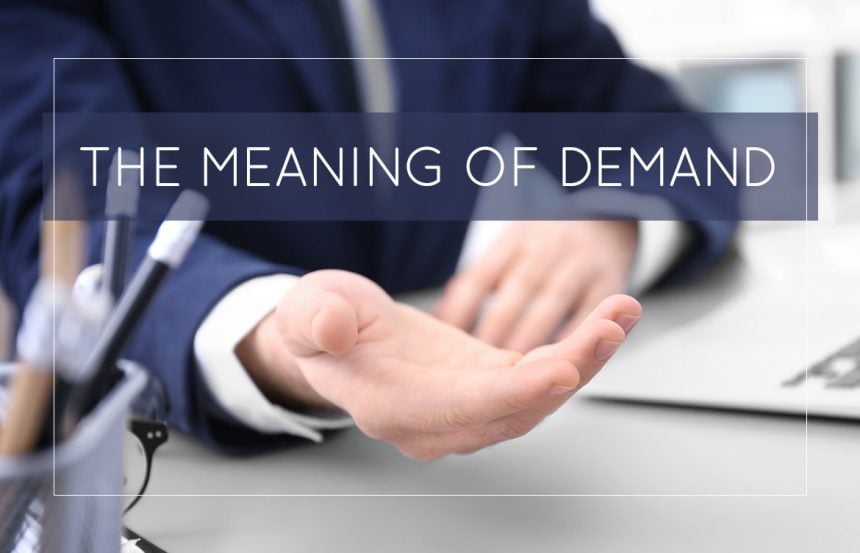 You can have, do, or be anything you want within the laws of nature. Hearing that may seem outrageous, but it’s true.

Many of the accomplished people in the world have applied what you are about to discover in this short e-mail. They created extraordinary results and live completely fulfilling, abundant and rewarding lives. You can do it too!

All you have to do is know what you want and, demand it in a certain way … and demand more of yourself.

“Isn’t it offensive, bold, or even rude, to demand something?” you may ask. Many people recoil at the very thought of demanding what they want out of life.

A reaction like this only occurs because you may not understand what the meaning of demand is in the context that I prescribe. Let me explain.

According to the dictionary, the definition is:

de· mand: /dəˈmand/, (noun) –
an insistent and peremptory request made as if by right.

DEMAND is such a misunderstood word. It is a request in which you ask for what you want, knowing the outcome you desire will happen without question or further discussion… As if it is already done. There’s nothing outrageous about that.

I call this “The Demand Principle”.

At this point you may be asking, “How can I use the Demand Principle to make my desire real?” The answer is simple …demand it! But like everything, there is a process you must follow.

When Napoleon Hill completed his book, he knew the publisher wanted him to come up with a winning title that would send copies of his book flying off the shelves. Every day, he wrote out every title that came to his mind, and every day, the publisher called to hear the latest additions to his list.

None of the more than 500 titles that Napoleon had listed were “right”.

One day, the publisher called to say that he needed the title by the following day, or the book would be called, “Use Your Noodle and Get The Boodle.”

“No!…” Napoleon responded, “You will ruin me if you use that title!” The publisher stood firm, telling him he had until the next day to come up with the perfect title.

“You and I have gone a long way together. You’ve done a lot of things for me—and some things to me. But I’ve got to have a million-dollar title, and I’ve got to have it tonight! Do you understand me?”

His ranting grew to such a noise that his upstairs neighbor started banging a broom handle against Napoleon’s ceiling telling him to quiet down.

Shortly thereafter, Napoleon went to bed, having been satisfied that he’d infused sufficient emotion into his demand that his subconscious mind had received the message.

Around two o’clock in the morning, the author shot bolt upright and jumped out of bed to write down the title that his subconscious mind had delivered, right on time.

Quickly, he phoned the publisher, who answered in a sleepy voice, “You’ve got some nerve calling me in the middle of the night.”

“I’ve got it!” Napoleon Hill enthusiastically shouted through the phone. “The million-dollar title is ‘Think And Grow Rich!’”

The Publisher loved the new title and they released his book that went on to sell several million copies.

Remember, we live in an abundant universe and everything is available to you — in the same way it was available to Napoleon Hill — if you’re willing to demand it.

Demand is not about fighting against the grain, nor is it about force. Force negates.

Demand is about perfect, natural, even super-natural alignment with your desire, every moment of every day.

Peggy McColl is a New York Times Best-Selling Author who is known as “The Manifestation Mentor”. She just released her 18th book, The Demand Principle: Your Invisible Guide To Easily Manifest Anything. Click here to learn more and redeem her special limited-time book launch bonuses