7 Strategies for Women to Become Their Own Boss 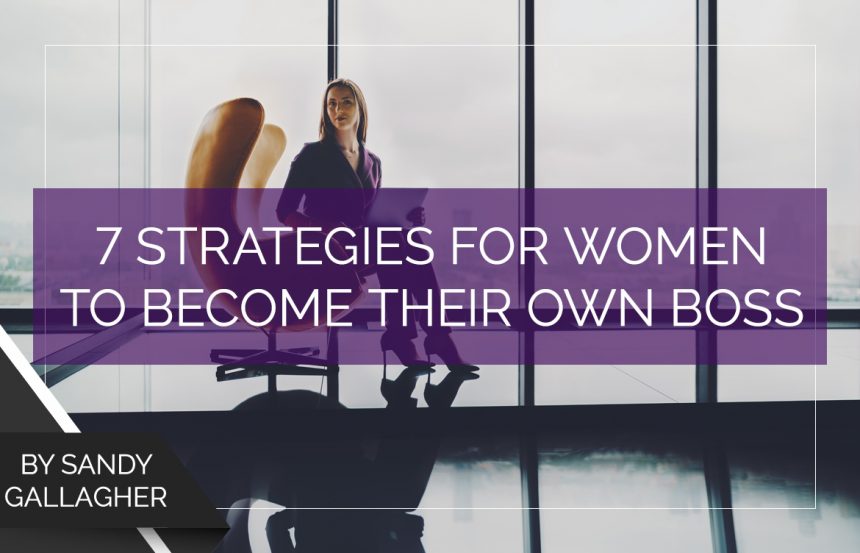 If you’re a woman who wants to be your own boss, this post is for you.

(And if you’re a man who wants to start or run a company, what I’m about to share will work equally well for you.)

As someone who has been running companies for many years, here’s what I want you to know: Becoming your own boss can be one of the most rewarding things you will ever do.

But as anyone who’s managed anything before—whether it’s a team project, special event, or a solopreneur operation—knows, it can be challenging to run the ship.

You see, while there are standard operating procedures for working at an established company, there are no rules for entrepreneurs or CEOs. There’s no right or wrong way to do things.

So today, I’m sharing seven strategies that will help you navigate this new world with a greater sense of awareness, confidence, and success.

Becoming your own boss requires a paradigm shift. You must start feeding your mind differently so that you will think and act differently.

Start by becoming more self-aware. Take some time to identify your passions, strengths, weaknesses, how you lead, what your communication style is, and what your beliefs are. This exercise will help you build a foundation to build yourself up and create a plan tailored to meet your needs and goals.

Also, belief is the basis for everything. So, examine yours. Identify any belief that limits you and evaluate if it is really true. Let those beliefs go and gravitate toward the ones that empower and free you.

And this is non-negotiable…

Spend time reading every day. I also strongly recommend practicing autosuggestion and visualization each day and listening to audio programs, such as podcasts, frequently.

In the initial stages of planning to become your own boss, you’re frequently going to wonder what could go wrong. That’s not where you should put your energy.

If you don’t have the discipline to stop your thoughts from going down that path, you’re going to set the stage for things to go wrong. So, get ahead of this process by asking yourself upfront, “What’s the worst that can happen?”

Don’t think about something horrible that happened to someone else. Think of your own life.

Would the worst thing be that you have to go live with your parents? And, if so, would it be the end of the world?

Or maybe it would be that you could lose everything you have? If so, what would you do then?

There are no guarantees in life; however, we can train ourselves to look for the good in everything.

Bob has lost everything he had twice. When I first heard that, it freaked me out because I grew up with bankers, and I’m an investment advisor. So, the idea of losing it all was very unsettling.

But now I realize that it is a very freeing idea. If you created something once, you could create it again. And now that you know more, you can create it even bigger and better the next time, which is exactly what Bob did.

So, embrace the idea that even the worst that can happen won’t break you, and you can get everything you may lose—and more—back.

Then, set that idea aside and put your energy where it belongs—on all the things that can go just as you want them to.

#3: Recognize there is no right way

In the law industry, there’s always a right way. You do things a certain way all the time—no questions asked.

However, when you’re an entrepreneur, every situation, every project, and every problem is new. There is no precedent; so, you must decide what to do and how to do it on your own.

And while there is no right way to do things when you’re the CEO, I’ve learned, through a lot of trial and error, that there is always a better way.

While that may sound scary at first, if you understand and embrace this idea, you will begin to relax and adopt a mindset that’s different than ever before.

You won’t worry as much about being wrong. Instead, you’ll focus on doing and getting better and better, and you will start to create amazing things in your business and your life.

Successful women (and men) are very much aware of the work and dedication that is behind every step forward. They also know each significant achievement is the result of small successes attained each day. So, they develop morning routines/habits that allow them to make each day a success.

Consider incorporating some or all of the following activities into your morning routine: rise early, practice gratitude, meditate/visualize, read affirmations, or use autosuggestion, and devote time to reading.

#5: Don’t be afraid of failure

It’s scary to think of failing. But the truth is, if you’re going to become your own boss, you are going to fail at some things.

If you’re not willing to go out there and fail, you’re probably not going to do much of anything. So, it’s not a question of if you’re going to fail; it’s what you do when you fail. That is part of the entrepreneurial mindset.

I like to say, “Fear and growth go hand in hand.” When you face the fear (and there’s a lot of it when you’re in an entrepreneurial environment), you automatically experience the growth.

So, you want to feel the fear and do it anyway. Once you’ve done it, the fear will go away.

#6: Surround yourself with successful people

To be successful as a business owner, you must guard who you associate with. Because, like an elevator, your friends and associates are either taking you up or down.

You’re the average of the five people you associate with the most, so make sure those people reflect the type of person you want to be. Associate with people who are successful and who have what you want.

The pursuit of excellence brings the absolute best of you to bear on whatever you are doing.

The Admiral was a demanding officer who said to him: “Where did you come in your class at the Naval Academy?”

Jimmy Carter said he expected to be showered with praise, but instead, the Admiral confronted him with this penetrating question: “Did you do your best?”

No matter how you feel about what you’re doing, always do your best. Develop a mindset that is focused on pursuing excellence. It can make the difference between falling far short of your business goals and accomplishing things you never dreamed were possible.

7 Strategies for Women to Become Their Own Boss: https://bit.ly/2zpIyR5 #bobproctor