How Riches Come to You 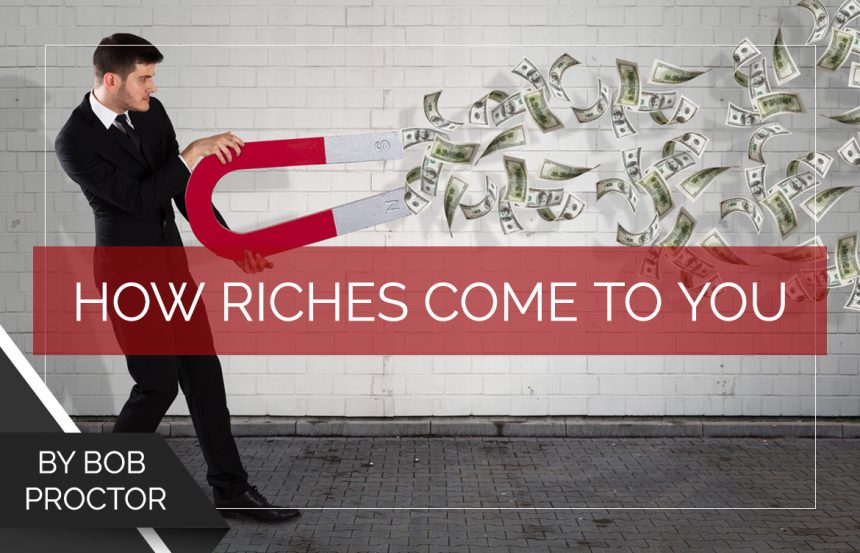 I’ve had some extraordinary mentors in my life, not least among them was Lloyd Conant.

Lloyd, who was Earl Nightingale’s business partner, was a visionary.

He would gently raise his hand in the air and leave it suspended in space. Then, his head would tilt slightly back, and the look in his eyes would have you thinking that he was staring right through the roof at some magnificent image high in the sky.

With a slight smile on his face, he would speak in a quiet but confident tone, and before you knew it, your mind was traveling with his.

Lloyd called what he was doing “Imagineering,” and whoever was present would be going on a journey of the mind to BE or DO whatever Lloyd chose. It was always a soul-awakening trip with Lloyd Conant at the helm. He sure knew how to take the lid off your mind.

One evening in 1969, Harold Gash from Little Rock, Arkansas, and I were guests in Lloyd’s home. We were sitting in his kitchen after dinner when Lloyd took us on one of those wild and marvelous trips. Before long, the three of us were busy building castles in space.

Reflecting on that evening, I realize how much Lloyd was enjoying himself. There he was in his kitchen, inspiring two of his top lieutenants, explaining how we were going to put Earl Nightingale’s motivational/educational recordings in every home in the world.

You see, Lloyd Conant believed everyone had infinite potential, and we were going to make them aware of this beautiful truth. Not only did Lloyd believe every word he said, but Harold and I believed them too. And we were ready to do whatever Lloyd asked of us.

It was on that evening in 1969 that Lloyd told Harold and me about “the little green book.”

He told us that he had stayed home all weekend reading and rereading its contents and how he was absolutely fascinated with the way the author shared profound wisdom.

Then the following Monday morning, he decided he would build a world-class organization.

Anyone who knows of the Nightingale-Conant Corporation is aware that Lloyd Conant did precisely what he said.

The title of “the little green book” is The Science of Getting Rich, a practical manual that has helped millions become rich.

In many ways, Lloyd Conant was the embodiment of the scientific principles outlined in this small book.

First, Lloyd was a beautiful and generous human being who dedicated his life to making the world a better place for everyone. He always dealt with people fairly, giving more than he took. Everyone who ever worked with Lloyd Conant would have nothing but good things to say about him.

Second, Lloyd never settled for what was reasonable. He always asked for something big, such as wanting to get Earl Nightingale’s recordings in every home in the world. He knew all desires for growth and richness were the Infinite seeking fuller expression through us.

Third, Lloyd used his “Imagineering” practice to form a clear image of what he wanted in his mind, and then he would journey into fantasy land to impress his creative thoughts on the formless substance—the “thinking stuff” from which all things are created.

And, finally, he understood that we receive according to the level of our faith. So, he would maintain absolute and unwavering faith that what he wanted, which was to make Lloyd’s vision of building a world-class organization, was coming.

To me, the Nightingale-Conant Corporation was a monument to Lloyd’s dream, his vision, and his understanding of “the little green book.”

Your Right to be Rich

The purpose of all life is development. From a caterpillar to a human being, every living thing has an inalienable right to all the development it is capable of attaining.

However, unlike any other creature on earth, you and I have powerful mental faculties that allow us to create any environment we want. And we have unlimited use of all the things which may be necessary to reach our highest potential.

In other words, we have the right to be rich.

You should never be satisfied with what you’ve got if you are capable of being, doing, and having more. You should have everything you want and need to contribute to the power, beauty, and richness of life.

Wallace Wattles said, “You can render God and humanity no greater service than to the make the most of yourself.”

You just need to decide if you are willing to do what is necessary for your fullest mental, spiritual, and physical unfolding.

P.S. For more information and specific affirmations for becoming rich, download our infographic below.