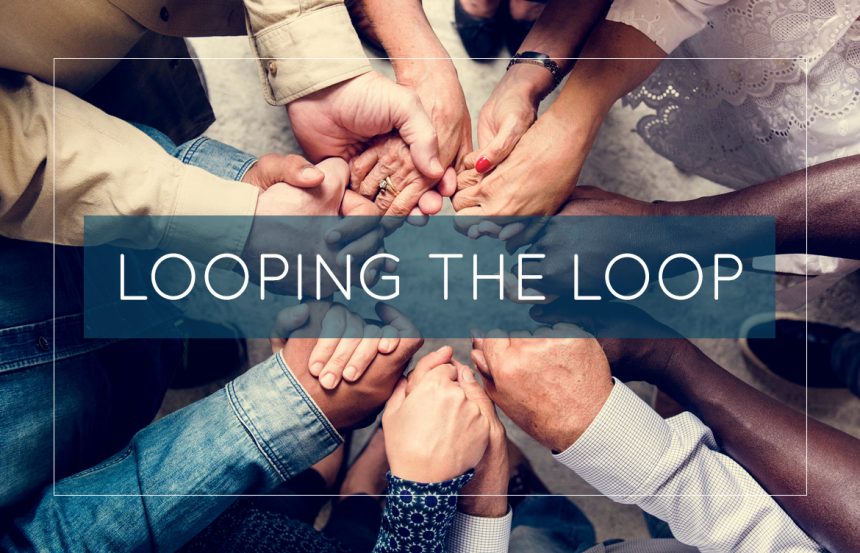 I grew up in Romania during communism. Despite my mom’s efforts to make sure my brother and I had everything we needed, as kids we were very aware of our lack of means and the poverty around us (my mom was a single parent raising us on a teacher’s salary).

When communism fell in 1989, during the Christmas school break, I was nine. I remember the euphoria that followed, we kids dancing in the living room at the thought of finally being able to see bananas, while the single TV station, usually propaganda-filled, was broadcasting horrific but hopeful images.

Shortly afterward, we received at my school a large box from Germany filled with toys that our teachers were instructed to distribute to students. When my name was called, I got a small fabric bunny. It was not a new toy, but to me it was amazing. I kept it for more than 20 years and even took it with me when I later moved to Canada. I was happy to get the bunny, of course, but also puzzled: we were told that German kids had sent the toys—but why? Why didn’t they keep them for themselves? It was hard for me to conceive of a life where kids had so many toys that they could spare a few. And yet, that space of giving was something I started aspiring to.

During the ten years following the revolution, my mom established and participated in several grassroots organizations. She took us, along with her students, on trips and we participated in workshops where we would learn about environment protection, democracy, women’s rights, etc. I understood that there was always someone worse off than us and that we always had something to share.

After high school, I moved to Canada, got a university degree and started working and volunteering for NGOs and human rights organizations in Canada and throughout the world. Wherever I went, I always had the feeling that I was receiving more from the locals than I was able to give. And somehow, those who had the least were the ones who shared the most: generosity was natural to them because they understood what it felt like to lack something. For almost a year, while working in Nepal, I struggled with the fact that saying “thank you” was considered too formal; within the Tibetan community in India, also, there was no need to say “thank you” for gifts or help—it was simply understood that people should help each other.

Over the years, out of the many amazing, kind people I met, two individuals, in particular, have impressed me through the scope and depth of their compassion and generosity. Both live in Dharamshala, a small town in the Indian Himalayas, where I lived for four years. The first is H.H. the Dalai Lama, who has been living there for decades within the Tibetan community in exile; his work towards a more compassionate and kind world needs no introduction. The second is Dr. Barbara Nath Wiser, an Austrian doctor whose organization, Nishtha, has been providing health care, education, and social services to destitute children and women, earning the respect and gratitude of everyone in the community, including the Dalai Lama himself.

I was living in Dharamshala when my son was born. My husband and I wanted him to benefit from the Dalai Lama’s wisdom, beyond the privilege of living in the same town and attending his teachings. I couldn’t find any books by the Dalai Lama for young children, so, together with a wonderful group of friends, we created the first kids’ book to illustrate the Dalai Lama’s advice for children. His Holiness was kind enough to write the forward to our book, and it was later translated into five languages.

The following years, during our son’s check-up visits at Dr. Barbara’s clinic, we saw things that broke my heart, but also made me understand how vital and empowering her programs are. Children who have never been able to walk are given weekly therapy, and are even able to play, with dedicated social workers’ help; young kids are given shoes so that they can attend school; single women and widows are taught skills that allow them to support themselves and their families. Services that I normally take for granted are only available through the dedication and generosity of Nishtha’s amazing team. We support their work by donating a portion of the book proceeds to Nishtha.

Looking back, I realize that the years spent working in developing countries, and becoming a mother, have helped me “loop the loop”. I went from not understanding why someone I didn’t even know would give me a toy of theirs… to, years later, teaching my son to do the same. I hope that our small kids’ book will be for somewhat a small toy bunny was for me as a child: a seed that would grow into a deeper understanding of our interconnectedness and the importance of being kind.

Eva Cirnu is a communications consultant based in Montreal. She works and volunteers at human rights organizations, with a focus on Tibet. www.evacirnu.com

For more information about Nishtha please visit – http://nishtha-hp.org/
Book ‘The Dalai Lama’s advice for children of all ages’ – https://dalailama4children.com/
Available on Amazon: https://amzn.to/2RpBmLj