Why Most People Work So Hard 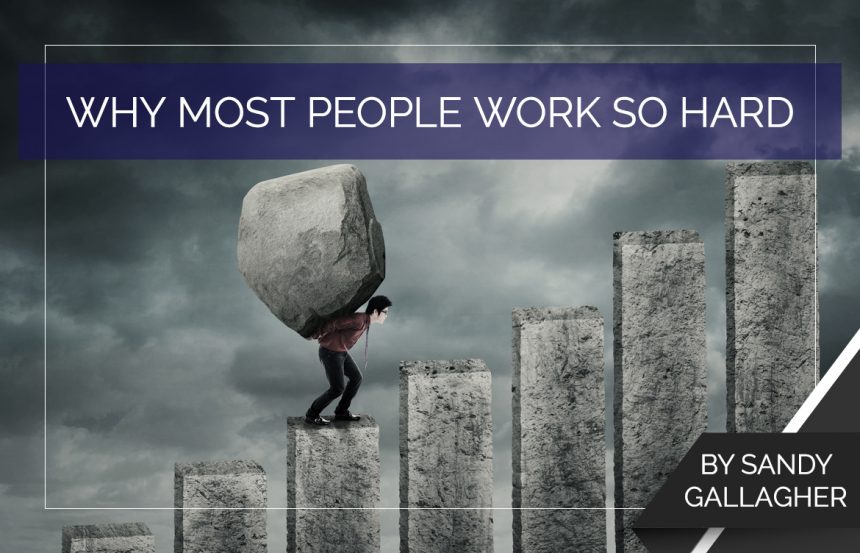 I knew, at a very early age, that I wanted to be a banking attorney like my father when I grew up.

I had learned, as most children do, that I could do anything I wanted to do if I worked hard and got good grades.

I excelled in school and received many honors, including graduating as the number one banking law student in the country.

When I got out of school, I practiced on Wall Street with a very well-known firm for six years.

Then I moved to the West Coast to practice with my father. I worked hard in the practice for almost 22 years, doing more than $100 billion in deals.

There I was running a thriving community banking practice, happy that I had achieved the goals I had set since I was a child.

But something was off…

When I looked around the boardrooms, I was surrounded by brilliant people who were working themselves to the bone, but they still weren’t getting the results they wanted.

That’s when I realized that the adage “Hard work brings success” is not necessarily true.

Even though our parents and teachers taught us that getting good grades is important to our success, lots of kids who do well in school struggle for the rest of their lives. While others who barely make it through school sometimes go on to enjoy extraordinary success.

We’re also taught to please the adults and authority figures around us. But what about pleasing ourselves?

What about, instead of doing what others want or expect from us, we let our minds wander and chose goals that are best for us?

What traps the masses

At the beginning of his wonderful book, You2, Price Pritchett tells a true story about witnessing a life-or-death struggle.

The story is about a small fly trying desperately to fly through the glass of a windowpane. Its whining wings told the sad story: the fly’s strategy was to try harder.

Of course, trying harder to fly through the window would never work. Yet, the fly continued to hit the glass even though it would never escape to freedom using this strategy.

Pritchett goes on to explain that just a few feet away, the door is open. In just ten seconds of flying time, the fly could have reached the outside world it was seeking.

Contrary to what most people think, trying harder isn’t necessarily the solution to achieving more.

You think you are really making progress when you’re charging ahead, head-down, toward one of our goals. But when you are in a head-down, nose-to-the-grindstone mode, you are only working and not thinking properly.

Are you too goal-oriented?

If you feel burned out from working too hard, answer the following questions:

“Is the goal I’m working toward—a promotion, a raise, building a business—what I really want?”

“Does what I’m working so hard for really excite me?

“Is working this hard advancing my goals or someone else’s?

“Could I be pursuing an exciting goal for my life if I weren’t so fixated on hitting the goals I’ve already committed to?”

It’s part of the paradigm

Most of us were programmed to work hard. There’s nothing wrong with that.

The question you and I have to answer is: Why are we working so hard?

Are we doing it because we love what we’re doing so much that it doesn’t feel like work?

Are we doing it because what we’re working on is part of a grand vision we have for our life? Or are we plodding forward on a path that we didn’t choose?

Bob and I work hard because we’re passionate about what we do every day. It makes us happy; we are growing each day, and we are serving millions of people around the world.

However, when you’re working hard just to pay the bills, and you’re focused on checking things off your to-do list, you aren’t imagining possibilities. You are not allowing your mind to wander and come up with incredible, world-changing ideas.

Your to-do list will always be there. So, working hard to tick things off of it is not the path to success.

The path to success leads to you making your mark on this planet in the way that only you can.

Yes, it will require hard work to follow your dreams. But it’s not the kind of work that drains you and leaves you dreading Monday mornings.

The first step on your path to real success is to slow down and take some time to imagine a big, brighter, bolder future. A future that sets your soul on fire.

Shut out your physical senses, engage your mental faculties, and allow yourself to fantasize. Don’t worry about whether it’s practical or how you can do it. The only thing you need to consider is if you want it.

Your dream should not be practical. Every dream that has ever been brought to reality started off being impractical, impossible even.

Making small, incremental steps along a path that your employer laid out for you is hard work because it’s not worthy of you.

However, making progress, however small it may be, is far more exciting and rewarding. You find yourself jumping out of bed to get started each day.

Stop working so hard as an extra in your own movie. Write the screenplay of the life you want, with you as the star. See it in your mind, hold on to the image; then you can make it real!

P.S. The universe is waiting for the gifts that you have to offer this world. Don’t worry about what others want from or for you. Download your permission slip to break free below.