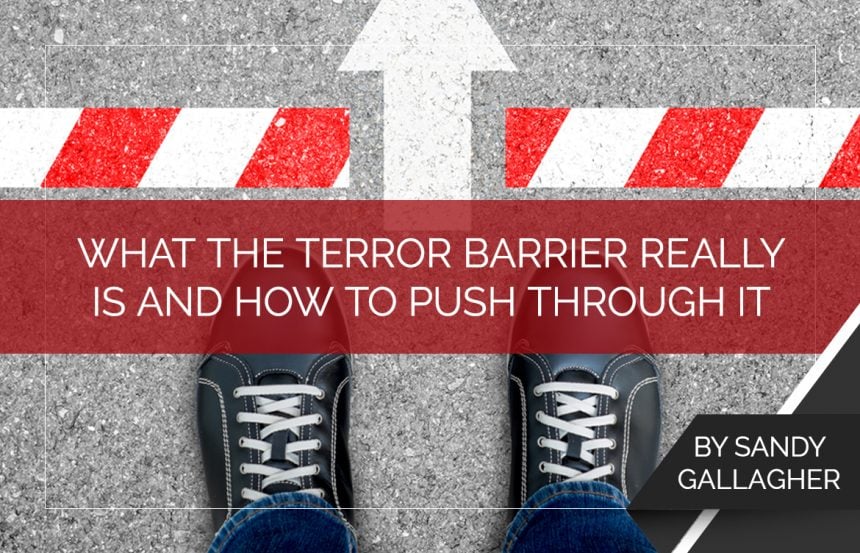 “Spirit is always for expansion and fuller expression.”

Not just some of the time. Not even most of the time. Spirit expresses itself through us, and it wants us to keep growing all the time.

That’s why Bob and I urge people to go after something that they really want when setting a goal.

You should never settle for something you’ve done before or something you think you can achieve. You grow by fantasizing and going after something that really gets you jazzed and lights a fire in your belly.

Bob calls this a “C-type Goal.” This is a goal that:

The problem is, when most people can’t see a glimpse of the HOW the moment they step out and act on their goal, they come face to face with worry, doubt, fear and anxiety.

When this happens, they have two choices.

In this post, I’ll explain what this “terror barrier” is. Understanding this should help you step forward into the freedom you desire instead of slipping back into the safety of what you know.

There are two parts to our mind – the conscious or thinking mind and the subconscious mind, which is the emotional part of the mind.

The conscious mind can accept, reject, and originate ideas. This is the part of the mind that allows you to originate and then accept or reject a C-type goal.

Now, let’s walk through an example to make this clear.

When I worked as a lawyer for 20 years, I had a certain way of seeing or thinking about myself—let’s call it X-type thinking. The X thoughts in my conscious mind were in harmony with the beliefs that resided in my subconscious mind about being a lawyer, growing my law practice, etc.

However, when I came up with a C-type goal of working with Bob Proctor, it introduced a new type of thought, a Y idea.

Now, as long as that Y idea remained in my conscious mind, it was no big deal because it was not reaching my subconscious mind and affecting how I felt.

But when I started acting on my new idea and taking steps to actually start working with Bob, I became emotionally involved with the idea. Then I had both X and Y ideas in my subconscious mind, and they were like oil and water. They didn’t mix.

So, my central nervous system, which is the most powerful computer system you could ever imagine, started going crazy. I got anxious, and I started thinking, “Oh my gosh! What have I just done? How am I going to do this?”

It was a very uncomfortable feeling because my paradigm wanted me to set goals that allowed me to stay where things were comfortable and familiar (being a lawyer). It didn’t want me to charter unknown territory.

That’s what happens to everyone when we impress a new idea that takes us out of our comfort zone on the subconscious mind. We immediately start trying to figure out how we’re going to do it. And even though most of us are learned, we’re reluctant to keep learning or keep moving so we can figure it out.

The result is we limit ourselves to what we already know and set goals that we know we can achieve (an A- or B-type goal).

How you can use this knowledge to your advantage

The next time you want to act on a big idea, instead of trying to figure out the “how ” complete the following three practices:

Another way to get a grasp on this is to recognize the four psychological stages you go through when you’re dealing with the terror barrier:

Stage 1—Bondage: In this stage, you are getting X-type results, the status quo results you no longer want (see illustration below). The results are caused by the X-type conditioning in the subconscious mind.

This stage is called “bondage” because even though you have the ability to originate ideas, you continue to create X-type thoughts from the spiritual power that flows into your conscious mind.

Stage 2—Reason: On a conscious level, you create a C-type goal, a new idea of living the life you want, illustrated by the Y.

However, you continue to get X-type results—results that keep you where you are—because you don’t internalize the Y idea by acting on it.

In other words, you just think about the Y idea on a conscious level without getting emotionally involved with it and planting it in your subconscious mind.

Stage 3—Conflict: Before we cover this state, it’s important to understand that the ideas you are emotionally involved with control the vibration you are in. Vibration on a conscious level is referred to as feeling.

The results you are getting now come from doing things you know how to do. You feel comfortable in the vibration you are in because you have been living with it every day, perhaps most of your life.

In the conflict stage, you don’t just think about it; you act on and become emotionally involved with the Y idea.

The moment the Y-type idea is impressed on the X-type conditioning, the electrical system in your body goes haywire, and you are in an XY vibration.

At this point, worry, fear, and anxiety strike on a physical level. All three hit so fast, and with such impact, your mind goes into a whacky state because the new Y idea is driving you ahead and X idea is pulling you back.

The conflict is unbearable. You’re too scared to go ahead, you don’t want to go back, and you can’t stay where you are.

You may quickly bounce off the terror barrier back to bondage and then rationalize to yourself why that is a good place to be. It’s comfortable… you are familiar with it… it’s good enough.

However, going ahead is the only way your life will improve. Unfortunately, a lack of understanding of exactly what is taking place inside causes you to retreat to familiar territory.

Stage 4—Freedom: Understanding permits you to step forward into growth and freedom. The doubt, fear, and anxiety have not left; however, through knowledge or study, you know if you persist, it will leave.

By continually getting involved with the Y idea (the C-type goal) and acting on it—despite the fear—over a relatively short period, the conditioning changes and you are living in a new reality.

You have two choices…

The doubt, fear, and worry that you experience when stepping out of your comfort zone may cause you to do what most people do: retreat to what you perceive as safety.

Unfortunately, that’s the most dangerous place you could live because there’s no growth. And where there is no growth, there is disintegration.

I say that because nothing ever stays the same. You’re either moving forward towards something bigger and better, or you’re going in the opposite direction.

Understanding the terror barrier won’t make it go away. Bob still runs up against it whenever he sets a new goal, and he’s been studying this for more than half a century. Of course, he understands what’s happening, and he crashes right through it.

In fact, anyone who has ever accomplished anything of any consequence has come up against the terror barrier, and they move into and through it.

Fill out the box below to download and print the graphic below to remind you of what’s going each time you face the terror barrier and what’s on the other side when you keep going.

Then, commit to crashing through the terror barrier the next time it comes up for you. I guarantee the rewards of working through the fear, changing the paradigm, and pushing on will be truly amazing.