You Attract What You Send Out 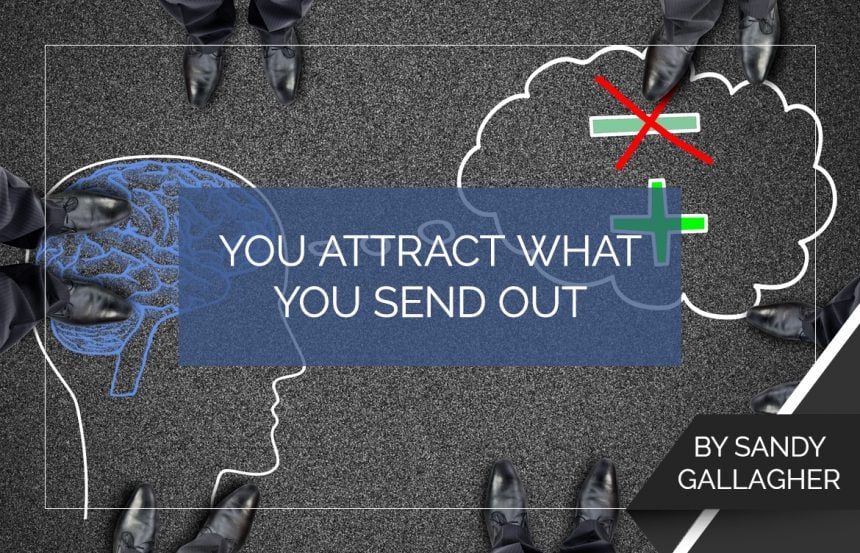 Our attitude is an indication of what we are thinking and feeling and thus, how we are acting.

Attitude is the energy we are sending out into the world.

And as illustrated by the story below, attitude proclaims to the world what we think of ourselves and what we expect to be, do, and have in life.

In 1981, a young crew of U.S. Coast Guard aviation graduates was assigned to a base in New Orleans, Louisiana.

Most days, the crew worked a normal 8:00 am – 5:00 pm. schedule. However, every fourth day, they were required to remain on duty for 24 hours to respond to after-hour rescue missions.

When there wasn’t any work to be completed in the evenings of the overnight shifts, the crew would hang out in the breakroom and watch television.

It was a busy and sometimes stressful job, so a few times a year, the Commanding Officer would have crawfish, baked potatoes, corn on the cob, and beer brought in. The crew would get the afternoon off, and all but one of them would eat, drink, and relax on the deck until their shift ended.

Pam Sumpter, one member of this young and dedicated crew, never joined the team in the breakroom when she was on duty for 24 hours.

And although she was friendly and everyone liked her, Pam would also keep to herself on the afternoons the crew got off to enjoy the tasty food and drinks.

Instead, she would find a quiet place to read.

The crew would often encourage her to put her book down so that she could have some fun with them. But Pam would politely decline and continue to read.

Although she wasn’t a joiner, Pam was a hard worker, and she always volunteered to help without being asked.

Even on the days when everyone else spent the afternoon relaxing, eating, and drinking, she always helped the others clean up before going home for the day.

Her eyes were on the prize

When graduating from Aviation School, all enlisted members were assigned a ranking of E4, and the highest rank they could reach during their career was E10.

Most graduates set their sights on reaching the next pay grade. However, Pam set her goal well beyond becoming an E5. She held a vision of being an E9.

You see, at any given time, there is only ONE E10 in the Coach Guard, and only an E9 can fill that position.

So, right out of the gate, Pam was striving for the highest position she could attain on her own merit.

An enlisted person had to remain in their current position for a minimum of one to two years and then pass a test before advancing to the next rank.

If they passed the exam, the Coast Guard compared their score to every other person in their rank and field across the entire organization. The Coast Guard would decide how many of each rank they needed across the country. If they needed five people, they picked the top five candidates based on test scores, time of overall service, performance evaluations, and awards.

The higher ranks had fewer positions available, which is why there is only one E10 in the entire Coast Guard.

What separated Pam from her peers

The difference between Pam and most others was her attitude.

Although they were all dedicated to serving others and their country, Pam wasn’t satisfied with where she was in her career. She fixed her eyes on becoming an E9, and her thoughts, feelings, and actions were aligned with her vision.

So, unlike her peers who would wait until about a month before taking a test to start studying, Pam studied the books for each rank throughout the year. She wanted to live what she was learning. And she took each test as soon as she was eligible.

As a result, she passed every test and quickly moved up the ranks. To do that, she not only had to pass the test, but she had to have scored high enough to beat out other people around the country, have great evaluations, and have awards for the work she did.

The bottom line is…

Pam knew she was an E9, even when she was an E4. And she acted as if she was the person she wanted to become, and she became an E9 in record time.

Bob will be the first to admit that he used to have a terrible attitude. He sent out negative energy and, as a result, he attracted negative results…

He was broke, unhappy, and he got sick fairly often.

However, today the company Bob co-owns does millions of dollars in business each year. It operates in 47 different countries, and it’s growing every day. And here he is 58 years later with a healthy body and very cheery disposition.

All he really did was change his attitude about what he wanted in life.

I’d like for you to think about Pam’s story and Bob’s story for a few moments and relate them to your own life.

If you’re not as happy, healthy, and wealthy as you’d like to be, I urge you to adopt a more positive attitude and start acting like the person you want to become

Do it now and attract your deepest desires.