How to Make Your Goals Happen 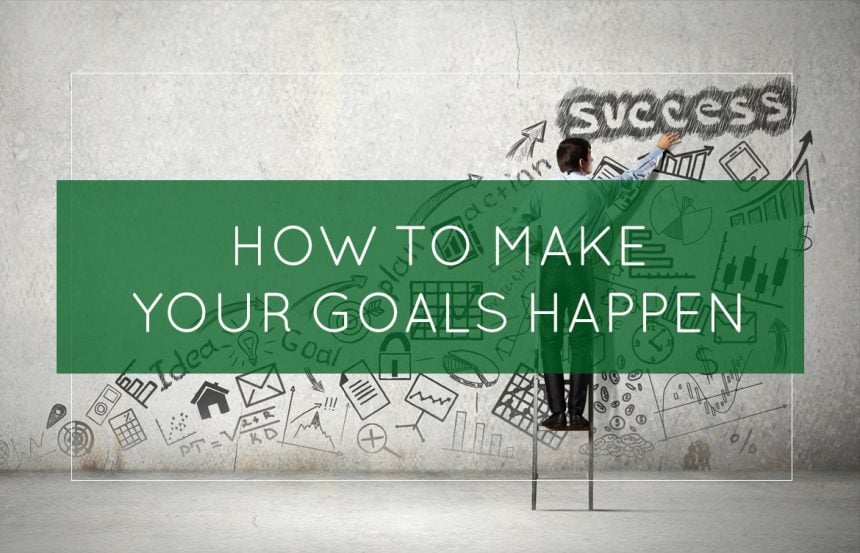 We can do so much more than we give ourselves credit for. We have an incredible, unlimited resource available to us. In fact, it would shock most people to find out just how much could be achieved in their lifetimes if only they had tried with what was immediately available to them. Because most people do not understand how much potential they have, they limit their aspirations to the level at which they know they can achieve.

Here are just four considerations I encourage you to study and put in place in your life as you begin to set – and achieve – your goals in the year ahead.

At a leading university in the United States, a study was conducted to evaluate the power of dreams and necessity of dreams. The participants were attached to brainwave monitoring devices. The machines would indicate exactly when the patients began dreaming. Whenever a person began dreaming, he or she would be awakened, interrupting these thoughts and dreams. The results came as such a shock to the team that, after 7 days, they had to abandon the project because of the serious effects on the participants when they were not allowed to dream.

The patients became neurotic. There were signs of deep, emotional upset and imbalance due to dream deprivation. Some of the patients were on the verge of insanity. The experiment was abandoned; the risk was too high.

Dreaming is essential to mental health. It is even more important to the person who desires more of the good life.

Anyone who truly wants to open the world of wealth must become a certified dreamer!

2) Recognize that you have the power to overcome your obstacles.

I call them the Goal-Sabotaging Hurdles, and unless you conquer them, you will never achieve your goals. In fact, you won’t even get off the mark until you make some strong decisions about how you react to these deadly hurdles.

People often get really charged up about some goal or dream. They start planning and designing things, then give up because they fear it might fail. How sad! Every great and noble goal has a failure factor built in. If it didn’t, everyone would have already attained that goal!

It’s so easy to get lost in this trap of Goal-Sabotaging Hurdles. Refuse to be stopped. Refuse to abandon your goal just because it looks like it might fail. Don’t let anyone convince you to stop when you know inside that you will succeed.

3) Recognize the hurdles that try to keep you from your goals.

As you work toward your goal, understand these Goal-Sabotaging Hurdles so that you will recognize them for what they are – mere hurdles.

The Lack Hurdle
Ever wonder how many great ideas were rejected because the originator of that idea did not have the time, the money, or the manpower to bring the idea into fruition? Start building and creating a great life for yourself now. It doesn’t matter what you might THINK is missing – it’s all there for you. If you hold the image of your goal in your mind, you will attract everyone and everything you need for the fulfillment of that goal. You are like a magnet.

Refuse to concentrate on lack. If your goal is big enough, the money, time, and help will all appear. Remember, the mind is like a Polaroid camera. It sees an image – in this case the dream image – and produces the physical equivalent.

The Stretch Hurdle
People often give up on a big goal because they know they will have to stretch. Stretching, for the most part, is uncomfortable so they abandon the great idea or goal. If you are to win and win big in life, you will have to learn how to be flexible.

Everyone has a comfort zone determined by previous conditioning. The important thing is to be willing to grow and to change. Succeeding in life may require you to do things that are uncomfortable. Do it anyway! Success is the important thing, not whether you did it your way or not.

The Global Hurdle
When Columbus set sail, did he have the whole picture? When you placed a deposit to buy your first house, did you know exactly where the rest of the down payment would come from?

Most people feel they must reject dreams or goals because they don’t have the whole or global picture. They aren’t sure of all the composite parts, so they throw in the towel. Keep ideas flowing and give them time to germinate.

They can’t grow if you yank them out of the ground simply because you don’t know exactly how the whole thing will pan out.

The Success Hurdle
People fear failure … but many also fear success. As human beings, our very nature is to be afraid of that which we do not understand. The reason many fear success is due to the fact that they have never experienced it. You will often hear these people say, “Money will make you greedy and evil,” when in truth, money has nothing to do with it. Poor and rich alike suffer from greed and/or evil behavior.

Make no little plans; they have no magic to stir man’s blood
and probably will not be realized. Make big plans; aim high in hope and in work, remembering that a noble and logical diagram will not die.

People will get you to reject an idea or goal because there may be something wrong with it. There’s something wrong with every good idea. What’s wrong with these folks?! Let’s keep the goal, even with its imperfections. So you don’t have the whole solution today, so what? Our good friend, Dr. Robert Schuller, said it best: “There are no problems, there’s only a shortage of ideas.”

The Impossible Hurdle
Nothing is impossible! Erase that word from your vocabulary. Thomas Edison was branded as being “slow” by his teachers. He left school after only three months of formal education. He burned down his father’s barn and used to sit on eggs to try to make them hatch. He was branded a misfit by society, yet he went on to become one of the greatest inventors of all time, creating over 1,000 inventions including the electric light, phonograph and movie camera.

People are limited by their own beliefs. They give up because they perceive something is impossible. What was Edison told when he wanted to invent a light bulb? He did it anyway! They told Henry Ford that it was impossible to mass- produce the automobile, but he did it. They told Alexander Graham Bell that he could not create the telephone, but he did it. While one person is deciding why something will not work, another is making it work!

The Hard Work Hurdle
Never reject an idea, dream or goal simply because it will be hard work. Success rarely comes without it. The thing is to keep the idea alive long enough to be able to devote enough energy and/or resources toward the goal to see it comes to pass.

The world of welfare and broken dreams is full of people who refuse to advance themselves because they won’t work hard. If you want to move ahead and design the life you want, then stick with it and keep moving forward, one step at a time.

All too often, people abandon their goals because of the work it requires at the beginning. Reaching a goal is like pushing a snowball down a hill. You push and push at the start, until you make it so big that the snowball starts to roll on its own.

4) Understand the difference between goal setting vs. goal achieving.

Goal setting is largely an intellectual process of determining the direction of your goals. It involves using your mental faculties to create a picture on the screen of your mind.

Goal achieving is the process of getting emotionally involved in that idea and moving in the direction of that picture through your actions.

Here are some practical action steps you can take today to move the mental picture of your goal into practical form:

Understand this: You can have, do or be, anything you want! It’s a choice and it’s your choice. Begin today! I’ve given you the compass – now stay on course.

Bob Proctor has just released the most in-depth study of Napoleon Hill’s book Think and Grow Rich. It is called Living the Legacy. Take a moment and go here to read all the details.