The Six Ghosts of Fear 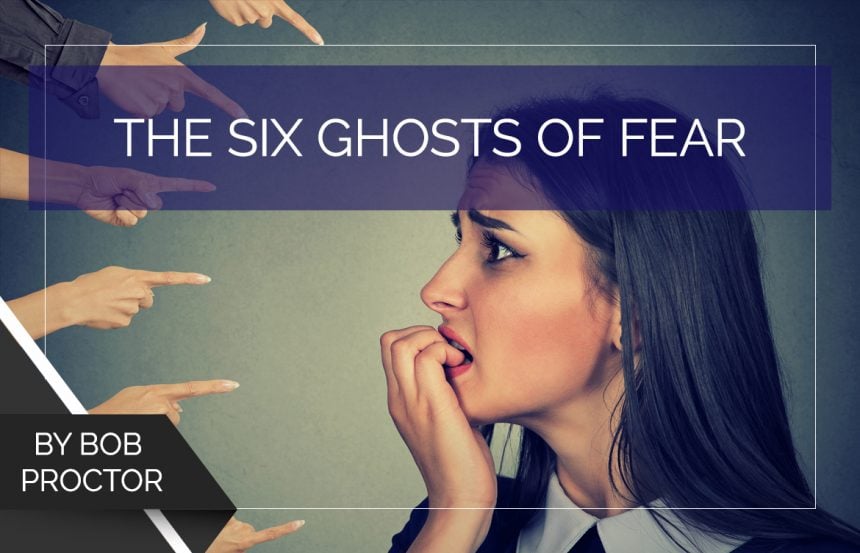 I’ve been studying Think and Grow Rich by Napoleon Hill every day since October 21, 1961.

So, I know it pretty well.

As you may know, Napoleon Hill spent many, many years researching and analyzing success. In the end, he found that there are 13 principles for accumulating a fortune or for succeeding in any endeavor.

However, at the end of the 13th principle, Hill included a chapter called “The Six Ghosts of Fear.”

At first, it struck me that Hill included the chapter there, but then it became clear to me: Overcoming these “ghosts of fear” is key to being able to execute the 13 principles of success because fear stops more people from reaching their goals and dreams than anything else.

Such a bad way to live

They don’t enjoy what they do. They’re not doing well. They feel like they’re overworked and underpaid. Sill, they’re afraid to quit.

That was me many, many years ago.

I was looking for something to do after I got out of the Navy. I decided to take a course on welding, and I ended up working for a man who was not a nice person. He treated me terribly.

It was in the dead of winter, so it was cold and snowy all the time. And I had to go from one end of the city to the other to get there. I hated going to and working there.

But all the way there, I was afraid I was going to get fired.

Why do we continue to do things that we don’t like?

Because we’re afraid we won’t get anything else or anything better. And that fear keeps us from pursuing the things that we do like—the things we want to be, do and have in life.

It’s all in your head

Napoleon Hill made it very clear that if you don’t overcome your fears, you’re probably about as far as you’re ever going to go.

He called them “ghosts” because the fear is not real. Fear is nothing more than a state of mind.

Hill identified the following as six basic fears that every human being suffers with at one time or another. As you read through some of the signs and symptoms of each fear, determine how many you have:

1. Poverty: Among other things, the fear of poverty…

• paralyzes your ability to reason

• invites failure in every conceivable form

• leads to sleeplessness, misery, and unhappiness

And six symptoms that show fear of poverty include indifference, indecision, doubt, worry, over caution and procrastination.

Are any of the things listed above true for you?

Take some time to consider this because the fear of poverty is the most destructive of the six basic fears.

While it may not be pleasant, this kind of examination and self-analysis is essential if you want more than mediocrity, struggle and poverty in life.

2. Criticism: The fear of criticism…

• destroys the power of imagination

Here are seven symptoms that show fear of criticism:

3. Ill health: Many people fear ill health because of the terrible pictures that have been planted in their mind of what may happen if sickness or death should overtake them.

Consider the following questions to see if you may have a fear of ill health:

• Do you look for and expect to find the symptoms of all kinds of diseases?

• Do you experiment with diets, physical exercises and home remedies without professional guidance?

• Are you in the habit of talking about illness or concentrating your mind upon disease while expecting its appearance?

• Are you susceptible to illness and disease because your resistance is low?

• Do you use imaginary illness as a lure for sympathy?

• Do you read about illness and worry about the possibility of being stricken with it?

4. Lost love: Fear of loss of love grew out of the fact that men, by nature, are polygamous and they are not to be trusted in the hands of rivals.

Do you tend to be jealous or suspicious of people without any reasonable evidence?

Are you in the habit of finding fault with friends, relatives, business associates and loved one at the slightest provocation or for no reason at all?

Do you gamble or spend beyond your means because you believe or hope that you can buy love?

If you answered yes to any of the questions above, you might have a fear of loss of love.

If you have any of the following symptoms, you may have a fear of old age:

• you apologize for your age

• you masquerade as a younger person.

6. Death: To some, this is the cruelest of all the basic fears. But as Napoleon Hill points out, if death is not mere change or transition, then nothing comes after death except a long, eternal, peaceful sleep. And since sleep is nothing to be feared, you may wipe out forever the fear of death.

• mental depression after getting ill or a loss of love.

In our new program, Living the Legacy, I walk you through Napoleon Hill’s 13 Principles of Success.

I also explain what happens to you on the inside when you don’t know how to overcome the ghosts of fear and what happens when you do. It’s one of 15 amazing lessons that help you finally bridge the gap between Think and Grow Rich and YOUR success.

Some people say education like this is expensive. I suppose there are many reasons to look at it like that—especially with so many students leaving school with a lot of debt and then having a difficult time finding the job they want.

There’s a quote that says, “If you think education is expensive, try ignorance.” To that, I say Amen.

The only way to overcome ignorance is through study. There is no other way to do it.

The power that fear has over you can be drained away and dissipated to the point that it is all but non-existent. However, you must do this through education and understanding.

Understanding shows you that you don’t ‘fight’ to make fear disappear, you invite it in and encourage it to take a back seat to all that you desire. You are the director of your life, and you can have anything that you want. All that is necessary is to control the flow of your thought energy that flows freely to and through you.

P.S. Want a visual (and deeper) understanding of what happens when fear is your state of mind? Get the download below.