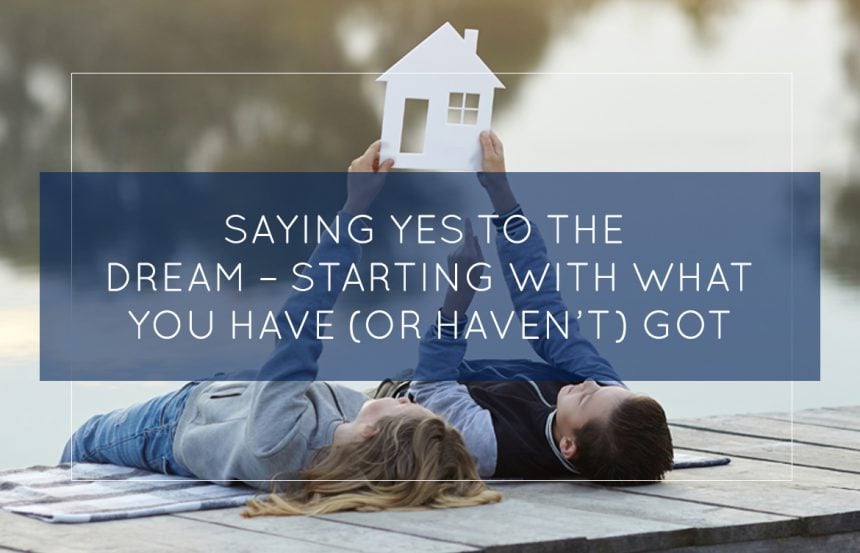 Trace was an entrepreneur all his life, running a one-person freelance consulting company with an income that fluctuated up and down every month – In March income was high, in April income was low, and there was never a steady stream. He came from a family background of regular, working-class people, so his results were considered quite normal, though he knew he could do much better.

Sabrina, Trace’s wife, was earning just above minimum wage, working for a Yellow Pages ad agency, performing quality control of advertisements, obviously not earning very much money. She, like her husband, came from a very traditional family background and was primarily focused on simply making ends meet and surviving.

They were living in a small apartment in a California neighborhood that was going downhill. Regularly, gunshots and sirens could be heard just across the street, and it was becoming clear: It was time to move on, and do so as quickly as possible.

Never having considered homeownership – let alone a “dream home” – one day, Trace was sitting in one of his community college classes when he discovered that one of his classmates worked for a mortgage company. They got to talking, and lo and behold, his classmate convinced him that – despite low and unreliable income – there was a First Time Home Buyers financing program that they could look into, which not only would allow them to move to a safer neighborhood – but also to OWN a home!

Trace began stepping into the idea and the vision of what it would feel like to be a homeowner. Very few people in his family had achieved this goal – in fact, at the time, none of his siblings or even his parents owned their own homes- everyone was renting and struggling to make ends meet. So while it felt like a big “stretch”, it was very attractive and alluring.

As you can imagine, the idea felt very good. He imagined how proud he would be, owning his own home – in a nice neighborhood, with lots of space and a separate area for his home office. Having experienced near-homelessness at one point a few years earlier, and sleeping for 6 months on a bare floor with nothing but a blanket and pillow, home ownership definitely was a brand new idea that lit him up.

Talking with his wife Sabrina, Trace tried to explain to her that it was, in fact, possible to enter the world of home ownership for them, despite all the “convincing facts” that they were not ideal candidates for such a thing, and the real estate market being at record highs in California.

After a number of weeks, the two of them began to become more aligned, and they both started to believe in this dream, in ever increasing amounts of desire as they looked at home listings online.

One day, the desire became so great, they began scheduling appointments to look at homes. Most properties that they really liked seemed well beyond their budget, but they mustered up the courage to look at even some of the more highly-priced listings.

Then the day came: Trace found the perfect home during one of his Internet searches. From the photos, it did not look like a dream home, but he knew that they could turn it into one after some renovating, and it would be a home they could truly call theirs, buying it and then proceeding with a number of renovation projects – from the floors, to the ceilings, to the light fixtures, to a new kitchen … the dream home was clear in his mind, and the possibilities were exciting!

So, Sabrina and Trace drove out to the home to look at it. It was even better than Trace had imagined. Sabrina wasn’t as convinced, because there was a lot of work needing to be done: But she trusted Trace’s vision for what was possible, and they made an offer just one day after it had been listed for sale on the market.

Even the listing agent was surprised and tried to talk Trace out of making an offer so quickly, but he knew this home was destined to be their first home, and that they could turn it into their dream home.

Within a matter of approximately 3 months, they had been able to qualify for the financing, found the property to turn into their dream, and had made an offer and closed the deal.

Before they even took possession of the home, they had already begun their remodeling projects, and in a short number of weeks they were living in the home, completely remodeled and fitting the exact picture they held in their minds of what their first dream home should be like.

It was exactly what they wanted, both in size and location: It had a large park-like front yard, a very “homey” feeling, and it was in a very beautiful and safe neighborhood … it also had the perfect workspace for Trace to conduct business, which is from where he enjoyed his first annual income of just under 6 figures, which was a dream come true in itself.

Since then, Trace and Sabrina have manifested a total of four homes in California and Austria, and are in the process of manifesting their fifth at the time of this message.

As soon as you flip the switch onto the thought – and feeling – a pattern that you CAN… when you hold that vision and keep taking action, you inevitably will. It’s “the law”.

Many people around the world have given Peggy McColl the title of “The Master Manifester” because she has set so many huge, “unrealistic” goals and achieved them with ease. She discovered that setting and achieving “C-Type” goals related to Real Estate are a playground for manifesting everything else in your life – and has created a NEW eBook that shows you how you can manifest your own dream home, starting where you are with what you have (or haven’t) got right now. Click here to download your FREE copy now.