How Music Saved My Life and Became My Magic Wand 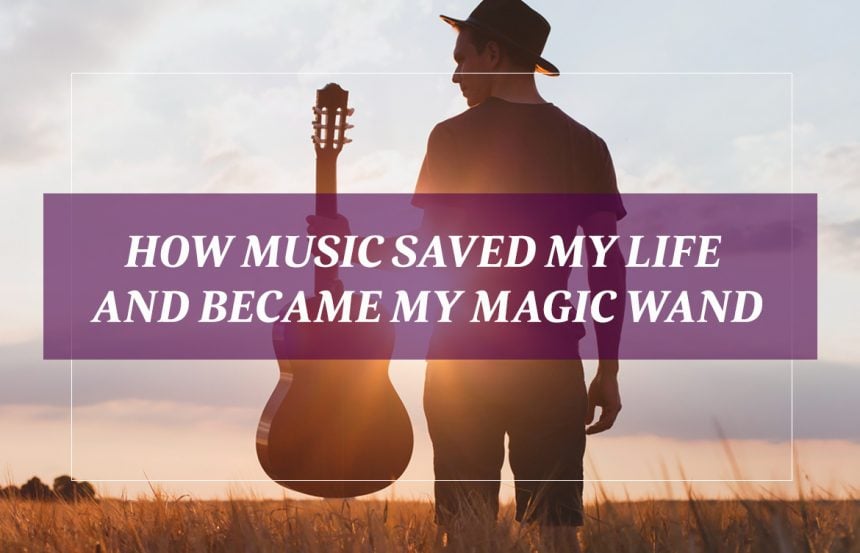 The early years of my life were filled with experiences that I don’t share except in the case where sharing may be of value for someone else.

The house where I lived was filled with anger, violence, drugs, and alcohol. My young subconscious mind was absorbing conversations and experiences, and my conscious mind was observing my environment and reacting; many times in fight or flight mode. My paradigm was being forged.

I was 11 years old the first time I ran away from home, Unfortunately, it was a cold, crisp night, and my bare feet began to blister, but fear inveigled me to keep running. Hours later, and miles away, the local police spotted me. After attempting to find out why an 11-year-old boy was outside at 11 pm, shivering, bleeding and blistered (I was too frightened to answer), they handcuffed me and put me behind bars.

Patterns like this repeated. I flunked out of classes. I began to live in a way that resembled what I learned through the repetition of influence and environment. I saw other families happy and considered that I must have been unlucky, and undeserving. My self-esteem sank low. Fortunately, music helped my mind shift away from thinking about it. Music calmed me. I loved the sound of the guitar. I would pretend to play using a broom.

At 19 I traveled 3 hours by car to see a Pink Floyd concert but got arrested before making it to the show. During my appearance before the judge, an attorney spoke on my behalf, and to my surprise, I was released to her custody and sentenced to probation and house arrest. She said to me “No kid is a bad kid, just misguided. Follow my instructions, and you can stay out of prison”. I didn’t actually believe that, but I could tell she did.

A few weeks later a friend offered to visit and bring his guitar. He showed me how to play a few chords of a song, “Rock You Like a Hurricane.” My soul ignited, and I felt a burning desire to learn to play. I believed I could learn. I had visions of performing. I got a beautiful electric guitar. I learned songs, joined a band, and played on stage. I began to write my own songs.

In 1998 Hurricane Georges flooded my studio in The Florida Keys. It destroyed my belongings and keepsakes. Feeling devastated, I embarked on a wandering vision quest (traveling thousands of miles) which ultimately took me to the mountains of Santa Cruz California. I studied and trained in wilderness survival, tracking, and developing my awareness. Soon I began teaching these skills. After four years of travel, and teaching across the USA, I arrived in Washington DC.

Two weeks later, on a sunny afternoon, my father and I were carrying groceries when a gang of boys attacked us. My intuition had warned me, but there was no immediate escape. By the time we got away, we were banged up, and my face was bleeding.

During my meditations, I focused on understanding why kids could physically assault defenseless people with grocery bags. I realized those kids had no role models, no mentors, and no initiation process to instill self-worth. I remembered my childhood, the music, the guitar. I remembered the attorney. She said, “No kid is a bad kid, only misguided.” She helped me. Now it was my turn, and my time, to use all this insight and be the change I wanted to see in the streets of Washington DC. I knew music was the universal language and it would help me bridge the cultural divide between inner-city youth and a 40-year-old well-intentioned musician.

I began teaching guitar to at-risk and foster kids, as a volunteer. I mentored them and awarded the guitars to those who showed up, practiced, and respected everyone. I realized these youth didn’t have a positive, uplifting song to play and perform. I decided to write a song for them. “The Peace Anthem (Set Me Free)” was first recorded in 2009. By 2015 more than 1,000 kids in the Washington DC area had earned their guitars. During my meditations, I envisioned weaving together many ideas that were developing in my mind, and it blossomed into a Grand Vision of musicians around the globe all playing and singing “The Peace Anthem” at the same time. I saw people dancing, singing, and communities of people all feeling the vibrations of peace and love connecting the world. The name came to me: “The Global Jam For Peace.”

My vision is to bring the world together in recurring global symphonies to raise the vibration of all the people on the planet. In a mastermind session with Jack Canfield at his home in Santa Barbara, we played guitar and talked about my vision. Jack could see it in his mind, too: Musicians around the globe all playing The Peace Anthem. He offered his support and we created a video together.

I am the founder of The Global Jam For Peace and president of Make Music Day DC. There are 800 cities in over 120 countries that will participate in our global live stream music event on Summer Solstice 2019. You can find more information, share on social media, and make a contribution here: www.globaljamforpeace.com

I am grateful to Bob Proctor, Sandy Gallagher and PGI team for the incredible education.

I have worked diligently on shifting my paradigms replacing bad habits with good habits. Using my creative intelligence and my higher mental faculties, I am achieving the goals I set in my coaching, my writing, my music, and my philanthropy. I am a dedicated teacher and forever a student.

My memoir and motion picture film in 2019. Stay Tuned!