Are You Doing This to Your Goals? 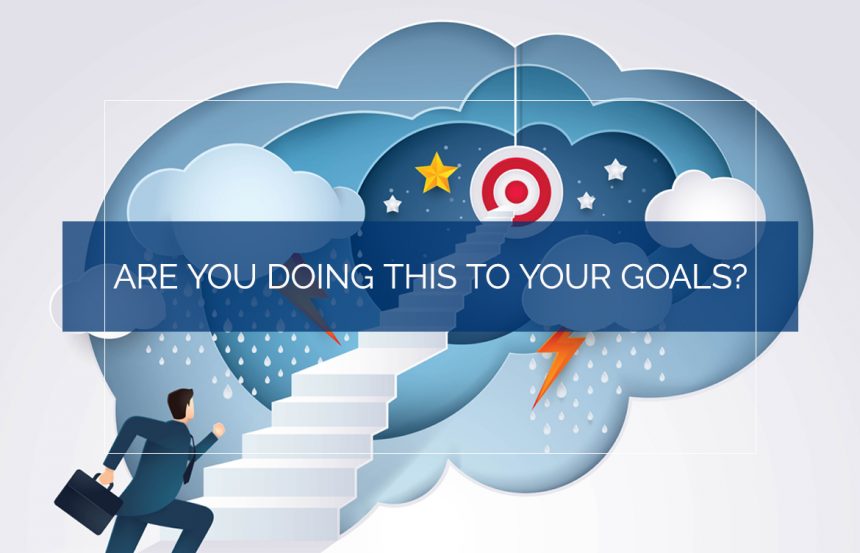 Over the past few weeks, Sandy and I have talked a lot about the questions we hear most often this time of the year—how to think about goals, set goals, act on goals and successfully achieve them.

So, I hope by now, you’ve already created a goal that really winds your stem, and you’re working your plan to reach it.

Whether your goal is something you’ve been struggling with for years or a wild dream that you want to bring to life, I know you’re ready for that goal to happen in your life. And it’s ready for you too.

Because as Victor Hugo said, “There is one thing stronger than all the armies of the world, and that is an idea whose time has come.”

When your idea is ready, no one is going to stop it from blossoming—except for possibly you.

And even though there’s absolutely NO WAY you can dream a new way of life for yourself without being personally capable of bringing that dream into reality, it won’t happen as quickly as you’d like. You must have patience with the process.

Because this isn’t just about achieving a goal—it’s about reprogramming the parts of your conscious and subconscious mind that secretly believe it can’t be done.

Patience is a virtue

As you move toward your goal, you’ll experience plateaus. You might experience a negative swing or simply a slower period when your path seems ladled in molasses.

Just understand that it is simply part of the learning process; it’s the natural rhythm and process of life.

You just have to commit to persist.

But how long will it take?

Your goal is just like a seed. And the Law of Gender decrees that all seeds have a gestation or incubation period before they manifest in form.

So, just like a physical seed planted in the ground requires a great deal of time and attention before its first sprouts poke above the earth, it takes some time and effort for your goal to become a reality.

However, the moment you consciously entertain the image of yourself in possession of your goal, you have it on the first level of creation—Intellectual form. You have created a non-physical seed.

You then plant this “seed” in the proper environment—your subconscious mind—and allow yourself to get emotionally involved with the image of your goal. Now you have your goal on the second level of creation—Spiritual form.

The moment you get emotionally involved with your goal, the image instantly and automatically begins to move into the third level of creation—Physical form.

We plant the seed in the proper environment—the fertile soil of our mind, then we fertilize it and give it the energy required for healthy growth.

We keep the seed free of life-sapping weeds. Then we patiently wait—with perfect faith and positive expectation—that the tiny microscopic seed will grow into perfect physical form.

The difference between your goal and a carrot seed

These days, farmers can tell us the gestation period for most physical seeds. But they weren’t able to do so when they FIRST planted a particular seed.

That’s what you must keep in mind when you begin to wonder how long it will take for your goal to germinate fully.

While it’s important to set a timeline for the achievement of your goal, DO allow yourself time and space for some incremental adjustments. You haven’t “planted” the seed before, so give yourself a break if your estimated germination is off a little.

What gets measured gets improved

This leads me to a reason goals fail that many people overlook: not measuring your progress and adjusting accordingly.

You must create a plan for achieving your goal and then regularly measure your progress against your plan.

If you fail to measure, you’ll never know how you’re progressing. Say, for instance, that you’ve committed to putting a certain amount of money into an investment for an increased profit over a set amount of time.

Did you write the check to purchase the investment? How is the investment going? Is it maintaining the compounding interest you first investigated? Are there other investments that are proving more solid and growth-oriented?

When you measure your results, you might have to adjust your plan and your timeline. You might even have to adjust the goal itself. Anything can be adjusted for improvement but ONLY as a result of measuring your actual progress.

A phenomenal example of this is the real-life catastrophe that occurred around the Apollo 13 mission.

Astronaut Jim Lovell first wrote about this in his book, Lost Moon. Then, it was made into a riveting movie by Director Ron Howard. The Apollo 13 mission is a classic example of goal setting, measuring, adjusting and achieving.

On April 11, 1970, the Apollo 13 mission launched with every intention of planting three astronauts on the moon, doing a bit of a walk-about, and returning the astronauts safely to Earth.

On the way there, however, the ship experienced catastrophic failure, and the goal had to be adjusted.

The moonwalk was out; the deadline had shifted… and the only goal NOW was returning the astronauts safely to earth. In the process, everything that could go wrong did go wrong.

Faced with one challenge after another, NASA had to perform measurement after incremental measurement to adjust quickly around each issue. They had to work through each roadblock, one at a time and each one required a new adjustment, also done one at a time.

And that’s what you have to do. You have to measure every step of the way and make sure that you make incremental progress every day.

Are you effectively busy?

When I work with goal-oriented people, I suggest they make a list of six things that will get them closer to their goal. Six actions daily create exponential movement forward. I can assure you.

As you implement this six-step process, you begin to develop an awareness—an edge, as it were—that enables you to automatically detect those projects in your daily life that are goal-oriented and, thus, call for immediate attention.

When you make it a habit of engaging in goal achieving activities each day, you won’t be busy just for the sake of being busy. You are effectively busy for the sake of moving closer to your goal and creating a richer, more fulfilling life.

However, the road to success is always under construction. You WILL have to make some adjustments along the way. So, measure your progress as you take each step, and expect to succeed—no matter what the odds may be.

Download the worksheet below to outline your plans for your goals. It will help you develop an execution strategy and track your progress, so you become far more effective and efficient in achieving your goals.