Is your imagination stuck on “repeat”? 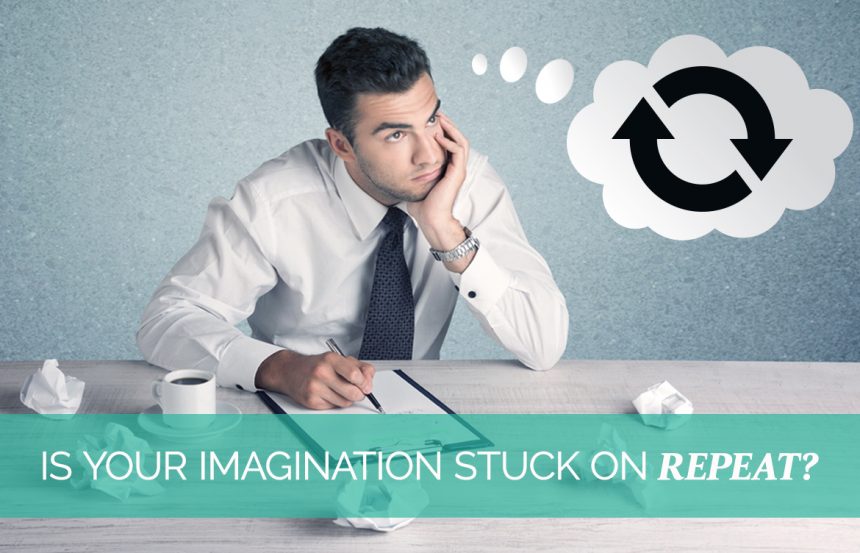 Have you ever wondered how children can sit through endless replays of their favorite television show or Disney movie? It amazes me that they’ll watch the same show every day without a single complaint or request for something new.

What’s more amazing, though, is that adults do the very same thing with their days.

The majority of men and women play “movies” in their heads day after day, relentlessly focusing on past events, most of which are unpleasant and disturbing experiences.

If they’re actually able to stop their contemplation of past events, then they allow impressions of their current surroundings and recent results to govern their thoughts. If they contemplate the future it is usually by worrying about it, or wishing that something better might come along. Then they wonder why bad things keep happening to them, or why they never rise above the issues and obstacles in their lives.

While it’s true that people are free to think anything they please, as long as they remain set in their ways, there is very little that can be done to change the unpleasant experiences that keep cropping up in their lives.

But the emphasis here is on the word “proper.” To move in this direction requires study and focused, consistent effort — with a good measure of creativity stirred in.

Just as the oak tree develops from the gene that lies within the acorn and a bird develops from the gene that lies asleep in the egg, so too will your achievements grow from the organized plans that first begin with your imagination. An image in your mind is the first stage of the creative process in life. From your imagination, your visions and plans arise.

There is a fantastic concept called “Fantasy – Theory – Fact.” The premise is that everything has its origination in the form of fantasy, which some adventurous souls dare turn into a theory and then boldly turn into fact.

It’s a process that has resulted in countless innovations and — in an intensive and highly-accelerated form — is exactly what we guide our Matrixx participants through. Over the course of six amazing days, their minds do some phenomenal imaginative AND practical work, moving them into the “fact” phase with lightning speed.

You can use this same idea to let your mind play, starting today. Fantasize a much better life than you presently enjoy. Draft your future with imagination, ponder and calculate with intelligence and awareness, and knit it carefully. Then devise paths and find tools to help get you there.

And if you really want to hit the gas pedal on the process, click here to find out more about Matrixx!