Better to Ask than Assume 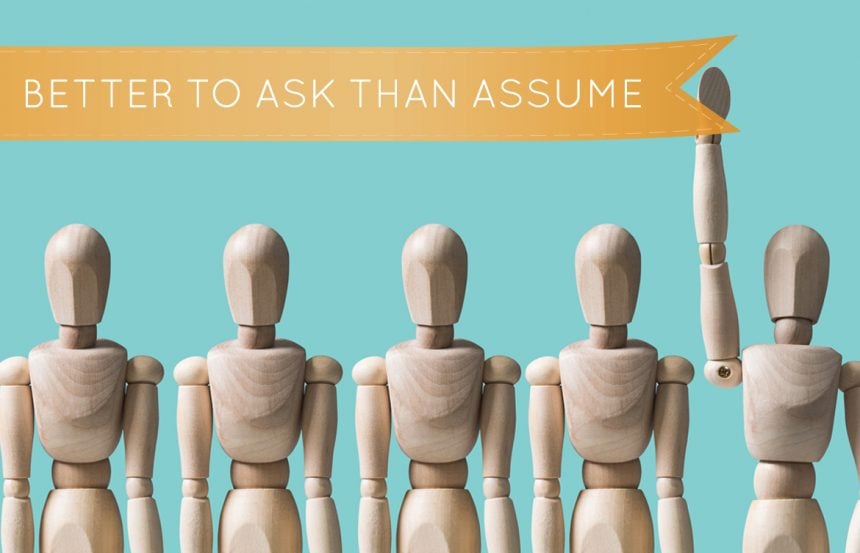 The late Bill Love used to tell the story of a psychiatrist, engineer, and doctor who got lost in the Canadian woods. Stumbling on a trapper’s cabin but getting no response at the door, they went inside for shelter and waited for his return.

In the corner, on a crude platform at waist-high level, was a wood-burning stove. It quickly became not only the focus of interest for their half-frozen bodies but the center of their conversation as well.

The psychiatrist explained the stove’s unusual position as evidence of psychological problems brought on by isolation. The engineer, on the other hand, saw it as an ingenious form of forced-air heating. The physician surmised the poor fellow had arthritis and found it too painful to bend over to fuel his stove.

When the trapper finally arrived, they could not resist asking about the stove whose warmth had saved them. “Simple,” he said. “My stove pipe was too short.”

I wasn’t along for that hunting trip, but I’ve been where those guys were that day. I’ve tried to read someone’s mind. I’ve seen motives that weren’t there. I’ve walked into situations, caught a snippet of what was happening, and made a fool of myself by some badly chosen response. Or I’ve used a perfectly innocent slip of the tongue as my excuse to take offense. I can be a real jerk at times!

On occasion, the victim has been a stranger. At other times, it was a friend from church or colleague at work. Most often, it has been my wife or child.

Communication is a wonderful thing – when it happens. But there are so many barriers. Each of us brings baggage to every situation. Words can be vague or carry very different nuances for people from different backgrounds. Then there are the prejudices and blind spots all of us have.

Lots of confusion could be eliminated and far more progress made this week by following this simple rule: When something isn’t clear, ask. Don’t assume. Don’t guess. Don’t mind-read. Try swallowing your pride and say, “I’m not sure I understand. Do you mind explaining that to me?”

This simple strategy could save you embarrassment, time, and money. More important still, it might save one of your life’s most important relationships.

Rubel Shelly is a Preacher and Professor of Religion and Philosophy located in Rochester Hills, Michigan. In addition to church and academic responsibilities, he has worked actively with such community projects as Habitat for Humanity, American Red Cross, From Nashville With Love, Metro (Nashville) Public Schools, Faith Family Medical Clinic, and Operation Andrew Ministries.