The One, Short Audio Lesson That Earned Me $200 Million 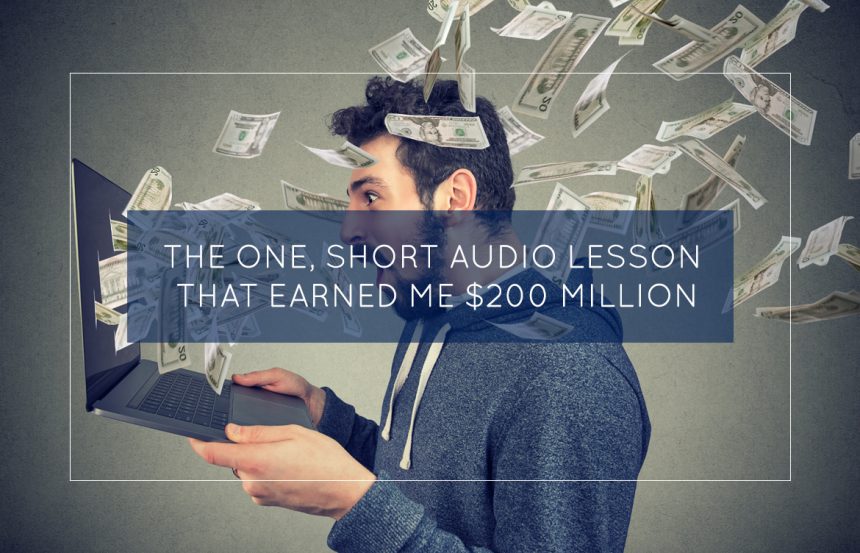 Last year, I was at Bob Proctor’s Paradigm Shift seminar and my life was absolutely rocking.

Over the last several years I had become a devoted student of Bob’s because … well … I did everything he told me to do and it all worked! Initially, I found this quite a shocking surprise but, over time, I came to depend on it.

At the Paradigm Shift, he told us to get involved in The New Lead the Field Program … so, I did because … that’s just what you do when Bob asks you to do something. Every day, as I listened to these 30 minute audio lessons from Bob and Earl Nightingale, I could feel my awareness change. It was all just clicking into place.

The Magic of the “C Power”

Several months prior, I had started teaching Bob Proctor’s precepts to my company’s sales and support staff. I head up the team that manages corporate retirement plans (401k/profit sharing plans). We were having a banner year, even topping our annual 40% growth rate. I could have been perfectly happy in that place … but I had just learned about “C” Goals.

Bob had explained the difference between “A,” “B,” and “C” goals in his seminars, but it all really hit home for me as he explained it in greater detail in one of the program’s audio lessons. A “C” goal is like the impossible dream – it’s so far out of your comfort zone, you can’t even begin to imagine how you’re going to reach it … but it’s the “C” goal that really makes life worth living.

So, in September, I pulled my team together and told them it was time we came up with a “C” goal that we could all work toward in our final, 4th quarter of 2017.

As they began to discuss what a “C” goal would be, the energy in the room just kept rising.

I already had a number in my head, but this had to be a group buy-in, so I kept my mouth zipped. Then, one of my guys said exactly the same number I had in my head … “We brought in $220 million in 2016,” he said. “Let’s bring that much in for just our 4th quarter.”

For a brief moment, you could hear a pin drop in that room. $220 million in a single quarter? Another member of my team said, “How in the world are we going to do THAT?”

“We don’t have to know how,” I said. “We just have to make the decision we’re going to do it.”

We Made the Decision.

And, it came down to the very last week in December … where we finished the quarter right at the $220 million mark. Even bigger than seeing the monetary result of that “C” goal was seeing the magic that unfolded once we had made the decision. I kid you not – stuff just started dropping out of the sky.

That very moment we made that decision, our collective brains had flipped over to a new vibration; we were operating at a higher frequency. And, when you land in that illogical space, a creative, imaginative excitement takes you over. You’re co-creating with something really big, and – believe me – this is where you deserve to live.

A Partner of one of the top independent wealth management companies in America, Creative Planning Services in Kasnas City, Robert Pascuzzi is also a prosperity speaker and author. Find his newest book, Get Tough – Retire Rich at RobertPascuzzi.com The New Lead the Field Program is the most succinct – and extensive – compilation of advice and lessons from the world’s legendary masters, Earl Nightingale and Bob Proctor, with online community, live Q-and-A webinars with Bob Proctor and more. See Bob Proctor’s video and learn more at: LeadTheFieldProgram.com