The Law of the Garbage Truck! 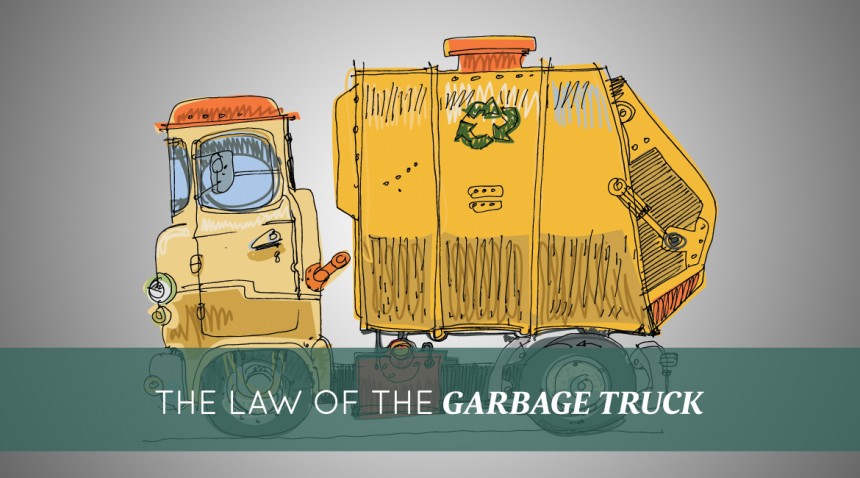 How often do you let other people’s nonsense change your mood? Do you let a bad driver, rude waiter, curt boss, or an insensitive employee ruin your day? Unless you’re the Terminator, you’re probably set back on your heels. However, the mark of your success is how quickly you can refocus on what’s important in your life.

Sixteen years ago I learned this lesson. And I learned it in the back of a New York City taxi cab. Here’s what happened.

I hopped in a taxi, and we took off for Grand Central Station. We were driving in the right lane when all of a sudden, a black car jumped out of a parking space right in front of us. My taxi driver slammed on his brakes, the car skidded, the tires squealed, and at the very last moment our car stopped just one inch from the other car’s back-end.

But then here’s what really blew me away. My taxi driver just smiled and waved at the guy. And I mean, he was friendly. So, I said, “Why did you just do that!? This guy could have killed us!” And this is when my taxi driver told me what I now call, “The Law of the Garbage Truck®.” He said:

“Many people are like garbage trucks. They run around full of garbage, full of frustration, full of anger, and full of disappointment. As their garbage piles up, they look for a place to dump it. And if you let them, they’ll dump it on you. So when someone wants to dump on you, don’t take it personally. Just smile, wave, wish them well, and move on. Believe me. You’ll be happier.”

I began to see Garbage Trucks. Like in the movie “The Sixth Sense,” the little boy said, “I see Dead People.” Well now “I see Garbage Trucks.” I see the load they’re carrying. I see them coming to dump it. And like my taxi driver, I don’t take it personally; I just smile, wave, wish them well, and I move on.

One of my favorite football players of all time was Walter Payton. Every day on the football field, after being tackled, he would jump up as quickly as he hit the ground. He never dwelled on a hit. Payton was ready to make the next play his best. Over the years the best players from around the world in every sport have played this way: Muhammad Ali, Nadia Comaneci, Bjorn Borg, Chris Evert, Michael Jordan, Jackie Robinson, and Pele are just some of those players. And the most inspiring leaders have lived this way: Nelson Mandela, Mother Theresa, Gandhi, and Martin Luther King.

See, Roy Baumeister, a psychology researcher from Florida State University, found in his extensive research that you remember bad things more often than good things in your life. You store the bad memories more easily, and you recall them more frequently.

So the odds are against you when a Garbage Truck comes your way. But when you follow The Law of the Garbage Truck®, you take back control of your life. You make room for the good by letting go of the bad.

The bottom line is that successful people do not let Garbage Trucks take over their lives.

What about you? What would happen in your life, starting today, if you let more garbage trucks pass you by?

Here’s my bet: You’ll be happier.

Reprinted with permission from the author, Copyright David J. Pollay. You can find the original story by clicking here.