Why Being Illogical is a Good Thing 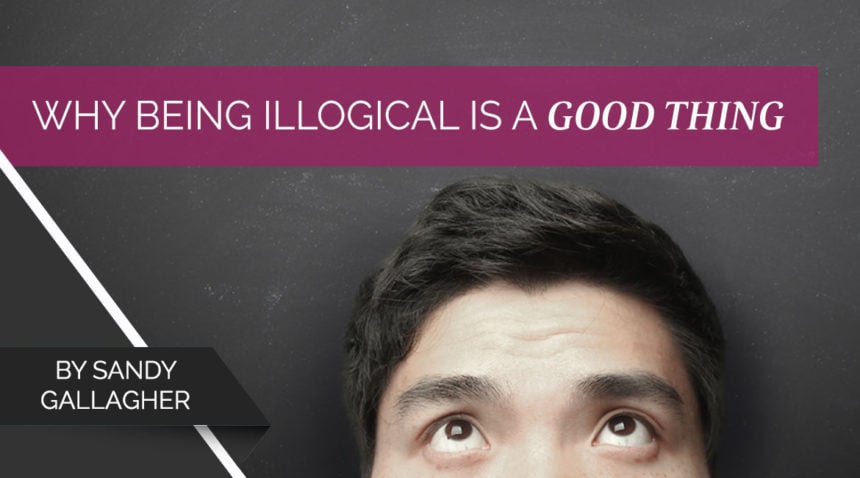 How much do you plan to improve this year?

Most people expect a gradual improvement in their performance and to receive a 2-10 percent increase in their pay or income as a result.

However, in You2, Price Pritchett indicates that you don’t have to settle for systematic improvements where you move from one level of achievement to the next.

He says you can make an “explosive jump” in your performance that puts you far beyond the next logical step.

The question is, how do you do it?

So, when I wanted to change careers from being a banking attorney to working in the personal development industry, I adopted the following outlandish mantra…

That was a crazy thing for me to do back then because I had been the poster child for logic all my life. You don’t get straight A’s all the way through school … graduate as the top law student in the country… or close $100 Billion in deals by being illogical.

I had succeeded at everything I had ever done in life. So, it should have been easy for me to figure out to change careers.

Well, it wasn’t. It was the most terrifying thing I had ever tried to do.

However, through Bob’s teachings and other daily studies, I discovered that if I was going to make the change that I so desperately wanted, I was going to have to learn to think illogically.

Because our paradigm dictates our logic.

Our logic controls our habitual behavior.

And our behavior produces our results.

So, if you or I want to be, do, or have something that is entirely different, we must do things that are outside of the box we have built for ourselves. We need a strategy that is based on uncommon sense.

I’ll illustrate what I mean by using Bob Proctor’s life as an example.

Although he had no idea what he was doing at the time, Bob started doing the illogical in 1961. That’s when he started reading Think and Grow Rich every single day. In that first year, he read the book several times.

We’ve been programmed to read a book once and then move on. So, it doesn’t make any sense to read a book a 2nd, 3rd, or 10th time—back to back to back. I think anyone would agree that’s a rather bizarre thing to do.

Yet, that’s precisely what changed Bob’s habitual thoughts, which changed his daily routines and that changed his results dramatically. He went from earning $4,000 to $175,000 in just a year, and then quickly took his income to over $1 Million.

If Bob had read Think and Grow Rich only once, as most people do, little, if anything, would have changed in his life.

And then there’s my experience…

In August 2006, I barely knew who Bob Proctor was, and I had zero interest in doing anything other than continuing to practice law and run my law firm.

Yet, less than three years later, I had not only created a transformational corporate training program with Bob, but I had closed my law practice and become the co-founder and CEO of Proctor Gallagher Institute.

It’s not logical to believe that I’d be in this position right now.

But it happened anyway.

The question you should ask yourself is if Bob and I are any different from you?

You may not want to reinvent yourself like Bob and I did. But, because you’re taking the time to read this, there’s a good chance you want to make some changes in your life that will require a paradigm shift.

How can you do it?

Your paradigm controls your behavior, and that action produces your results.

Every result that you get in life is either positive or negative.

With those two things in mind, take these five steps to start getting the results you want:

1. Look at the results you are getting in the various areas of your life, and pick one that you want to improve or eliminate.

2. Write down the situation the way it currently is. Understand that what you’ve written down is a graphic or written description of an idea that is fixed in your subconscious mind.

“My sales go up and down. I get ahead of my quota, and then I fall behind.”

3. Get a clean sheet of paper and write out the positive side of it, which is the result you want. First, write “I’m so happy and grateful now that…” and then complete the sentence in the present tense.

In this example, you might write the following to describe the way you’d like for your sales to be:

“I am so happy and grateful now that quality leads flow to me on a continuous basis. My sales are always increasing, and they get better every day.”

4. Take the first sheet, the one with the current, unwanted results and literally burn it. That’s your habitual way of looking at sales, and you don’t want to do that anymore. Burning the paper is a symbolic way of letting the idea go.

5. Here’s the part that is illogical…

And, just like you did with your life script a couple of weeks ago, record the statement that describes what you want, repeating it over and over and over. Then, listen to the recording a few times each day while feeling as if it has already happened.

Being aware of this five-step process is wonderful. But you can’t just read or talk about it. You’ve got to do it.

Writing your statement dozens of times a day and listening to it repeatedly, might seem silly or unnecessary. But it’s critical that you do it anyway.

At first, you won’t believe the statement as you write it or listen to it. But after a while, it won’t seem so silly anymore, and you’ll even start to believe it. In other words, it will become logical, and you’ll start to act on it.

What’s happening is the repetition of the new idea allows it to take root in the subconscious mind eventually. As it gains strength, the negative idea that is already planted there becomes weaker. Soon the new idea takes over and begins to control your behavior, and the other one loses control. And then, like Bob and me (and countless others), you’ll start to create the desired result.

Get in the habit of doing the illogical whenever you’re unhappy with the results you’re creating in life. I promise it will get you on the right track of getting what you want sooner rather than later.

P.S. If you’ve ever experienced a transformation, tell us about it below. Sharing what you did to change your results can make a big difference in someone else’s life.