THE GIFT OF GIVING: WHY I HAVE BEEN CALLED TO SERVE – The story of an unstoppable woman! 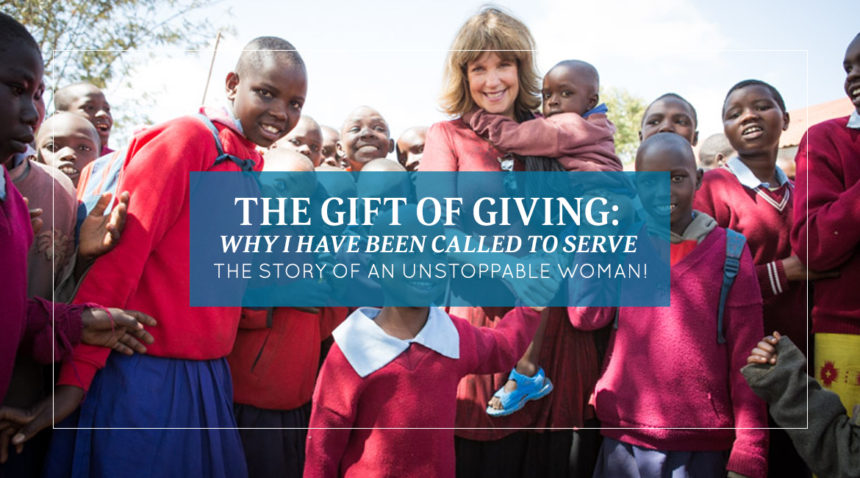 Who knew that when my husband of 20 years and I separated in December 1999, my pain would open the door to my greatest purpose?

Before the separation, we had planned on spending the holidays with my parents in Florida. Now my son and I were going alone. I felt devastated and overwhelmed, but somehow in the midst of my pain, I made a promise to myself that the next Christmas would not find me at my parents’ house feeling sorry for myself. I would instead dedicate myself to doing something for someone else.

As soon as I got home, I called my mentor and friend Millard Fuller, the founder of Habitat for Humanity International, asking him for advice. I met him while interviewing him for my first book, Unstoppable. He said “Cynthia, when you have a great pain in your life, you need a greater purpose.” He told me about his recent visit to Nepal, one of the poorest nations in the world, and suggested that building a house for a Nepalese family in need could be a great project for me.

As I sat with his suggestion, I thought, ‘How many houses would I need to build that would be bigger than this pain in my life?’ Even though I had never built one house in my life, it wasn’t until I got to the number “100 houses” that felt bigger than my pain.

That was a CRAZY audacious goal in which I had NO IDEA how I would make it happen! Each house would cost $2,000. I was a single mom, living on a $14.95 book. I had no big community of potential donors to draw from and didn’t even know exactly where Nepal was! But I had a purpose that was bigger than my pain and was invigorated by my newfound project. Plus I was grateful to have something to take my mind off of myself and my problems.

Throughout that year while grieving the loss of my marriage, there were times when I felt so depressed that I didn’t even want to get out of bed. At that moment, I’d think about the Nepalese families who didn’t even have a decent place to sleep at night. That thought got me up and moving forward.

One year after separating from my husband and subsequent phone call to Millard, I had raised my goal of $200,000 simply by asking everyone I came in contact with to donate. I brought a team of 18 people to Nepal over the New Year’s holiday and we built the first three of the 100 houses that would subsequently be built over the following year.

I’ll never forget the connection I formed with one of the women receiving a home that we funded. Chandra was also a single woman supporting seven family members including her parents, brothers and sisters. They all lived together in a tiny one-bedroom shack.

Even though we didn’t speak the same language, our hearts were connected. It was the first time I had really experienced the transformational power of giving. When I started this project, I thought I was doing something great for these families. What I hadn’t expected was how this project would change my life!

I also experienced something else first hand — the Law of Giving and Receiving. Unexpectedly, that year I earned more money speaking and selling my $14.95 book, than I had earned in a very successful corporate sales career earning a six-figure income. I was starting to understand the spiritual axiom, “Give, and it shall be given unto you.”

In 2005, my 2nd book, “Unstoppable Women”, came out and I was looking for my next philanthropic project. I received an invitation “out of the blue” to attend the first ever Rural African Women’s Conference. The only thing I knew about this conference was that women from rural Kenya were going to meet with us and share their story. While my schedule was full, I knew I needed to say yes. So I booked my flight and flew half way around the world.

The first day of the conference, I walked into the auditorium and there were 400 women from rural Kenya waiting to take the stage. I found out later that many of the women had never left their small village before in their life and yet they had walked miles, many of them days, to meet with me and the 40 other mzungas – which means white people.

Over the next 5 days, each woman stood up and through an interpreter told their heart-wrenching story. And their greatest hope and the greatest concern, was, “How can we get our children an education? Because without it, “nothing will ever change”. These women weren’t there to complain. They were looking for solutions to create a better life for their children and their families.

And as I listened to these women, I first felt sad and great compassion for things they had to endure that I couldn’t even imagine. Then I started to feel outrage that simply by virtue of where they were born meant they’d have to live a life of back-breaking poverty, with little way out.

A voice in my head as clear as a bell said, “Cynthia, you’ve got to do something about this!” And immediately, I heard another even louder voice that said, “This problem is so big and has been going on for so long. What difference could you really make?” Feeling overwhelmed, I decided to ignore both voices and just be present to the experience I was having.

Five days later, it was time to get back on that bus. As we were saying our goodbye’s, I’m hugging these women who I have since fallen in love with and they were pleading with me about something and I don’t understand. And I turned to my interpreter and asked “what are they saying”? And my interpreter told me, they’re saying please don’t forget us.

Something welled up inside of me and I couldn’t ignore their pleas, and I promised them that I would do something to help you.

So now I’m back in the bus for 12 hours, but this time my mind was racing with the question of “what am I going to do about this? … Cynthia, you made this promise, where do I even start?”

I got an idea! I was turning 50 in a few months and I would turn that birthday into something meaningful by having a party and turning it into a fundraiser.

We booked the Shanghai Reds Restaurant in Marina Del Rey, California and I invited all of my friends to attend. But I gave them a specific request. Instead of giving me a present, I wanted their help to give children in East Africa a present — the gift of an education.

One hundred people attended and it was standing room only. And something happened that I hadn’t anticipated. People were coming up and thanking me! It wasn’t the typical “thank you for having a great party”. They were thanking me for giving them the opportunity to make a difference — to be able to contribute to something that would forever change the lives of hundreds of children around the world.

That night we raised $80,000. I thought, if I could do this in one night, what could I do if I really put my time and energy into it.

It was at that moment that I knew what I could to do to keep my promise to these women in a much bigger way. I started the Unstoppable Foundation and I got serious. I did some research and I discovered something that shocked me.

There were too many well-intended organizations building schools in developing countries. But unfortunately many of those schools were sitting empty.

Why were they empty?

Because you can build a school, but if girls don’t have access to clean water, they’re spending hours every day fetching water and aren’t able to attend school.

YOU CAN BUILD A SCHOOL …

You can build a school … But If children don’t have nutritious food, they’re HUNGRY AND MALNOURISHED.

You can build a school … but if the parents can’t generate an income, how can the project sustain itself? It can’t!

I had an epiphany.

If this is going to work, we don’t just need a school.

We need to also provide the kids with access to 2. Clean water, 3. Healthcare, 4. Nutritious food, 5 training for the parents to earn an income so the entire project is self sustaining.

That became my marching orders to find an organization that would be able to implement all 5 pillars. I was fortunate to find a partner on the ground in Kenya, We Charities, who was implementing all 5 of these services. As a result of that partnership, the Unstoppable Foundation created a program called Sponsor a Village

It’s not charity in the traditional sense. It’s empowerment!

So I began asking people to join me in this vision. And what I discovered is that people really care. They care about others…whether they’re in their own communities or half way around the world.

And the results have been amazing.

Because of our generous supporters, we have educated over 30,000 children and impacted over 50,000 men, women and children in the Maasai Mara alone with our 5-pillar model and have now expanded to India.

Entire communities are now thriving with the tools to lift themselves out of poverty.

I would never have imagined that the choice I made in 1999 to find a purpose that was bigger than my pain would have been the doorway to a whole new life that would shape my destiny forever.

It’s brought me indescribable joy, meaning and satisfaction. And the joy of working with friends like Bob Proctor, Sandy Gallagher, and other generous supporters on this mission is the greatest gift of all.

As my mentor, Millard Fuller always said, “I feel like the richest person on the planet”.

The Proctor Gallagher Institute is a big supporter of the Unstoppable Foundation. Our company is 100% behind their work and their mission to ensure every child receives a quality education. Make a difference by going to: www.myunstoppablechallenge.org/bobandsandy

The next Unstoppable GALA will be held on Saturday, March 21, 2020 at the Beverly Hilton in Beverly Hills, CA. You can get tickets at: www.unstoppablegala.org when they become available.