What Is Your Plan? 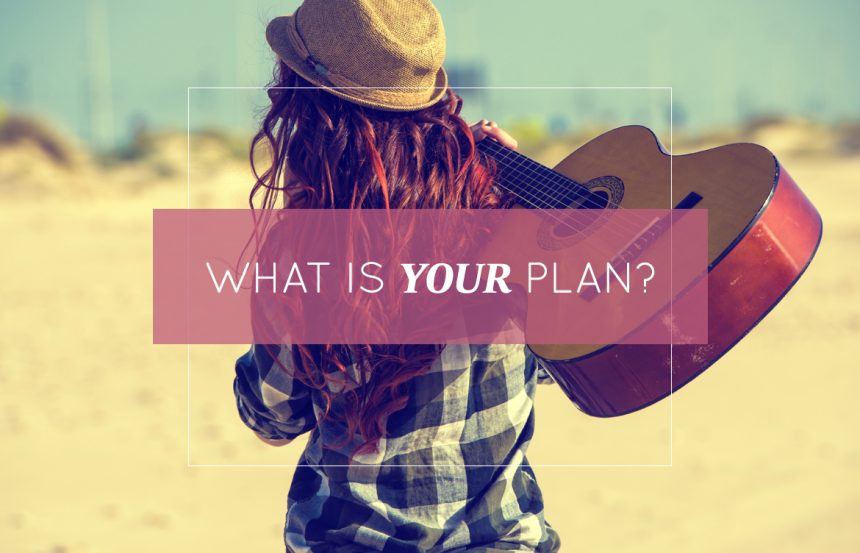 This is the story of a girl who knew her Plan A from the time she was a little girl, took a major detour, and came full circle 20 years later, and I’m here to tell you, it’s never too late!

I was raised in a middle class home by wonderful parents who both came from very poor families. They worked very hard to provide a home and a life for my sister and me that would be much different than what they experienced growing up. We weren’t well off, but we had everything we needed.

I was a musical kid from the time I was born. My whole existence was defined by music and I was very involved in it in school from 4th grade on. When I graduated from high school outside of Baltimore, MD, I decided to venture off and move 700 miles away from home to attend Belmont University, a very well known music school in Nashville, TN where I had received an academic scholarship. My natural inclination was to major in music and become a recording artist. Belmont was known for attracting the caliber of talent that generated star power. All you have to do is look at some of the talent I graduated with: Trisha Yearwood, LeAnn Womack, band members of Little Texas, and the list goes on. But my parents encouraged me to major in Music Business instead as that was the more practical choice that would assure me a steady job with benefits and 401K. I thought this sounded like a sensible plan, a plan for which I was not suited.

Fast-forward 20 years later, I am 14 years into a career in journalism with the largest newspaper company in the world, Gannett. I was living my Plan B, benefits and 401K in tow, and I felt like a round peg trying to fit into a square hole, and inside, the musically creative me was dying, until one day at work, I got a wake up call.

During a staff meeting with a new editor, we were asked to share something about ourselves with our co-workers that they may not know. Racking my brain, I thought, “What can I share that my colleagues of all these years don’t know about me?” When it came my turn, I told my co-workers that I played seven different instruments. All of them were surprised, and one of them told me they didn’t even realize that I was musical. This was like a knife to my chest. Here I was, the kid that had been defined by music my entire life, the one very obvious God-given talent I possessed, and I had shelved it. How could they not know that’s who I AM? I KNEW right then and there I had to make a change.

I started writing songs and playing writers nights here in Nashville, all the while, still working my full-time day job which I was TERRIFIED to leave because it was “safe.” What’s worse, the music industry is a “young “ person’s playground. Record labels don’t sign people in their 30s or 40s, especially women, so no sense in quitting my day job. But that was okay with me. I had resigned myself to being the best songwriter I could be. “I don’t have to be an artist,” I told myself. “Someone else can sing my songs.” But the artist inside of me kept tapping on the shoulder of my heart, reminding me that God gave me a voice and my own unique artistry for a reason.

In the meantime, I had been searching for a deeper sense of self-worth, self-love and self-esteem. I had been introduced by my sister to some authors and teachers of the law of attraction. I was seeking out a life that was more in line with spirit and looking for mentors in line with this new way of thinking. I started studying and reading everything I could get my eyes and ears on, and I was starting to gain a new perspective on things, on how I had lived my life up to that point and why I was living my Plan B. I realized I had a pretty unhealthy perspective that needed to change if I wanted break the ties that bound me.

I eventually found the nerve to trade in my day job for work in the world of promotional modeling. This would allow me the time flexibility, being an independent contractor, to pursue recording my first album, a pop-country album… so I thought. It was scary, outside my comfort zone, and sometimes I barely made ends meet, but I was on the path to Plan A, FINALLY!

In the winter of 2012, I co-wrote a Christmas song for my mom and dad. My dad was in poor health and I wanted to give him something very special for Christmas: a song reminiscent of the big band era he so loved. This was a big part of the music I grew up on and I had a very close connection with it. Unfortunately my father passed away right before Christmas that year and didn’t get to hear the song I wrote for him, at least not in his human form.

The following year, I did a crowd funding campaign and raised $36,000 to record an “all-original,” 1940s-style, big band Christmas album in honor of my father.

These days, I wake up every morning and write about, read out loud and visualize my goals for my music and my life. One of the things I wrote about and visualized, was my mentor, Bob Proctor, putting his ears to my Christmas album. Well, God works like magic when we come to Him repetitively asking and believing, and Bob not only got a hold of my album, but he loved it, and said he would like for everyone to have it, just in time for Christmas.

LaLa Deaton is a Nashville singer/songwriter and artist. You can purchase Picture Perfect Christmas at www.laladeaton.com/music