Earning Money is a Habit 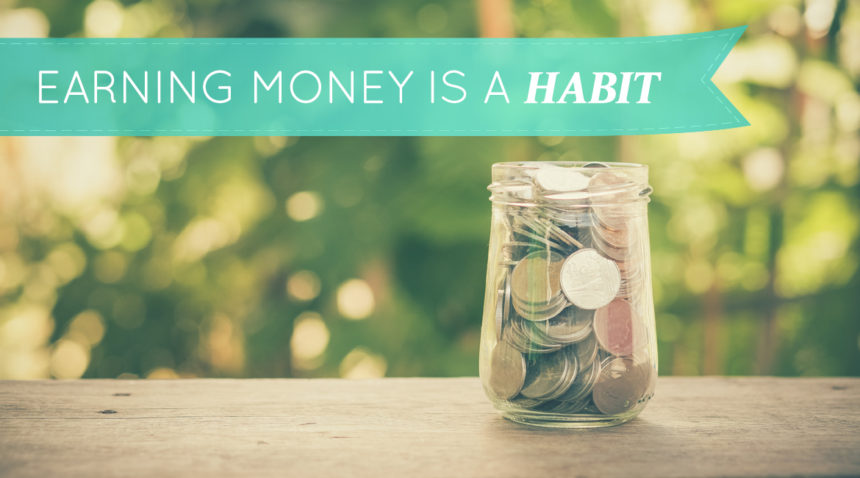 Recently my husband and I took a mini-vacation trip to Los Angeles. The charming ocean-side boutique hotel where we stayed turned out to be a great place to invest some relaxing time together.

The first morning, we jumped out of bed and headed out the door for a walk on the beach. After a while, we decided to take a rest and enjoy the view, so we looked for a place to sit and watch the waves. The closest bench was dirty, covered with dew and sand. Since neither of us wanted to get our pants messed up, we decided to find a cleaner place to sit. Just then, a homeless man standing nearby had been observing us. He quickly pulled off his shirt and used it to wipe off the bench for us. “There you go. Clean as new,” he said, motioning for us to sit with one hand while balling up his now-dirty shirt with the other. Surprised by his kind gesture, we thanked him and sat down as he retreated to his small pile of worldly possessions— a bicycle, a bucket, a blanket and a duffel bag. I decided to give him some money as a way to thank him, but I didn’t want to offend him even though it was pretty obvious the guy could use some cash. Honestly, his selfless act of kindness so intrigued me that I wanted to know more about him, to hear his story.

Approaching him, I introduced myself, “I’m Peggy, what’s your name?” I asked, handing him a few folded bills.

“Thank you,” he said appreciatively, accepting the cash with a smile, “I’m Robert.”

“We are very grateful for your kind gesture Robert.”

Robert immediately started to share how he ended up living in the streets. He was open and honest and seemed like he wanted someone to talk to.

“How I ended up living in the streets is a long story, but in a nutshell, I followed my wife to LA from Virginia, but she left me. Since then, I’ve lost everything. Frankly, I don’t have much of anything anymore. I’ve hit rock bottom.”

“Well, you certainly are a kind and giving person Robert.”

“Perhaps not right now, but that’s temporary. Money is easy to earn and attract with the right mindset. When you find ways of giving or bringing value to the world you will be compensated. You already know this because you just demonstrated that to me and my husband.”

“You’re right,” he said, reflecting for a moment, “I do know this.”

“Now would be a good time to take Winston Churchill’s advice.”

I replied with one of my favorite Winston Churchill quotes, “When you’re in a hole, stop digging.”

“There are always ways to earn money. One time a guy knocked on our door carrying a bucket, a telescoping squeegee and a ladder. He asked to clean all the windows on my house for $80. This was a big job that I normally paid over $400 to have done, so I decided to give him a chance. The only thing he needed from me was my garden hose and water. When he finished, I had spotless windows and he had cash.”

My eyes met Robert’s, and then I looked down at his things. Before saying goodbye, I pointed out that he had the tools to do the same thing. “All you need to do now is take the first step.” I grabbed the bucket and handed it to him.

For more than 30 years, I have mentored many people in their personal and business lives. In that time, I have observed that lack of money is a problem for many people. Most commonly, they don’t recognize that money is just energy – that’s why it’s called currency, just like electricity. And it can be as easy to attract with the right relationship with it. When you walk into a dark room, you don’t ask why the lights come on when you flip the switch, you just know they will. Money works in much the same way.

However, there is an art to earning money, and I am always working on mastering it. And like I helped Robert, I am committed to helping others understand it too. I’ve always loved earning money. At 8, I earned my first paycheck by helping my father in a convenience store that he managed. At 11, I got a part time job stuffing envelopes for a direct mailing company. In both cases, I loved receiving an envelope stuffed with money at the end of the week. Later, at 15, I got a job working along side my mother in a grocery store. Then after graduating high school, I kept that job and started a second one, working in my township’s tax department. Since that time, I have gotten better at earning money – a lot better – and now I do it easily and effortlessly. I’ve made earning money a habit, and I am committed to helping as many other people do the same.

Peggy McColl is a New York Times Best Selling Author of 12 books. She offers a free Morning Money Class series. Every day, a short video (generally 3-5 minutes long) is delivered to your inbox with some of the most valuable money tips free of charge. To receive a free daily email video lesson about simple ways to attract more money into your life, sign up at http://morningmoneyclass.com