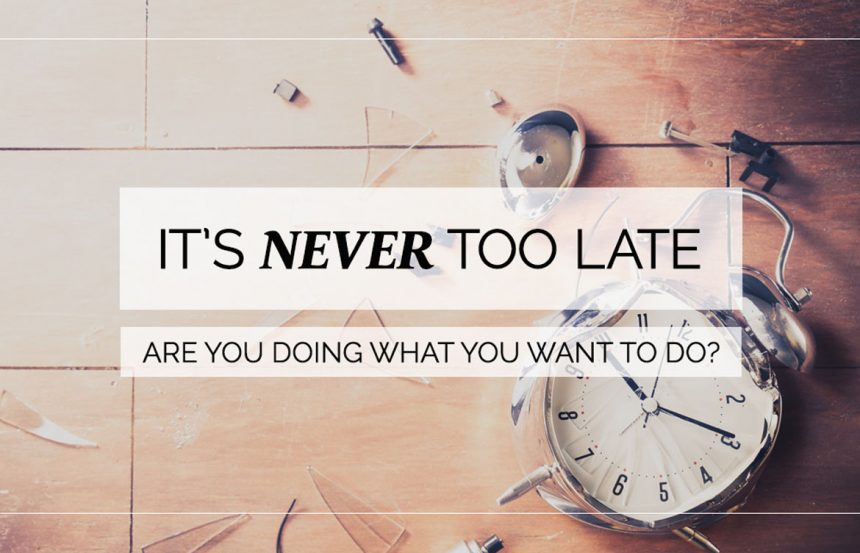 I recently read a great little book called How We Lead Matters by George Elliot.

In this book, Elliot said, “It is never too late to be what we might have been.”

All too often, we pass a certain age and become resigned to the fact that the window for writing the Great American Novel, achieving entertainment success, or starting our ideal business has closed.

However, your success is not bound by age. Many people have achieved fantastic dreams in their 40s, 50s, 60s and beyond.

And now that we are living longer, it’s happening more and more.

No one expected much of her when she stepped onto the stage of the television program “Britain’s Got Talent.” And when Susan Boyle announced that her dream was to become a professional singer and be as successful as Elaine Paige, people laughed.

But then she began to sing a rendition of Les Miserables’ “I Dreamed a Dream” that brought the audience and the judges to their feet.

One of the most extraordinary things about Susan is that, at age 47, she had never sung professionally before. Yet her voice was breathtaking.

Susan grew up enduring intense bullying. She went on to work a kitchen job and take care of her parents after graduating. While she had always loved music and wanted to pursue it as a career, her familial duties held her back.

Well, Susan made it to the final round of “Britain’s Got Talent” in 2009. Shortly after that, she landed a record deal and reportedly had the largest ever sales debut for a female artist and eventually broke global sales records.

And in December 2009, Susan fulfilled her dream of singing with her musical idol, Elaine Page.

In 1954, Ray Croc started McDonald’s when most people his age were retiring.

At 52 years old, he was a milkshake machine salesman. One day he came across a hamburger stand in San Bernardino, California.

Instead of selling the McDonald brothers his machine, Ray bought the business and became a pioneer in the fast-food industry.

In 1960, he had more than 200 McDonald franchises in the U.S., but he barely earned a profit. However, rather than giving up, he started the Franchise Realty Corporation to buy property and lease it to franchisees.

Ray began advertising to support the franchises using the profits from his real estate deals. And, in the 1970s, he expanded his business across the globe.

When it was all said and done, Ray had accumulated $500 million dollars in assets.

At age 18, Mother Teresa was influenced by her pious and altruistic mother to become a nun. She taught at a girls’ school in Calcutta for years, becoming the school’s principal in 1944.

However, on a trip from Calcutta to the Himalayan foothills in 1948, Mother Teresa had an epiphany…

She said that Christ spoke to her on that journey, imploring her to work with Calcutta’s sick and poor children.

Mother Teresa listened, and in 1950 at the age of 40, she left everything she knew behind and established the “Missionaries of Charity” organization.

Founded by only 12 members, it eventually became a worldwide organization and led to Mother Teresa receiving the Nobel Peace Prize in 1979 at age 69.

It’s never too late to be extraordinary

Susan Boyle had a vision, and against all odds, she achieved it in her late 40s.

In his 50s, Ray Croc never gave up on his business and he accumulated hundreds of millions of dollars.

And at 40, Mother Teresa followed her calling instead of sticking with what she knew.

I hope something in one or more of their stores will inspire you to become what you might have been. People around the world are reinventing themselves at age 50 and beyond, turning their latent seeds of ideas into a garden of dreams.

And if you’re already doing what you want to do, but you’re not getting the results you want, with an adjustment in attitude, you can turn things around.

You see, many people say that work gives people dignity. Well, that is only half the equation.

The other half that we don’t hear nearly enough is that people give work dignity.

I have met waiters who are more inspired about how they do their job than some executives who seem to have lost their drive for excellence. Waiters who create value for others by caring about their customers and going out of their way to make them feel good.

Setting a higher standard and approaching your work with originality is more challenging—and rewarding—than simply achieving the status quo. When you shift your attitude in a positive direction, your entire life shifts in that direction.

If you’re not happy with your current results, keep in mind that the more value you create in your work or your interactions with others—the more value will eventually flow toward you. Faithfully doing your best, independent of the support, acknowledgment, or reward of others, is a key determination in a fulfilling life and career.

Sit down and reflect on the last few years of your life and think of the things you were going to do and you passed it up.

Ask yourself, “What about that? Could I really do that?”

And then bring more of yourself to the surface and apply yourself to what you are doing or what you want to do.

It truly is never too late to be what you might have been—no matter how old you are or what your situation is. You’re always capable of being more.

So say it’s not over until you win. You can live your dream!

Goals It’s never too late Never Give Up Success