Creating A Vision And Stickin’ To It 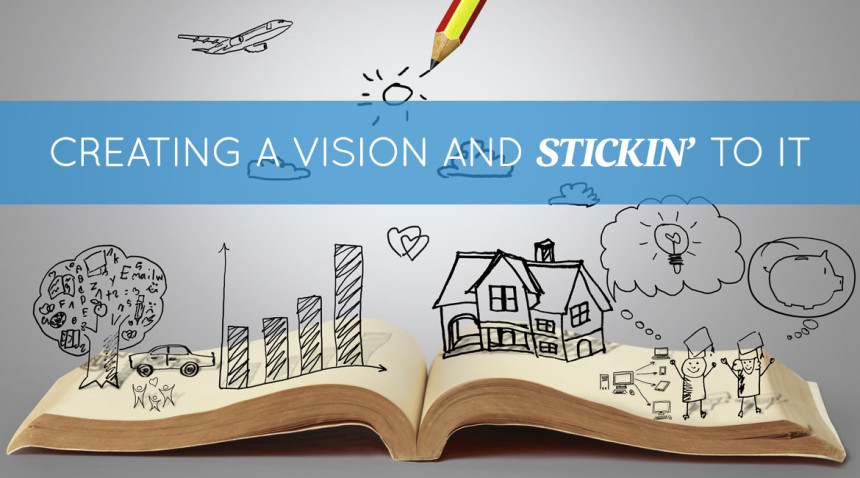 A couple of years before moving from California to Austria, the neighbor next door to my wife’s parent’s house in Austria – a father and husband – committed suicide, leaving behind much sorrow and financial debt for the family.

I’m a very empathetic person, so naturally I felt very sad for the family for their loss. While I barely knew them, and could not relieve any of their grief, I imagined being able to pay off the mortgage on the house which was suffocating the family financially. I can’t really explain it, but it felt like a calling… like something I was destined to help with.

At the time, I was creating a vision for my business, and looking to build relationships with launch partners who could help give things a kick-start through joint venture partnerships. I never told anyone in my life to this day (until now :-)), but I recorded and sent a video to one potential partner, explaining how I wanted to do a product launch and generate a couple hundred thousand dollars so that I could gift it to this family to help lighten their load. If I would have told anyone I knew, they would have thought I was crazy. I had shared smaller intentions to help others, and even the small things were thought ridiculous – so I decided not to even bother and just work silently towards this goal on my own.

Nothing ever came from the partner invitation, despite my moving/compelling story and intention; the potential partner didn’t even respond, and I shrugged my shoulders… but the desire to help never went away.

After moving to Austria, my wife and I moved in to the bottom floor of her parents’ house, which is situated next door to the family mentioned above. About a year later, the neighbor next door, who rented a small attached apartment suite from the family previously mentioned, was battling with depression and accidentally committed suicide. He was found dead in the room directly on the other side of where my home office resided. This moved me deeply, and I wrote a letter about this event and sent it to everyone I knew, encouraging all of us to be friendly neighbors and do what we can to share our light and energy with others because we never know what difference it may make – even a simple smile passing on the street.

Fast forward about a year later, and my wife and I purchased a condo across the street. I’d gotten to know many neighbors and enjoyed exchanges of energy, often on some “deep” topics, even just in casual passing.

Fast forward about another year later, and the family previously mentioned decided to put their house on the market for sale – which included the apartment where their renter had committed suicide. It had become too big of a burden and they were ready to move on.

To make a very long story short, my wife and I sold our property in San Diego, and sold our condo in Austria so that we could buy the house. While there were obstacles in our way and we didn’t even have money for the down payment, we committed to buy the house and got busy on strategies to fund it after that. Everything came together in the nick of time and progressed relatively easily. We now live in the main house, and my office space occupies the small apartment suite. It took some psychological and spiritual strength to get over the deaths associated with the property, but the feeling of peace and the feeling of having helped to release restrictive energy through these transactions makes it all worth it; and I am happy and grateful to be enjoying the new home and office space, along with the story behind how everything came together.

Another great benefit is, while we did not make any profit on the sale of our Austrian condo (actually, we lost money) – we sold it to close friends whom we love and adore. Win-win-win.

On my vision board for 2015 was paying off our California property and our Austria condo. We did both of those things through their sale – and bought this new home and office space. And my vision from a few years back of relieving this family from their massive debt also came to fruition… not originally as I had planned, but nonetheless, it came true – and everyone is happy and is experiencing a new level of freedom. Weight off the shoulders. Bliss. Additionally, one of the sons’ just had twins a few weeks after the sale completed. New life has begun.

The point behind this story which is relevant to you is this: I’d like to invite you to create a vision and stay committed to it, even though you may have no idea how or when it will come true. Exercise patience and let the law of gestation do its work. Especially when the vision includes helping others in some way, in due time and when you hang out inside the right energy fields, it will come to pass. Set the intention, and surrender to the process.

Trace Haskins is known around the world as “The Doodle Video Dude”. This month, he teamed up with Bob Proctor, Sandy Gallagher and Wolfgang Sonnenburg to create a series of training videos that help you multiply your income while making a difference in the world and getting deeply re-connected to your soul. It’s especially created for those of you who are in Europe, too, because after going through the series, you are given the opportunity to work with Bob, Sandy and Wolfgang LIVE in person in Austria. Click here for instant access to this entertaining and highly effective video series, plus the opportunity to work with this amazing team LIVE and in person >> http://go.proctorgallagher.73445.7723.digistore24.com/traces-story